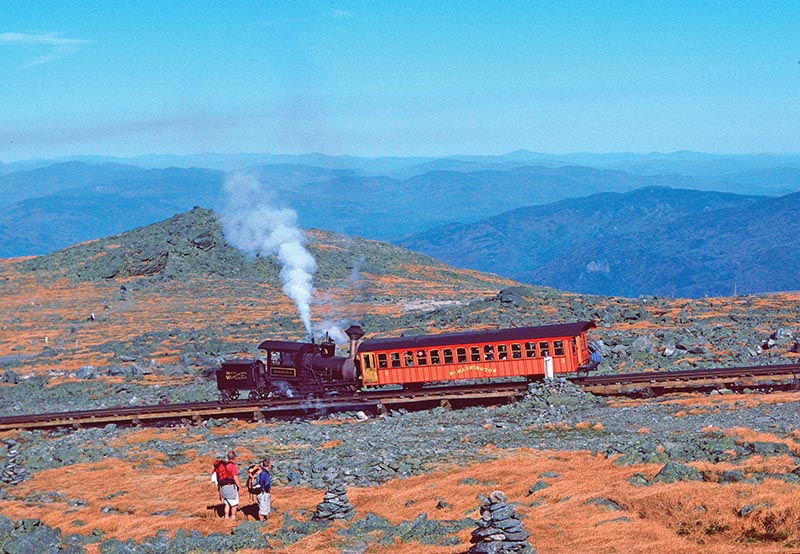 Cog railways were an industrial intrusion into nature like few others. In October 2002, a Mount Washington Cog Railway train approaches the summit of its namesake peak. —Justin Franz photo 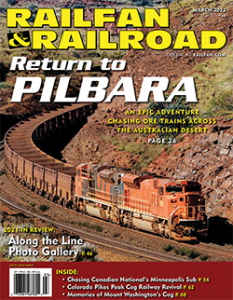 The extension of railways across the North American continent was also the extension of industry into the farthest reaches of the natural world. They were a direct link between distant resources and the factories that turned those resources into finished goods. This month we explore two railways that seem, at first glance, to be exceptions to this rule — Broadmoor, Manitou, & Pikes Peak Cog Railway and Mount Washington Cog Railway.

Both the Pikes Peak and the Mount Washington carry passengers, but no freight. Neither line has anything to do with workshops, mills, or mines. These are tourist lines built to bring sightseers to better views. While we sometimes call tourism an “industry,” it’s pretty far removed from our idea of smoke-belching factories and commerce.

At a second glance, however, it becomes clear that these are very much industrial things. In order to reach their respective summit terminals, both the Pikes Peak and Mount Washington rely on a special manner of propulsion, in which a large gear or cog on the locomotive interlinks with the teeth of a rack rail laid between the running rails. The result is that the locomotives have extreme traction even on steep slopes, where conventional wheels on rails would slip backward.

What is remarkable is that this was not the invention of some Gilded Age, Jules Verne wannabe. Cog railways are, in fact, as old as steam locomotives themselves, having been introduced to the world at the same time, on the same railway — on the United Kingdom’s Middleton Railway in 1812. Moreover, the Middleton was thoroughly industrial, with the cog system intended to provide the traction necessary to move coal. When promoters extended cog railways up Mount Washington (in the late 1860s) and Pikes Peak (in the late 1880s), they were borrowing technologies deeply rooted in industry.

More than this, though, both cog railways are examples of how, in the 19th century, the division between industry and the natural world was significantly different from our own. Today, we often think of nature as a pristine place, absent of human activity, a place that belongs to animals and the weather. Certainly there were some in the 19th century who thought similarly. If you grew up in the U.S., in high school you probably had to read Emerson or Thoreau, writers who wrote nature with a capital ‘N’ and who saw human intervention in it as unnatural.

Their view, however, was not the popular one. For promoters of these cog railways, as well as those who rode them, the idea of extending industrial transportation into the farthest reaches of wilderness was obvious — these mountains were not sacred to them, they were to be turned into profit. We may see the Mount Washington today, and think its locomotives, belching out steam, stand in sharp contrast to the rough granite of the mountain. To 19th century eyes, they were both natural — after all, what was a steam locomotive if not an expression of the power of water? What was an iron rail if not the ultimate form of geologic might? Sure, there might be objectionable aspects — some must have complained of the smell — but beaches, wetlands, and volcanos all stink, too.

If someone today proposed a cog railway up a mountain, I doubt I’d be for it. At the same time, when the Pikes Peak shut down in 2017, it felt like a loss. The cogs, wild and improbable though they are, are part of the landscape now, part of a world where nature and the railway are not at odds, but in harmony.

This article appeared in the March 2022 issue of Railfan & Railroad. Subscribe Today!