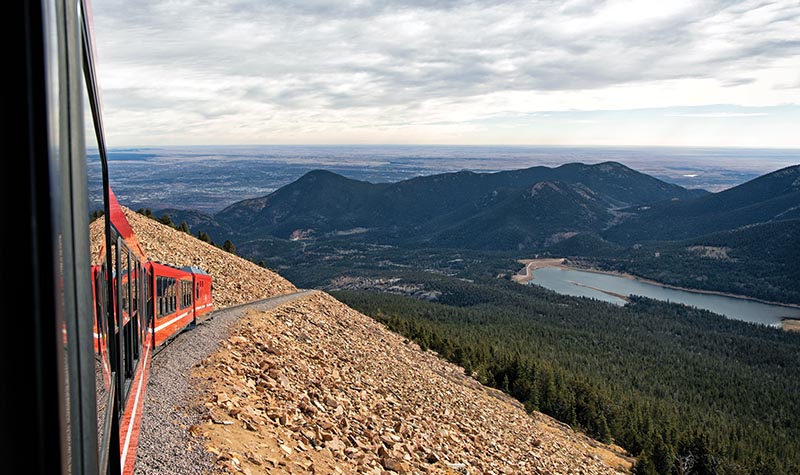 A Pikes Peak Cog Railway train climbs the slopes of its namesake mountain at a spot called Windy Point. In the distance, you can see Colorado Springs, Colo., on the left, and Lake Moraine on the right. —Justin Franz photo 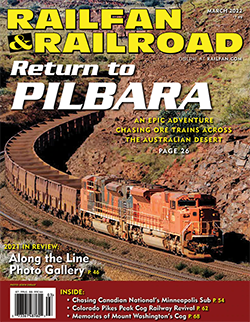 By Ralph Spielman/photos as noted

In March 2018, the future of Colorado’s Broadmoor, Manitou & Pikes Peak Cog Railway was in doubt. The Broadmoor Hotel, which owns the railway operation, issued a terse press release stating that after 126 years in business, there would be no spring 2018 reopening, after an almost-six-month shutdown. The release went on to point out that operations were doubtful for the railway’s foreseeable future, given the lack of maintenance on the equipment and right-of-way for the previous decade.

Six months before that press release was issued, the railroad had been shut down in late 2017 for maintenance. But that pause in service revealed that a lot of money would be needed to upgrade the century-old cog railway to 21st century standards. Many thought the railroad was doomed. Was this to be the end of more than a century of operation, pushing the iconic cog railway to the pages of history like other local railroads, such as Colorado Midland, Midland Terminal, and Mount Manitou Incline Railways? 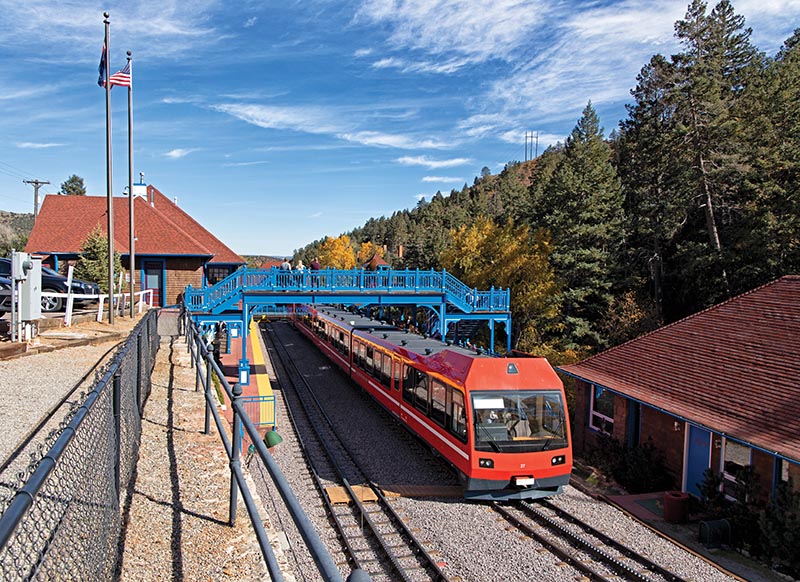 ABOVE: A train prepares to depart the rebuilt Manitou Springs, Colo., station on October 22, 2021. The building on the right was once a trolley depot but now houses the cog railway’s main offices. —Justin Franz photo

Fortunately, that didn’t happen. After a hiatus of almost four years, Broadmoor, Manitou & Pikes Peak Cog Railway resumed running in May 2021 and, following a $100 million rebuild, the future of the world’s highest cog railway appears secure. The nine-mile railroad is one of only two cog railways in the United States and it’s also among the busiest tourist railroads in Colorado (a state with more than its fair share of heritage railways).

Early History
The plan to build a railroad to the summit of Pikes Peak dates back to the early 1880s. In 1883, a group of investors began to work on a 27-mile-long narrow gauge adhesion railroad to the summit, but financial issues quickly torpedoed that effort. The idea for the cog railway is credited to former Manitou Springs Mayor John Hulbert, a Civil War veteran and investor in the original failed venture. The newly chartered Manitou & Pike’s Peak Railway Company of 1888 used a standard gauge, nine-mile-long, center double-toothed Abt Rail cog system to cope with grades up to 25 percent along the way (the average grade is 16 percent). In September 1889, hundreds of foreign laborers began construction; almost all the work was done with simple tools — pickaxes, shovels, and wheelbarrows. After two years of hard, back-breaking work, the first train reached the 14,115-foot summit on June 30, 1891. Three Baldwin 26-ton coal-burning steam engines were ordered for the start of service, and by 1906, three additional steam locomotives joined the roster. Steam power was the mainstay on the railroad until September 1958. 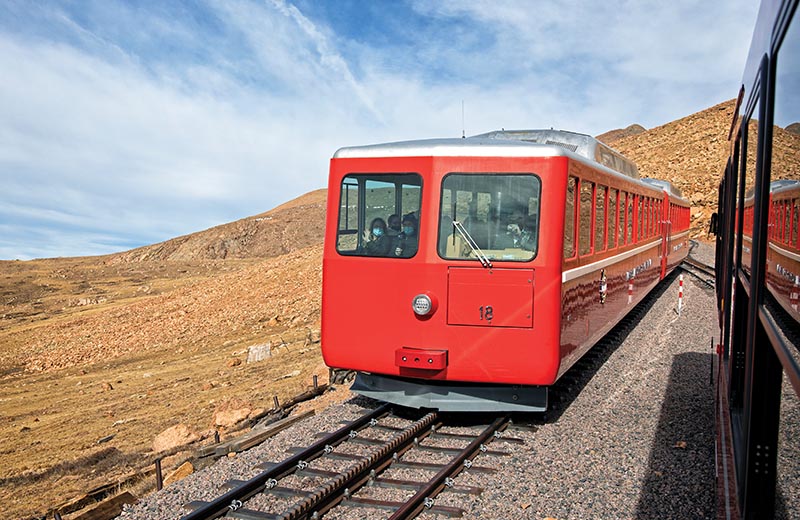 ABOVE: Two trains meet at Windy Point, elevation 12,129 feet, on October 23, 2021. On the left, one of the older Swiss Locomotive & Machine trains built in the 1970s and 1980s keeps the main line going downhill while one of the new Stadler trains (right) stays in the siding. —Justin Franz photo

Over the last 130 years, there have been only four owners of the line. Current owner Phillip Anschutz, through his Anschutz Corporation, purchased the assets of Broadmoor Hotel, including the railroad, in 2011. Anschutz is no stranger to railroading, having purchased Denver & Rio Grande Western back in 1984 (he sold the Rio Grande, by then combined with Southern Pacific, to Union Pacific in 1995). He also owns Grand Canyon Railway through his Xanterra Travel Collection, a resort management company that does work mostly in national parks, including Grand Canyon, Yellowstone, and Glacier.

Rebuilding
By 2017, Pikes Peak Cog was a tired and rundown railroad. In October of that year, the decision was made to close the railroad for the winter to do some maintenance and reopen the following spring. Until 2007 the railroad rarely operated in winter, and major maintenance work happened during the off-season. For more than a decade, a lot of that work had been ignored. Also receiving attention was the railroad’s rolling stock fleet, a mix of home-built, General Electric, and Swiss Machine & Locomotive railcars built throughout the 20th century, some as early as 1938 and others as late as the 1980s. But the work needed on the equipment and right-of-way was much greater than anticipated and in 2018, the future of the railroad was very, very uncertain. Some doubted it would ever run again…

Read the rest of this article in the March 2022 issue of Railfan & Railroad. Subscribe Today!