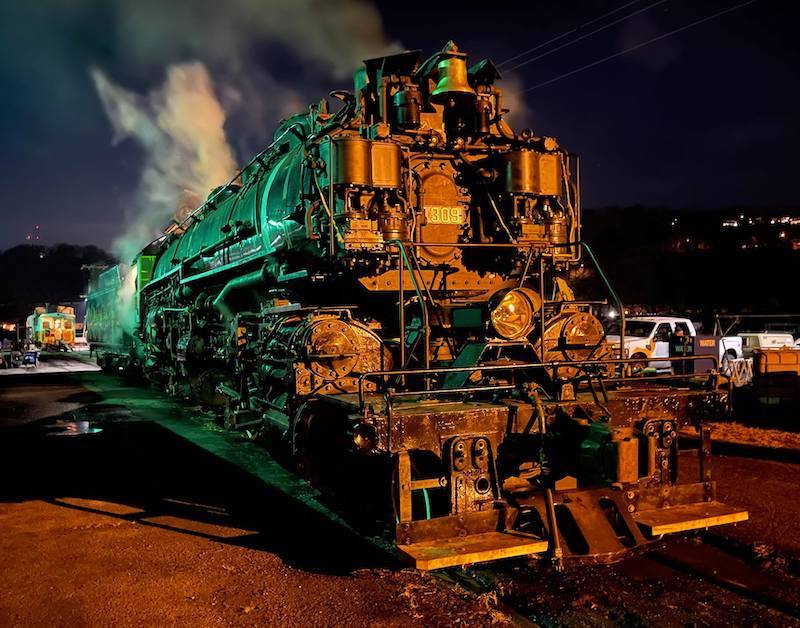 RIDGELEY, W.V. — Following what will easily go down as one of the toughest years in railway preservation history, the Western Maryland Scenic Railroad ended 2020 with a win. On New Year’s Eve, Chesapeake & Ohio 2-6-6-2 1309 moved under its own power for the first time in 64 years.

The long-awaited return of the articulated Baldwin was a bright spot in what has been a tough year for the tourist railroad industry trying to navigate a global pandemic that upended normal life and forced many operations to shutter their doors. Just months ago, the Western Maryland Scenic told supporters it was in “survival mode” and that its own future was uncertain.

But things are already looking up for the railroad. “We decided to ring in the new year early! 2021 here we come!” the railroad posted on Facebook on Thursday evening, along with a video of 1309’s first move.

Locomotive 1309 has been under restoration at the Western Maryland Scenic’s shop in Ridgeley since 2014. While the railroad made significant progress during the first few years, the effort was also marked by setbacks, including fundraising struggles and the theft of key parts. Earlier this year, with help of multiple grants and an aggressive fundraising effort, the restoration continued at full steam.

The locomotive was built in 1949 and was on display at the B&O Railroad Museum before being purchased by the Western Maryland Scenic. The restoration cost approximately $3.5 million.