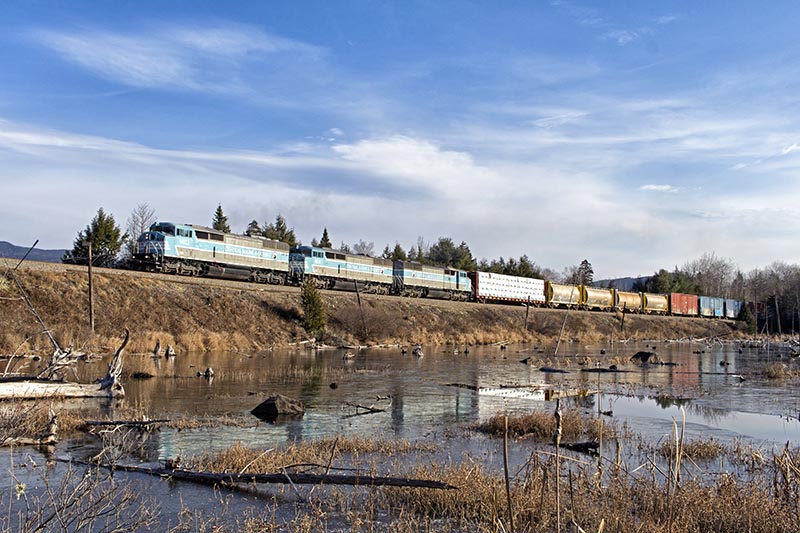 Nearly two decades after they were briefly banned on the line, six-axle locomotives are back in a big way on Central Maine & Quebec, which purchased 10 ex-Canadian Pacific SD40-2F locomotives, dubbed by railfans as “Red Barns.” A trio of “Blue Barns” leads westbound Train 1 across a remote causeway near Onawa on November 21, 2017.  Justin Franz photo

By Justin Franz and Timothy Franz/photos as noted

We’ve made the drive so many times, I can nearly remember all of the turns by heart — even if it’s been a few years. Jump on Interstate 95 and head north to Newport where you get off at Exit 157. Take Route 7 north to Dexter where you turn onto Route 23 near the Hannaford supermarket. If you pass the Dunkin’ Donuts, you’ve gone too far. At Guilford — the town, not the railroad — you’ll briefly head west on Route 6 before taking a right on Route 150. The number of houses starts to dwindle and the mountains of western Maine come into view. At Goodell Corner, Route 150 bends right, but follow the sign to Willimantic. You’re getting close now. About five miles down Elliotsville Road, the dirt road you need to take will pop up on the right. Blink and you’ll miss it, but it’s been a long time since either one of us has missed it. Drive three miles down the Onawa Road and you’ve arrived: the heart of what once was — and is again — the Canadian Pacific Railway in Maine.

When most people think of Maine railroading they likely conjure up images of Maine Central along the rockbound coast or Bangor & Aroostook hauling the harvest of the north country to markets south. But for Dad and me, the greatest show in Maine railroading has always been CP’s rugged and remote shortcut across the state to the Maritimes, a route that has been known by a myriad of names in the last quarter-century.

In the mid-1990s, right about the time I was entering elementary school, CP pulled up stakes east of Montreal. The railroad’s International of Maine Division (also known as the “Short Line”) and a number of other routes in Quebec, the Maritimes, and Vermont, were spun off to other carriers. The line would change hands several times in the coming quarter-century. One of those railroads would burst onto the New England rail scene with retro liveries that heralded a promising new era, only to be taken down by tough economic conditions and internal financial troubles. Another would pick up the pieces and limp along for a decade before ending in disaster. 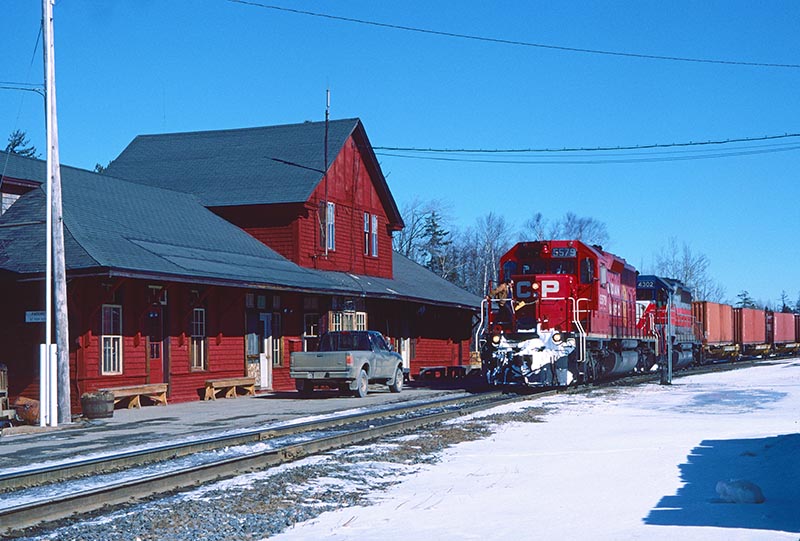 A Canadian Pacific SD40-2 leads intermodal Train 931 at Jackman, Maine, on February 27, 1999. A derailment a few days later would result in six-axle locomotives being banned from the Moosehead Subdivision for a number of years after. Justin Franz photo

One finally succeeded, setting the stage for CP’s improbable return in 2020. No matter the name or the paint scheme, though, the old Canadian Pacific route across Maine has always been a special place to our family.

While CP had been tasked with building a transcontinental railroad to reach the western provinces, it connected only Montreal and Vancouver, leaving everything in eastern Quebec and the Maritimes to its competitors. Initially, CP was unconcerned that it did not touch the Atlantic Ocean, particularly since European traffic was still accessible via the Port of Montreal and the St. Lawrence River (unless, of course, it was frozen over in winter). But soon after reaching the west coast, CP President William Cornelius Van Horne realized having a railroad that fell 750 miles short of being a true coast-to-coast transcontinental was unacceptable and the company began looking for a way to connect the Atlantic to the Pacific.

Still strapped for cash following the construction of its main line to the Pacific, CP found other ways to extend its reach east by buying completed railroads or railway charters. In the late 1880s, CP cobbled together what would eventually become its eastern main line by purchasing two short lines connecting Waterloo and Lac-Mégantic, Que., New Brunswick Railway from Vanceboro, Maine, to St. John, N.B., and a charter for a proposed railway from the Quebec-Maine border to Mattawamkeag, Maine. To save some additional time, CP got trackage rights on Maine Central from Mattawamkeag to Vanceboro, which had been constructed in 1871. 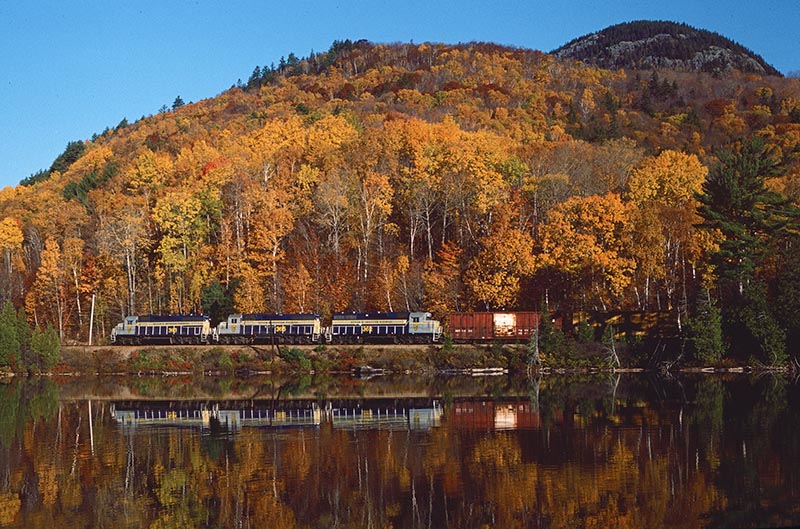 A trio of Bangor & Aroostook GP38 locomotives leads Train 901 past Big Greenwood Pond near Onawa, Maine, on October 19, 1997. Just moments before the train arrived, the near-perfect reflection was nearly destroyed when a local beaver slapped his tail on the water to protest the photographer’s decision to stand on his log home. Timothy Franz photo

With much of the rail already down, CP began to fill the gap between Lac-Mégantic and Mattawamkeag in 1887, building a railroad through one of the most remote parts of Maine. From the lakeside community of Lac-Mégantic, the railroad climbed the Notre Dame Mountains to the international border (known as Boundary, elevation 1,853 feet), where it began its descent toward Jackman, Maine. From there, it continued east through the wilderness, passing Long Pond and Little Brassua Lake toward the state’s largest body of water, the 75,451-acre Moosehead Lake. The railroad followed the shore to Greenville before again diving into the woods, twisting and turning past numerous lakes and mountains, including 1,960-foot Borestone Mountain. East of Greenville, the railroad built two large trestles, the 894-foot-long Wilson Stream Trestle and the 1,227-foot-long Onawa Trestle over Ship Pond Stream. From the small community of Onawa, it was another 17 miles to Brownville Junction, where the railroad interchanged with Bangor & Aroostook. From Brownville Junction, the railroad continued another 43 miles to Maine Central track at Mattawamkeag. 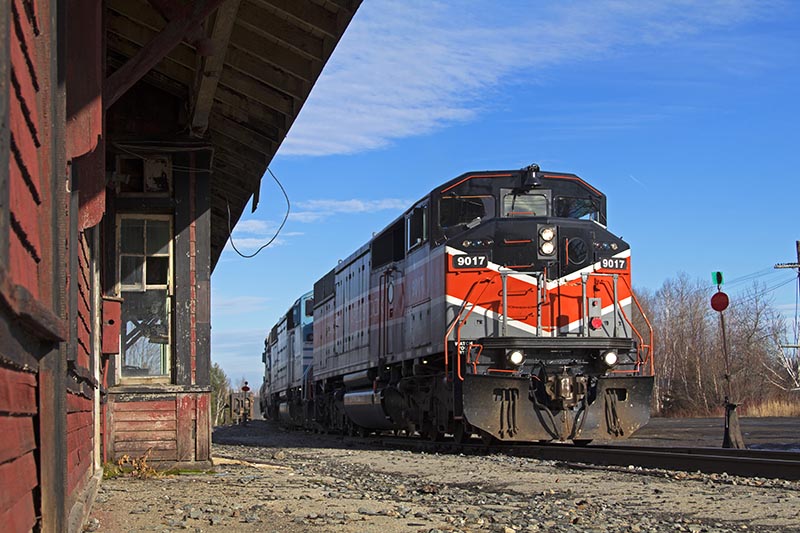 Canadian Pacific completed its line across western Maine on December 10, 1888, at a lonely spot called Packard Brook, 12 miles east of Brownville Junction. Because winter had already set in and additional work was needed before it could be ready for service, the first train did not run across the line until  June 1889.

While the Intercolonial Railway (later to become Canadian National) had beaten it to the Maritimes by more than a decade, CP’s route did have one major strategic advantage against its competitor, which had built exclusively in Canada — CP’s Short Line across Maine was 80 miles shorter…