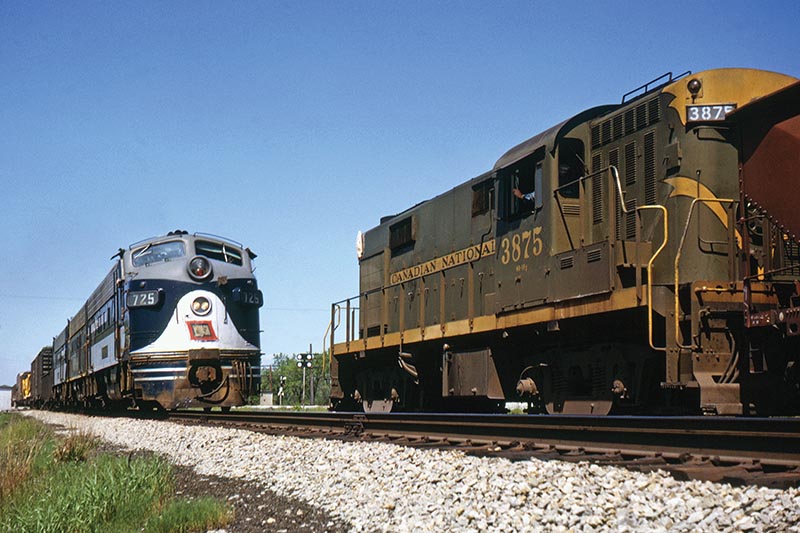 London-built Wabash F7A 725 meets Canadian National Extra 3875 West at Canfield Junction, Ont., on March 28, 1966. The 725 would eventually be the last to run and is now preserved at the Monticello Railway Museum in Illinois. James A. Brown photo 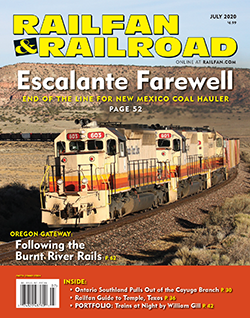 By Greg McDonnell/photos by the author

The old Canada Air Line ain’t what it used to be. Wandering slowly through the woodlots and farm fields east of St. Thomas, Ont., on a rainy spring day, Ontario Southland FP9s 6508 and 1401 chase the ghosts of Wabash F7s over the onetime speedway. The rails of Canadian National’s Cayuga Spur are rusted and wobbly, the ballast muddy and weed-grown. Broken ties bleached gray with age jut upward from the dirt. The line’s signature steel trestles are shrouded with overgrowth and streaked with rust. Limp strands of abandoned code line hang from forgotten telegraph poles — all faint reminders of better days on a railway line in its death throes.

Time has run out for the 25.5-mile St. Thomas–Courtland Cayuga Spur, one of the last remnants of Canada Air Line completed by Great Western Railway in 1873. The name dates from a time when “air line” meant the shortest distance between two points on land. Ontario Southland, a reluctant interim operator of the CN-owned line, is calling it quits. On this, the last day of April 2020, the crew aboard the A-A pair of FP9s dispatched from the OSR shop at Salford have their orders — lift one last car from Aylmer, clean out Tillsonburg, and close the books on 147 years of railroading on the line between New Sarum and Courtland. 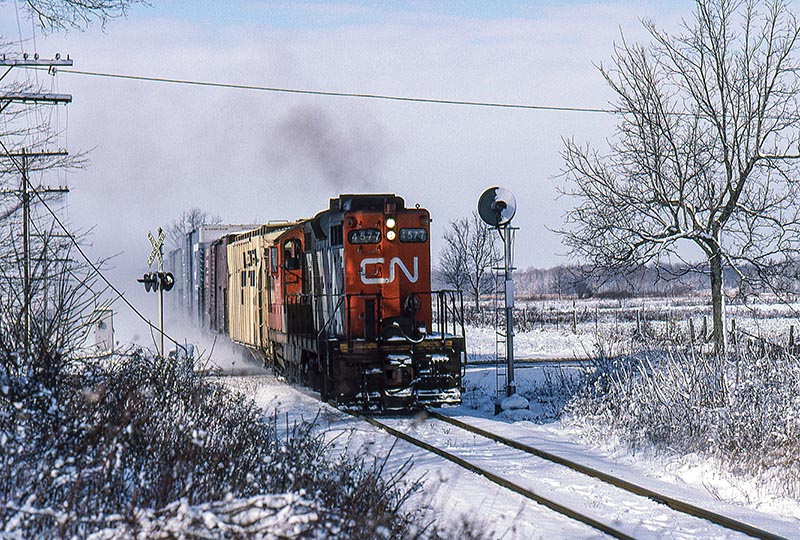 The FP9s keep a funereal pace as they stroll through Glencolin and Corinth with a single car. Soaring high above Big Otter Creek on a spectacular 1,249-foot-long, 107-foot-high steel trestle, they make a grand entrance into the town made famous in the lyrics of Stompin’ Tom Connors. “Tillsonburg, Tillsonburg, my back still aches when I hear that word.”

The sight of matched cabs on the bridge recalls days when a fleet of London-built GMD F7As wearing the dress blues of Wabash and successor Norfolk & Western ruled the Air Line. Exercising Windsor–Buffalo trackage rights granted to Wabash by Grand Trunk Railway in 1897, matched sets of made-in-Canada Fs predominated on hotshot freights across southwestern Ontario twice a day, each way, every day, through the 1950s and well into the 1970s.

As the F-units faded away, N&W Geeps and SDs took over (with a few examples from General Electric thrown in for good measure). For most of its existence as a through route, the trains of Wabash and its successors would be the lifeblood of the Glencoe–Fort Erie line. 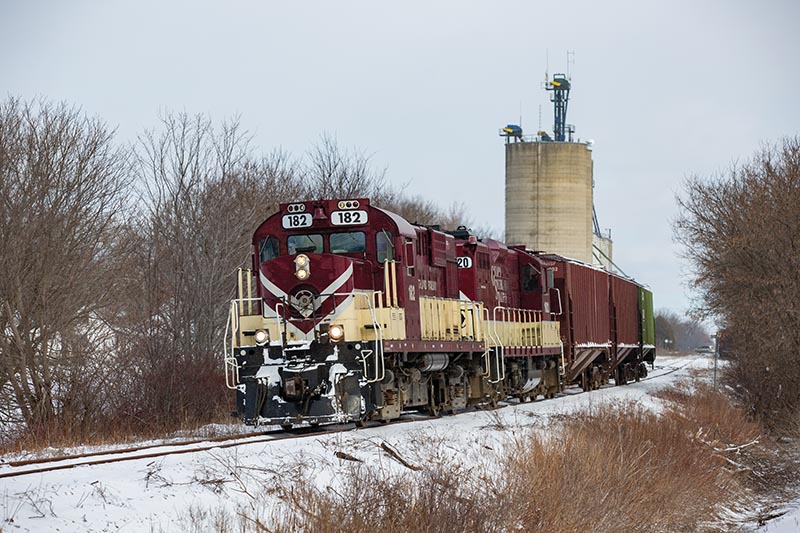 The Tillsonburg–Courtland section, with a direct connection to OSR’s Port Burwell Spur in Tillsonburg, was reactivated in late 2014, two years before the Aylmer–Tillsonburg trackage was reopened. OSR RS-18 182 and GP9 1620 depart Courtland, returning to Tillsonburg with three empty covered hoppers from Cargill on February 11, 2016. Greg McDonnell photo

Canadian National operated the Glencoe–St. Thomas segment as part of the Chatham Subdivision, then redesignated it as the Paynes Subdivision in later years. The eastern section, from the division point at St. Thomas to Fort Erie and across the International Bridge to Black Rock, N.Y., was the Cayuga Subdivision.

While Wabash made the most of the Air Line, it never rose above secondary status for CN, save for the easternmost 11 miles between Robbins and Fort Erie. That trackage became part of CN’s main route from Hamilton to Buffalo and was ultimately merged into the Stamford Subdivision between Clifton and Black Rock. Wayfreights were based out of St. Thomas and Simcoe, but as local traffic declined, the fortunes of the Air Line withered…