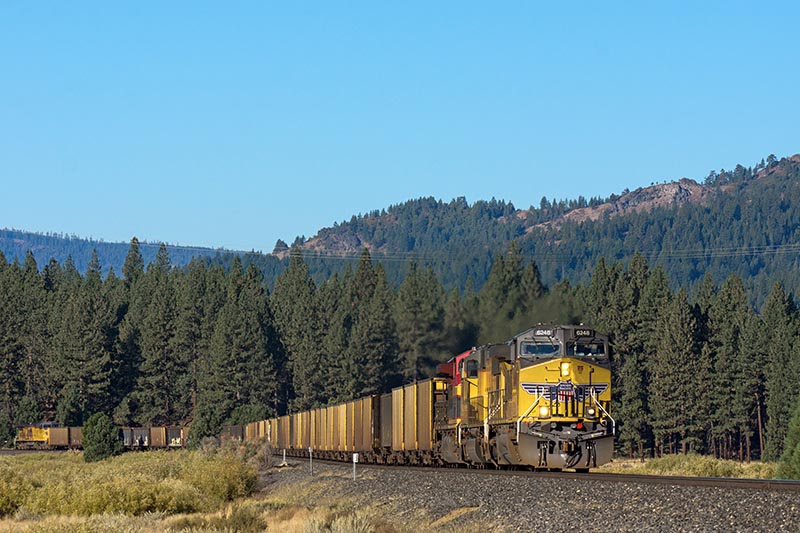 Union Pacific 6248 East, a loaded “dirty dirt” train from the Bay Area, is about to enter Portola yard for a crew change on October 14, 2018. After the new crew is aboard, it will be off to its final destination in the Utah desert.

By Adam Pizante/photos by the author

If you listen closely, you can hear the sound of a General Electric locomotive’s prime mover echoing off the massive granite walls of the Feather River Canyon, located in the Sierra Nevada in northern California between the towns of Oroville and Portola. Along the roughly 60 miles that run the length of the canyon, you will find some of the most beautiful mountain scenery in the American West along with exciting Class I railroading action.

The Feather River Canyon first saw rails when Western Pacific was completed in 1909. Indeed, the canyon gave the railroad its moniker as the Feather River Route. It was to be part of George Jay Gould’s transcontinental railroad and was largely financed by Denver & Rio Grande, another railroad in the Gould empire; WP connected with D&RG in Salt Lake City, Utah.

Great Northern was seeking to access the California Bay Area market from Klamath Falls, Ore., and joined with Western Pacific to form the Inside Gateway. Leaving the Feather River Route at Keddie Wye, WP built north to the town of Bieber, Calif.; GN built south to Bieber from Klamath Falls. The route was opened in 1931. 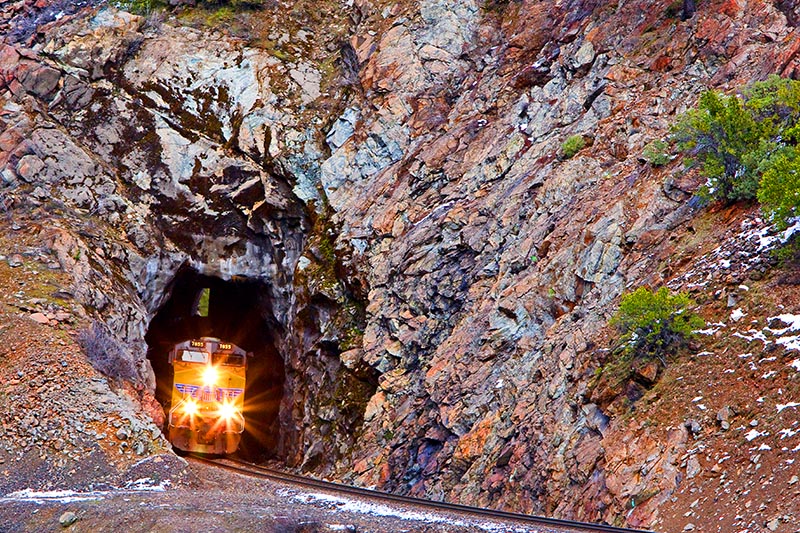 ABOVE: A Union Pacific GE ES44AC is about to pop out of an impressive rock tunnel portal near Richbar, deep in the heart of the canyon. There is a hint of snow on the ground on a cold March afternoon in 2011.

Union Pacific took over operations of Western Pacific in 1983, and swiftly started utilizing this strategic route into the Sacramento Valley and the San Francisco Bay Area, with the line becoming UP’s Canyon Subdivision. UP’s Western Pacific takeover helped UP compete with its longtime rival Southern Pacific and paved the way for the massive share of western traffic the railroad enjoys today.

Since UP’s 1996 merger of Southern Pacific, BNSF Railway has enjoyed trackage rights through the Feather River Canyon. BNSF runs on UP from Stockton to the Keddie Wye, some 187 miles. At Keddie, BNSF trains turn north up the Inside Gateway and return to home rails at Bieber to reach the Pacific Northwest via the Gateway Subdivision. When you hear a train echoing off the tall granite canyon walls from a mile away while visiting the canyon today, it could be a BNSF train rather than the typical Union Pacific yellow and gray coming around the bend. On some days, you will see more BNSF trains than UP trains west of Keddie, as Union Pacific splits traffic between the canyon and its line over Donner Pass to the south. 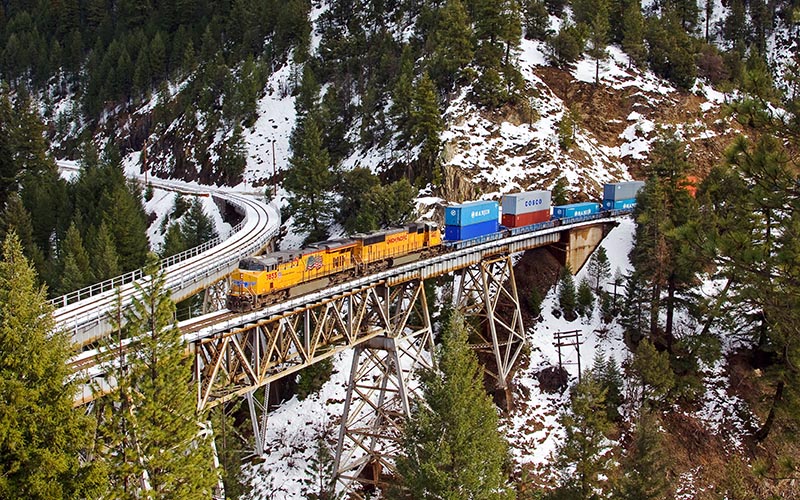 ABOVE: At the Keddie Wye, the crown jewel of the Feather River Canyon line, a dusting of snow makes for a postcard image as a Union Pacific intermodal train works its way west toward its destination at the Port of Oakland on a cold late March day in 2011.

On any given day you can expect to see anywhere from five to seven UP trains and around four to six BNSF trains. UP tends to run most of its westbound heavier trains via the Feather River Route such as coal, grain, and general merchandise trains, as well as unit autoracks, due to a more desirable 1 percent grade. UP sends lighter and empty eastbound traffic over Donner Pass. Donner also hosts all double-stack trains and “Z” trains, since it is a shorter route to Bay Area intermodal facilities. You’ll find UP will reroute a few intermodal trains over the Canyon Sub to accommodate work windows on Donner Pass, usually in the summer months.

BNSF runs general merchandise trains and, lately, unit crude oil trains through the canyon, as well as an occasional empty well-car train and less-common unit military equipment trains. Running trains in the winter months through the Feather River Canyon can be tricky due to heavy rainfall and the constant threat of mud and rock slides. It’s common in the wet months for trains to need hi-rail escorts through parts of the canyon with speed restrictions…