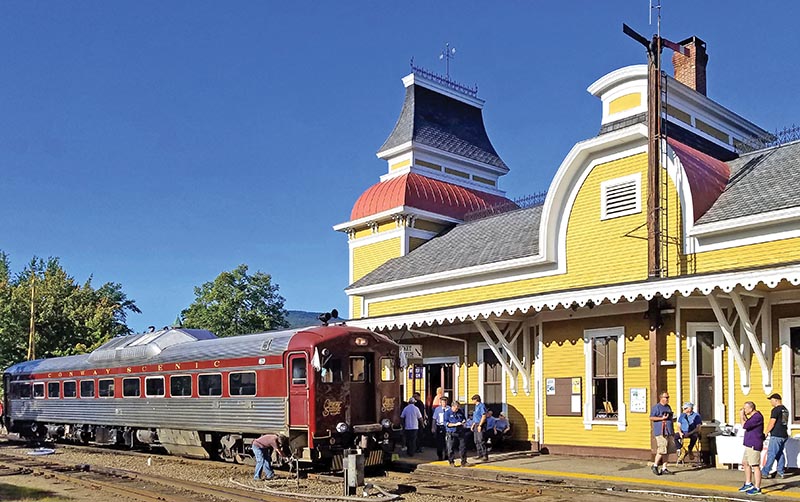 Conway Scenic 23 (ex-NH 23) arrives at North Conway, N.H., after a day of operating Railfan Day trips on September 2, 2017. The car is used for charters and to handle off-season traffic throughout the operating season. Otto M. Vondrak photo

By Justin Franz and Otto M. Vondrak/photos as noted

Self-propelled passenger cars are not a new concept, with the first practical examples emerging from the McKeen Motor Car Co. as early as 1905. These early cars relied on a mechanical drive straight from the motor to the axles and proved to be unreliable. General Electric produced a model that involved a motor turning an electric generator to power axle-mounted traction motors, but ceased production by 1917. The 1920s saw renewed interest in the gas-electric motor car as a way for railroads to provide service on low-density branch lines while reducing operating costs. Hundreds of successful cars were produced by Electro-Motive Corp. (which was acquired by General Motors in 1930 to become EMD), American Car & Foundry, and trolley manufacturer J.G. Brill. While these early gas-electric “doodlebugs” filled a need, they often left poor impressions on the traveling public due to their spartan accommodations and noxious exhaust odors.

The Edward G. Budd Manufacturing Company had been making a name for itself in the automotive industry through the 1920s, and turned to the design of railroad equipment in the 1930s, incorporating a patented method for welding stainless steel panels to make lightweight vehicles. The company fielded two self-propelled streamlined cars equipped with rubber tires in 1931 and 1932, but these experiments were short-lived. The first success came in 1934, when Budd produced the articulated three-car Pioneer Zephyr in 1934 for Chicago, Burlington & Quincy. Bolstered by the success of the Zephyr train sets, Budd developed a pair of two-car Prospector trains for Rio Grande in 1941. While innovative for the underfloor mounting of the motors and featuring many modern passenger comforts, the trains failed to “pan out” as planned. 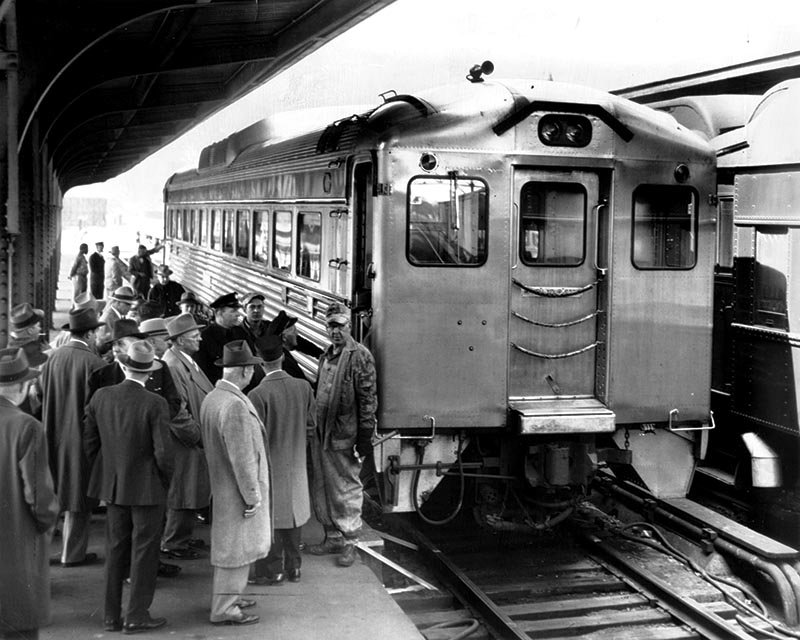 New York Central was one of the first customers for Budd RDCs, making its initial purchase in 1950. Originally assigned to Boston–Springfield, Mass., trains in May 1950, RDCs found their next assignment operating between Syracuse, Rochester, and Buffalo, N.Y., in May 1952. To advertise the new local service, a shiny new RDC was placed on display at the station in Rochester on April 24, 1952. Rochester & Genesee Valley Railroad Museum photo

After the end of World War II, the Budd company returned to the railcar business, preparing to re-equip the nation’s railroads with modern, lightweight, streamlined trains. The postwar economy was a prosperous time for many, but America’s railroads were already seeing a dramatic 43 percent drop in passenger traffic from 1944 to 1948. While railroads attempted to win back customers by introducing flashy new streamliners, Budd once again turned to the development of a low-cost, self-propelled vehicle.

Based on a standard 85-foot passenger car, the most important feature of the RDC was the motors mounted beneath the car to maximize space for revenue. Deciding against electric traction, two diesel engines employed a torque converter to bring power to the axles. Ease of maintenance was a huge selling point, as the diesel assemblies could be repaired or replaced without heavy cranes or a service pit. Horsepower-to-weight ratio was such that acceleration would rival that of comparable electric traction cars. The controls were designed for ease of use, and allowed for cars to be operated singly or as multiple-unit. Welded trucks and disc brakes were further contributions to the car’s modern design. 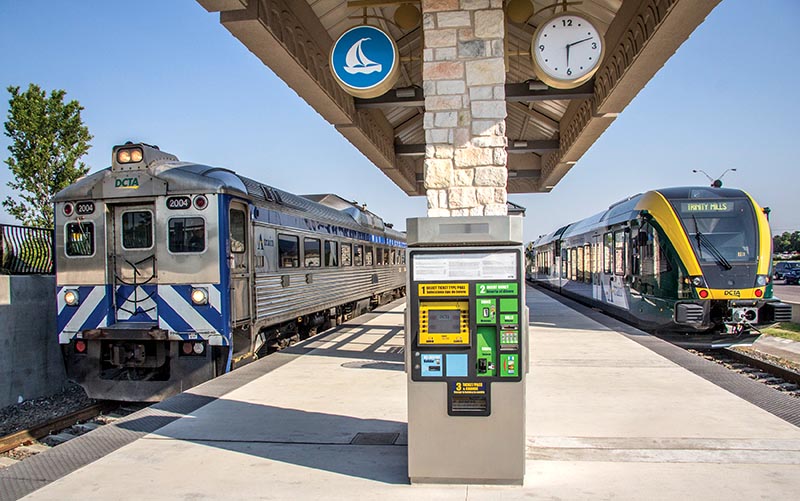 Vanquished meets victor at Highland Village/Lewisville Lake station on Denton County Transit Authority’s “A-Train” light rail line on June 25, 2012. The former DART RDCs were leased for a year when the line launched service in 2011. When new Stadler DMUs were delivered, the RDCs were returned to DART and sold at auction in 2017 to AllEarth Rail in Vermont. Blair Kooistra photo

Prototype 2960 made its debut on August 1, 1949, and performed a series of successful tests on Pennsylvania Railroad’s Delmarva Division, followed by a coast-to-coast railroad tour. While the unit was testing on Western Pacific, New York Central placed an order for the first RDCs, numbered 2991 and 2992 (renumbered M450 and M451). They were delivered in April 1950 and were placed in service on the Boston & Albany route that May. The cars were an immediate success, and helped the railroad reduce operating costs while providing modern cars with bright fluorescent lighting, air conditioning, and comfortable seating. Orders began to pour in from around the country and Budd strained to keep up with production.

The Rail Diesel Car was produced in four configurations: the RDC-1, a coach with seating for 90; the RDC-2, a combination baggage-coach with seating for 70; the RDC-3, a railway post office with seating for 48; and the RDC-4, a 73-foot RPO with no passenger seats. A fifth variation, the RDC-9, was created for Boston & Maine as a powered coach with no cab controls, seating 94. Production included 398 total cars from 1949 through 1962, both domestic and international. While some cars were produced under license by foreign builders, our updated roster includes only cars built at Budd’s Red Lion plant outside Philadelphia…