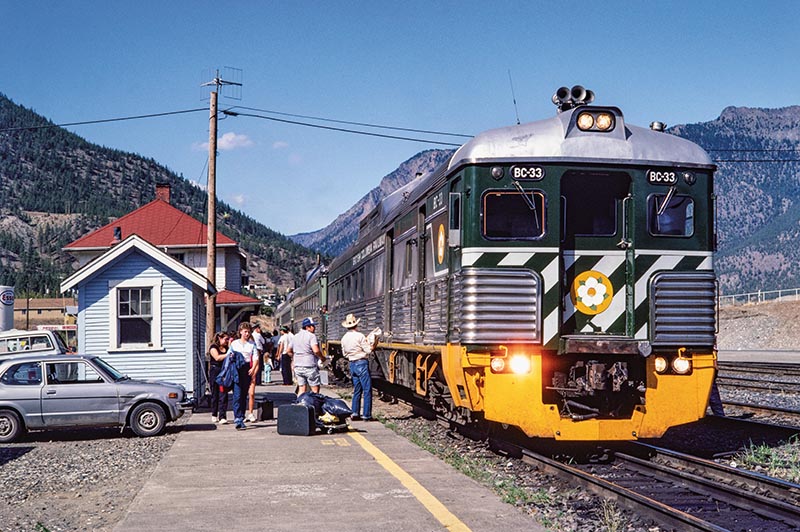 Four Budd Rail Diesel Cars make up the southbound Dayliner at Lillooet, B.C.,  on August 13, 1983. In the lead is RDC-3 BC-33, followed by RDC-1 BC-11, RDC-1 BC-12, and RDC-3 BC-31. This consist is the combination of two pairs of RDCs; one came up from North Vancouver on the morning’s northbound run and the other came down from Prince George. The four RDCs will run south to North Vancouver. The station was built in 1931 after the railroad was re-routed through Lillooet.

My first exposure to British Columbia’s BC Rail operation was on a trip in 1983 to the Pacific Northwest with a friend from college days in Springfield, Mo., Ken Albrecht. That was also my first trip to the West, and I couldn’t have had a better guide than Ken, who not only knew the railroads but also had a keen photographic eye.

On any BC Rail trip of the late 20th century, one thing you were sure to see was the Budd cars. With the Rail Diesel Cars (RDCs), Budd’s intention was to offer a solution to the passenger train dilemma that had developed in the immediate post-streamliner period. Operating costs could be lowered with RDCs as opposed to full-length trains, and railroads were looking for solutions to diminishing profits as America turned to automobiles for personal travel.

In the mid-1950s, predecessor Pacific Great Eastern acquired RDCs and put them in operation, hauling passengers through some of the finest remote scenery in North America. By the late 1990s BC Rail was looking to exit the passenger business, with mounting losses and a political climate that favored its demise. This didn’t sit well with a significant portion of the province’s population. At the dawn of the 20th century, British Columbia’s Native Americans (referred to as “First Nations” peoples in Canada) had allowed the railroad to be built across their land under the condition that there would be passenger train service “forever.” This condition was a change from their original proclamation on May 10, 1911, that stated, in part, “We claim that we are the rightful owners of our tribal territory, and everything pertaining thereto. We also wish to protest against the building of railway depots and sidings on any of our reservations, as we hear is projected.” Tourist operators up and down the line believed most of their clientele arrived and departed via the railroad, and feared the economic impact that might result from the loss of passenger train service. It turned into a long and complicated tale. 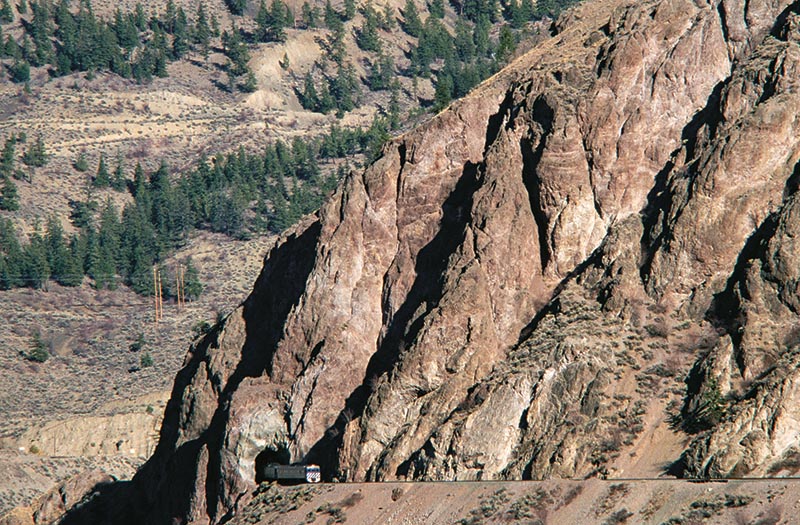 The last northbound run of the Cariboo Prospector between Lillooet and Prince George disappears into the tunnel south of Gibbs at 1:40pm on October 30, 2002, in this view looking north.

In 2002, “the end is near” rhetoric for the Budd cars began to pervade the news as the railroad sought to kill off passenger train service. But more than the passenger deficits was behind the push. BC Rail was positioning itself to be sold, and wanted to attract a suitor. It believed the perceived liability of the passenger service could negatively impact any acquisition. The winds of change were blowing, and the Budd cars were in peril.

On the trip with Ken we’d shot the Budd cars. For us they were second fiddle to BC Rail’s exotic fleet of Alco and MLW power, but when in B.C., catching the Budd cars was inevitable due to their daylight runs across the system between North Vancouver and Prince George. On Friday, August 12, 1983, Ken and I drove to Lillooet, arriving at dusk and shooting night shots of an RS-3 and an M-630. The next day, our first full day on BC Rail, was spent chasing freights north of Lillooet, but in the middle of the afternoon we captured the first Budd cars I’d ever seen in regular service, trundling southbound into Lillooet on Train 2, which was then called the Dayliner. 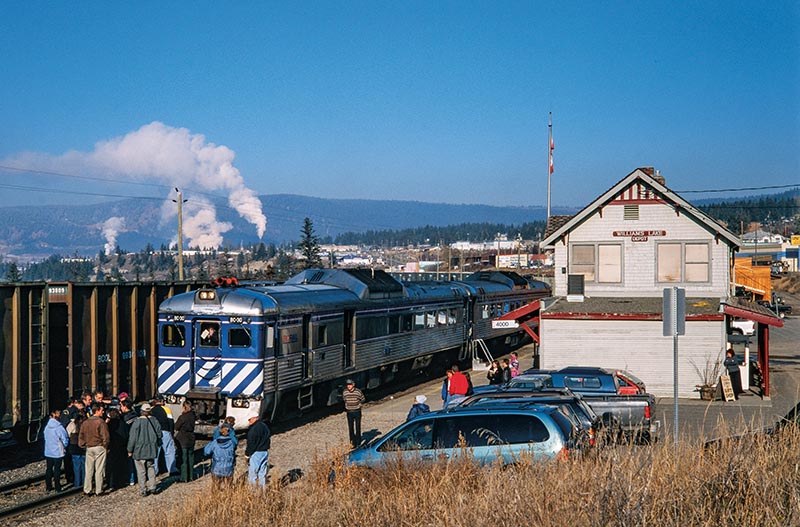 In Williams Lake, a small group of protesters camped out in front of the last train. The delay wasn’t significant, but it gave a following freight a pause, allowing us to capture that as well. Carl can be seen in the crowd filming with his blue jacket with two horizontal white stripes. He loves being behind a camera.

The Dayliner operated daily between North Vancouver and Lillooet, and three days a week — Mondays, Thursdays, and Saturdays — between Lillooet and Prince George, a routine that basically never changed for the rest of the train’s existence. Because our first full day of shooting on BCR was a Saturday, the first Budd cars we caught were on the southbound run from Prince George. The northbound run from North Vancouver left early that morning and was parked in Lillooet by the time we got back from our freight escapades — on-time arrival was 12:35 p.m. Once the southbound from Prince George got in at 2:50pm, the two trains were combined and ran south, leaving at 3:20 p.m. We photographed the two pairs of RDCs being combined and drove south to shoot them along the north end of Seton Lake. Though I’ve always concentrated on freight railroading, there was an appeal to the Budd cars that was undeniable…