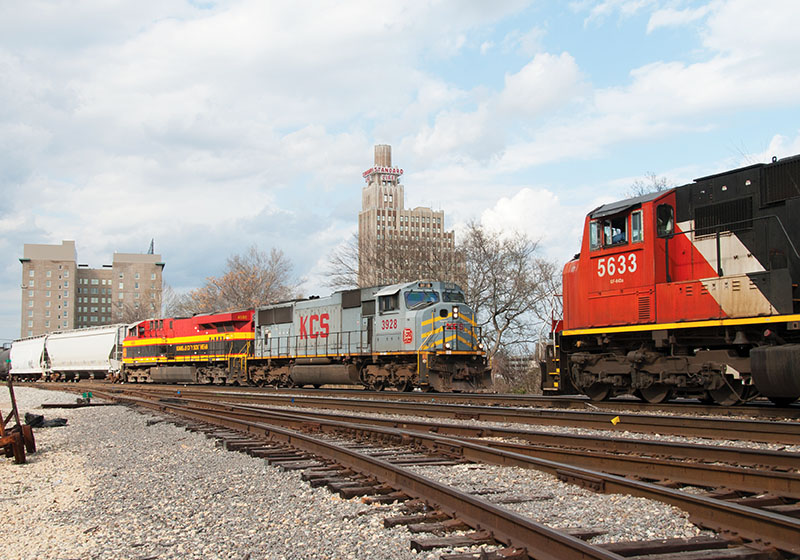 KANSAS CITY — Exactly two months to the day that Canadian Pacific and Kansas City Southern rocked the railroad world by announcing their plans to merge, KCS announced that it had officially rejected CP’s final offer and would instead combine with rival Canadian National.

The decision announced Friday morning appeared to bring to a close a raucous eight-week period where the two Canadian Class Is engaged in a heated war of words over who was the better suitor for KCS to create the first railroad to touch the United States, Canada and Mexico. But the real battle may just be getting underway as CN-KCS take their case to the U.S. Surface Transportation Board, the federal regulator that has the ultimate say in whether or not the deal will happen and an entity that has thus far been chilly at best to the idea of putting the two roads together.

Nonetheless, CN and KCS officials expressed optimism that the deal would be done.

“We are thrilled that KCS has agreed to combine with CN to create the premier railway for the 21st century,” said CN CEO JJ Ruest. “I would like to thank the numerous stakeholders of both companies who have demonstrated overwhelming support for this compelling combination, and we look forward to delivering the many benefits of this pro-competitive transaction to them. I am confident that together with KCS’ experienced and talented team, we will meaningfully connect the continent – enhancing competition, offering more choice for customers, and driving environmental stewardship and shareholder value.”

In a press release, CN and KCS officials said they hoped that the STB would soon approve their plan to put KCS into an independent voting trust, enabling CN to pay shareholders. The voting trust would oversee KCS until the board officially approved the merger. If the STB did not approve it, CN would have to sell KCS. If everything goes according to CN’s plan, it would complete the transaction during the second half of 2022.

In March, CP and KCS announced plans to merge, creating a tri-nation rail network that many industry observers believed was the most logical Class I merger among the big seven and the one most likely to get approved by the STB. The STB even signaled its openness to the consolidation by deciding to apply an older, less stringent set of rules to it. But a month later, CN announced that it wanted a piece of the action as well and would offer $33.6 billion, significantly more than CP’s $29 billion offer.

The offer by CN kicked off a surprisingly nasty war of words between CN and CP officials. CP CEO Keith Creel said CN’s plan was reckless and would destabilize the North American rail network. “They either don’t know how much damage this proposed combination could create or worse yet, they do and they prefer not to share the truth,” he said.

CN’s executives shot back by accusing CP of trying to distract shareholders with “inaccurate and unfounded assertions.”

While CP and CN were going after each other in public — all in an apparent effort to sway the opinion of stakeholders — the STB received a flurry of filings from both railroads, including a pre-emptive merger notification from CN.

In May, CN sweetened its offer to KCS: It would pay an additional $700 million to cover a breakup fee KCS will owe CP for backing out of its merger plans. Later that day, KCS announced that CN’s offer was “superior” and that CP had five days to respond.

Meanwhile, the STB was busy in Washington D.C. On May 17, the board announced that it would apply the more stringent merger rules written in 2001 to a CN-KCS combination. It also rejected an initial request by CN to put KCS into trust during the proceedings, alleging that the application had been “incomplete.” CN has since submitted a revised petition that it hopes will be approved in the coming days. If the STB rejects that petition, it would mean KCS shareholders might not be paid for more than a year. The uncertainty surrounding whether or not KCS could be held by an independent trust spooked one of CN’s biggest shareholders, TCI Fund Management, which in an open letter urged the Class I to drop the bid believing it was “negligent and hugely irresponsible.” CN’s CEO rejected that analysis though, saying he was “committed” to buying KCS.

“Ultimately, what we’re putting together may be a bold move, but a bold move is what is required right now,” Ruest said.

On Thursday, CP CEO Creel made a last-ditch pitch to KCS: It would not budge on the $29 billion offer, but it wanted to remind the KCS board that while CN was offering more money, CP was offering a deal that would surely be approved by federal regulators. In a letter to the board, Creel called a CP-KCS combination “the only viable Class I merger.” The KCS board disagreed.

On Friday morning, despite being rejected, CP officials announced that they would not give up on their proposal and that they were ready to engage with KCS again. They also said they would not be revoking their application before the STB, believing still that a CP-KCS merger is the only Class I combination that will be approved.

Officials close to the railroad said that “CP’s fight for KCS is not over” and that they believed if the STB did not approve the use of a voting trust for the CN-KCS deal the agreement would fall apart.