The lights of a Canadian Pacific westbound train shine into Columbus, Wisconsin, as the first light of December 18, 2011, burns red-orange in the sky. Sometimes a photo like this gets sweeter with time. Photo by Scott Lothes.

At dawn on December 18, 2011, I stood on the Lewis Street overpass in Columbus, Wis., my Canon 5D secured to my tripod and pointed down the two main tracks of Canadian Pacific’s Watertown Subdivision. As the day’s first light burned red-orange into the southeastern horizon, a westward freight train approached. Its headlights illuminated the one-degree curve next to the Vita Plus feed mill and I began firing my shutter, the locomotives passing in a rush of cold wind and hot diesel exhaust.

While the cars rattled beneath my perch on the sidewalk, I reviewed my shots. To my immediate disappointment, the headlights had completely washed out the scene. The day was new and there would be plenty more trains to photograph, so I shook it off and headed for my next spot. I kept the files on my memory card, downloaded them that evening with all the other shots from the day, and soon forgot about those blown-out dawn photographs.

More than a decade later I went back through my files from December 18, 2011, in search of other photographs from that day. I remembered most of the trains and most of the shots, but it took seeing those “ruined” views of the westbound at first light to jog my memory about them. The full range of emotions quickly ran through my mind, from the excitement of a train at such a magical and fleeting time of day, to the disappointment of failing to capitalize on it. The photograph that I had wanted then — showing the clear form of the lead locomotive and the signature three points of light — still does not exist. Those frames remain a mess of flare and blown-out highlights.

But then I looked at the frame just before those, and I saw it as if for the first time. With an overhanging tree branch obscuring the distant train and its bright headlights, the exposure of the entire scene is perfect. The hidden lights cast a warm glow in front of them, drawing my eye to the tracks and filling my mind with anticipation. While it may not have the in-your-face drama of the shot I had originally wanted, it’s an image that speaks far more enduringly to the allure of a train approaching a Midwestern farm town on a winter’s dawn. It just took the perspective of a decade to see it that way. 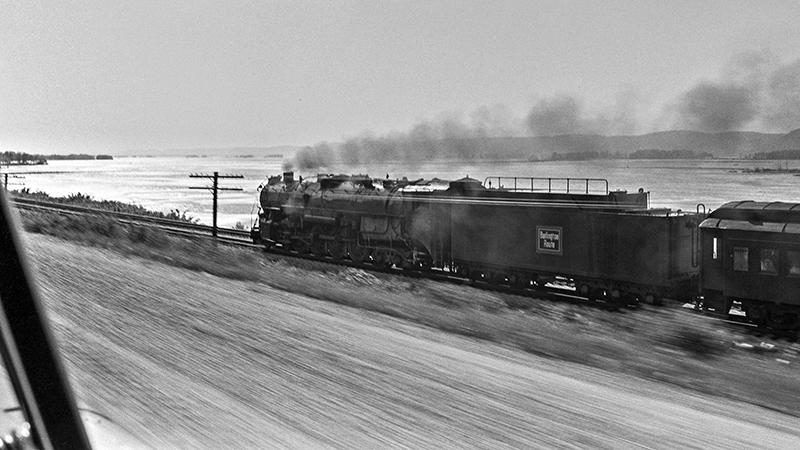 Chicago, Burlington & Quincy 4-8-4 5632 charges down the Mississippi River with an excursion train near Stoddard, Wisconsin, on October 5, 1963. Photo by John E. Gruber, Collection of the Center for Railroad Photography & Art, Gruber-05-45-097

That December morning took place four months after I had moved to Wisconsin to become the full-time executive director of the Center for Railroad Photography & Art. One of my greatest joys in a role filled with them is going through the photographs in our collections and seeing them for the first time — with the perspective of decades since they were taken and without so much of the attachment that photographers bring to their own work. When an image stops me in my figurative tracks and leaves my jaw on the floor — which happens pretty frequently — I sometimes wonder how my reaction compares to the photographer’s own feelings about it. My hope is that I bring a fresh perspective that encourages further appreciation of their work — for the many photographers represented in our archive who have passed on, I can never know how they might view my assessments of their material.

Even though I worked closely with our founder John Gruber for several years, I saw very little of his photography until after he died. Now that his widow, Bonnie, has donated his collection to us and our archivists are processing it, I eagerly anticipate each new batch of digital files. Within them I find mind-blowing images that I have never seen before on a staggeringly frequent basis. One that has seared itself on my retinas is a pacing shot of Burlington 4-8-4 5632 charging down the Mississippi River south of La Crosse, Wis., with an excursion train on a bright October day in 1963. Against the Iowa bluffs in the hazy distance, sunlight sparkles off the wide river as smoke lays back over the engine and the ground rushes past in a celebration of steam at speed.

John may never have printed that photograph — it’s a difficult negative that would challenge the most talented darkroom technician. But now, almost 60 years after that piece of cellulose passed through John’s Nikon F out there on Wisconsin Highway 35, using digital imaging tools not even imagined when an O-class was still in steam, pulling a beautiful print out of that fragile negative is a relatively straightforward exercise in Photoshop.

Buoyed by my experiences with the Center’s archive, as well as the thrill of rediscovering that 2011 dawn shot from Columbus, I decided to review more of my photography from around that time. Before the job and my social calendar became quite as full as they are now, and with a whole new region of railroads to explore, I got out quite a bit during the first 18 months I lived in Wisconsin. While I remembered and had already processed most of my favorite shots, more discoveries nearly as exciting as the one from Columbus awaited me.

One weekend the following spring, my wife and I had camped in Sabula, Iowa, where I still enjoy photographing the railroads on both sides of the Mississippi River and especially Canadian Pacific’s former Milwaukee Road drawbridge between them. In the past 11 years, I’ve shot a number of trains crossing that bridge by both day and night, but I had forgotten all about CP Train 273, the Bensenville to Nahant manifest, on the morning of April 22, 2012. 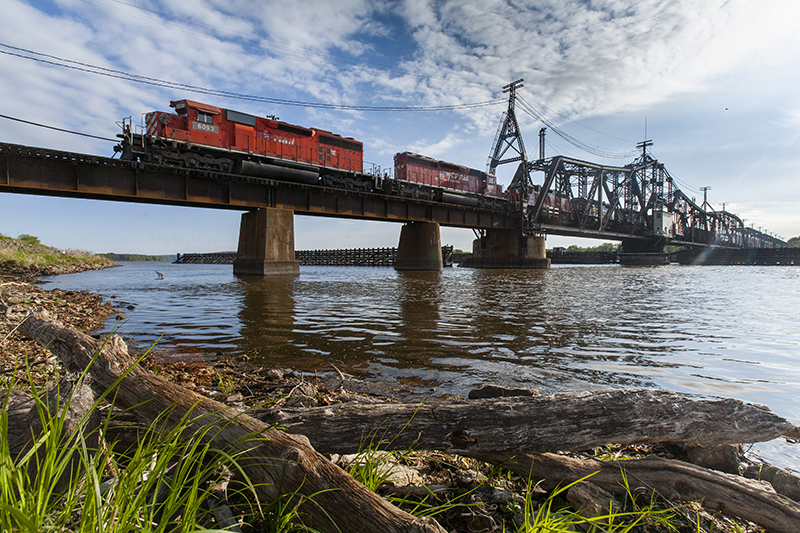 Dakota, Minnesota & Eastern SD40-3 6093 leads Canadian Pacific Train 273 across the Mississippi River at Sabula, Iowa, as an osprey takes flight beneath the locomotive’s nose on the bright spring morning of April 22, 2012. Photo by Scott Lothes.

At the time, locomotives of predecessors Iowa, Chicago & Eastern and Dakota, Minnesota & Eastern were still common. CP had acquired both roads in 2008 but had been slow to integrate their motive power. I favored their blue and yellow engines, so I was disappointed to find DME 6093 leading the train, a boomerang locomotive built in 1966 as an SD40 for CP, which later went to DM&E, and then came back to CP in that 2008 merger. Along the way it had been rebuilt as an SD40-3 but never repainted from CP’s “action red” colors, which were looking a little faded and patched-over in 2012. With only a few trains per day crossing the Sabula bridge, I still took the shot, but filed it away and forgot it after returning home from that trip.

Ten years later, I am delighted to have it. SD40s of any kind and color have all but vanished from CP’s lines in the Upper Midwest, and the red on the flanks of the 6093 hadn’t faded nearly as much as I initially thought. Compared to the now-typical General Electric locomotives with their darker (and usually dirtier) red, the 6093 looks awfully good — especially in the raking side light of a new spring morning, with driftwood and bright green grass in the foreground, a cloud-dappled blue sky overhead, the river’s rippled surface below, and an osprey taking flight from the bank just below the locomotive’s nose. A couple of masks in Photoshop resolved the high-contrast lighting conditions, while liberal use of the healing brush cleared the dust spots left by my filthy image sensor. Dismissed at the time, this shot is now one of my favorites from the many I have taken at Sabula over the years.

My journey back through my files from late 2011 and 2012 yielded many more discoveries. While not all of them were pleasant — I had to relive more than a couple what-the-heck-was-I-thinking moments and heartbreaks from conditions that didn’t quite align — the good discoveries outweighed the bad.

Three main factors elevated my opinion of photographs I had previously overlooked. The first and most obvious is the example of the 6093 — a seemingly mundane subject that became special because the ensuing decade had made it rare or eliminated it altogether. The second is my additional experience in processing digital images — from files that were unworkable for my capabilities at the time, in some cases I could now coax satisfying images. (Surely, any film photographer who does their own darkroom work can relate.) Third and perhaps more mysterious is my own shifting aesthetics. Shots that I somehow had the foresight to take, even though they failed to meet my expectations at the time, can occasionally appear much better upon reexamination.

In every case, the lesson for the moment is clear; if you’re there, take the shot — take several shots — even if the conditions seem less than optimal at the time. Your future self may have different tastes and capabilities than your current self, but your future self still has to rely on your current self to provide it with material. Even looking back on some of the painful failures from my past photography could be helpful. Revisiting some of the what-the-heck-was-I-thinking moments provided good reminders of what not to do.

The most important reminder for me, though, is the simple notion of the value of periodically reviewing your own work. Tastes change, and not just because of the evolution of the rail industry. Looking back on earlier photographs from the perspective of a few years or decades can be frustrating at times, but it can also be rewarding and even thrilling. As we take in more imagery over the course of our lives, we expand and refine our visual catalogs and sensibilities. And sometimes when we look back, we find that those sensibilities had been inside us all along, just waiting to be appreciated by the perspective of a little more time. 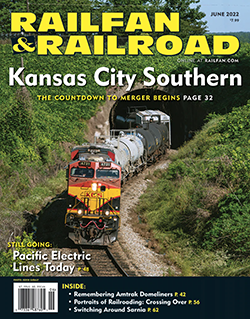 This article appeared in the June 2022 issue of Railfan & Railroad. Subscribe today!