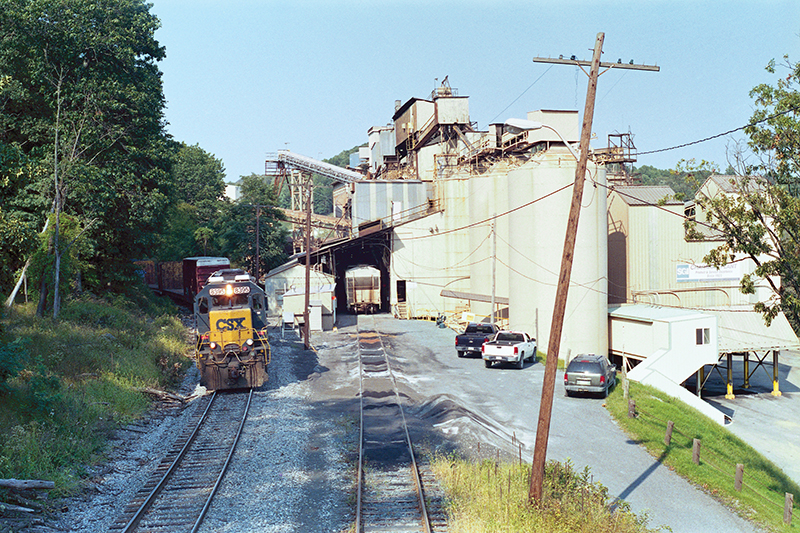 CSX Transportation local D795-12 passes the SGI Grit Mill at Charmain, Pa. on the Hanover Subdivision on September 12, 2021. This image was shot on Fujicolor C200 with a Kodak Retina lllC. While digital cameras may dominate the hobby, photographer David Witty writes that there’s still room for good old-fashioned film. Photo by David Witty.

“Film is not dead, it’s only resting.”

I thought up this phrase years ago as I was discussing the impact that digital photography was having on the film industry at the time. A friend of mine predicted that black & white would be the only film photography left, practiced by photographers who would continue to shoot as artists. Journalism had already switched to the convenience of the DSLR and its ability to produce instant results, easily transferred over the internet to whatever news outlet was available. Kodachrome made its final stand in 2010 and the lab that developed the final roll had a T-shirt made to commemorate the event. Even Kodak’s Plus-X Pan had been discontinued by this time. Was black & white film going away along with most of the color films? It turned out that film was, indeed, merely resting.

I’ve been a film photographer since 1976 when my mother loaded a roll of black & white film into her ancient Kodak Brownie and showed me how to use it. The images, mostly of family and friends, turned out as well as could be expected from an 11-year-old. I still have those square-format negatives tucked away in archival sleeving. Soon, I was gifted my sister’s hand-me-down 126 camera. It had a shutter speed range of … well, it had a shutter speed at least. I gleefully took photos of the model railroad layout belonging to my brother and me, among other things. I also attempted train photography, but that little plastic camera was no match for a speeding Metroliner.

The 126 soon gave way to a new Minolta 110 camera. Although the film size was smaller, the camera was far more advanced and had decent optics for what it was. It was no match for any speeding train, but a Conrail freight crawling up to the tower operator at Bowie, Md., who was about to hoop up train orders to the crew, was no problem at all. The series of photos was better than I had ever hoped for. In fact, that was the very first time that I took a series of photos as the train approached. It wasn’t long after this I became hooked on train photography, but since trains moved at different speeds, I needed a camera that would be able to handle this and more. Enter the Pentax K1000 and my journey into 35mm film photography. 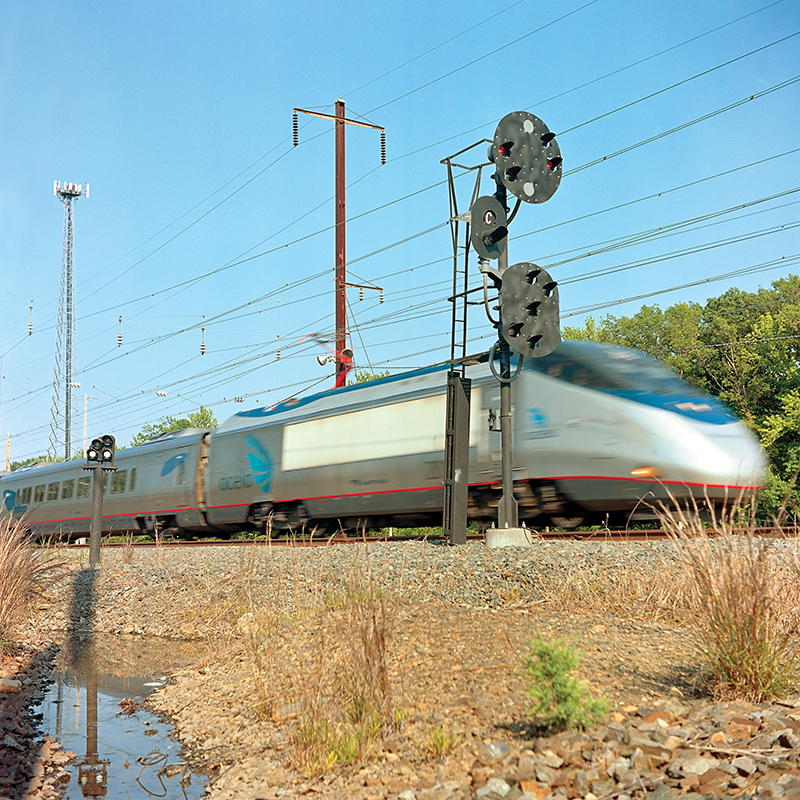 Acela 2163 slows for a speed restriction ahead over the Susquehanna River bridge at Perryville, Maryland on June 5, 2021. The small signal to the left protects the east leg of the wye with the NEC while the larger signal protects the station siding. Shot on Kodak Portra 400 with a Rolleicord lll. Photo by David Witty.

I purchased the K1000 new with a 50mm lens in October 1988. After I’d gotten home with my new camera, I read the manual and learned about shutter speeds and apertures and how to read the light meter in the camera. The next day, I went out with the camera and two rolls of film in my bag ready to shoot. I burned through both rolls of film at the yard in Brunswick, Md. There were Maryland DOT F-units and early CSX-painted locomotives — even a trio of GP30Ms on a westbound train. I got home and promptly sent the film to be processed. When I got the film and prints back I was delighted with what I had photographed. This was truly an eye-opening experience; the sharpness and clarity were impressive over what I’d gotten with the 110 camera. Eventually, lenses were added to my camera bag, along with another camera in 1990 (a Nikon with its own set of lenses) that allowed me to keep one camera loaded with color film and another with black & white film.  The Pentax was eventually replaced by another Nikon that allowed me to lighten my camera bag considerably since each camera body now shared the same lens mount. By the mid-1990s, a medium format camera had been added to the mix. I didn’t take all three with me every time I went trackside, but there were a few times that I did.

By the end of the decade, camera manufacturers were introducing digital cameras, with sales reps stating that film photography was dead and it was time to move into the future. At that time, most if not all the digital offerings were inferior to what one could get from a good Kodachrome slide or a 6x7cm negative; I was not impressed in the least. Throughout the 2000s, though, the DSLR improved and became more advanced while film cameras, with a few exceptions, were being discontinued. Still, I was not convinced.

I continued to shoot film, resisting the DSLR’s siren song to put down that FM2 and grab Nikon’s latest and greatest. By that time, I had a Nikon F100 along with the FM2 and was quite content to continue photographing trains with both.

I finally gave in, though, taking the plunge in October 2013 with the purchase of a Nikon D5200 and a kit lens. I liked it enough and the images I got were absolutely sharp as a tack (in fact, too sharp), but they lacked that “certain something” you get with film. Film is not sharp nor is it perfect in any way, and that is what makes it so endearing — and perfect.

Nevertheless, I enjoyed this new approach to photography and felt reinvigorated as far as rail photography was concerned, even upgrading from the D5200 to a “full-frame” DSLR, the Nikon D610 that to my delight would accept most if not all of my older Nikkor lenses. I took this camera on all my big railfanning trips, happily chimping away in the backseat of the rental when I wasn’t in the driver’s seat. Then one day I decided that a certain photograph I was about to take might be better in black & white, easily accomplished in-camera or with Photoshop. The first thing I noticed while I was working on it, though, was that the image did not look like a black & white photo upon conversion. It was too sharp and sterile-looking. The easy fix seemed to be adding Photoshop’s film grain filter. While I was adjusting the image, I found myself saying, “It’s getting closer to that Tri-X look. I wonder what it would look like if I had just shot with Tri-X?” Kodak still made Tri-X, along with TMAX 100 and 400. That was a moment of clarity for me. 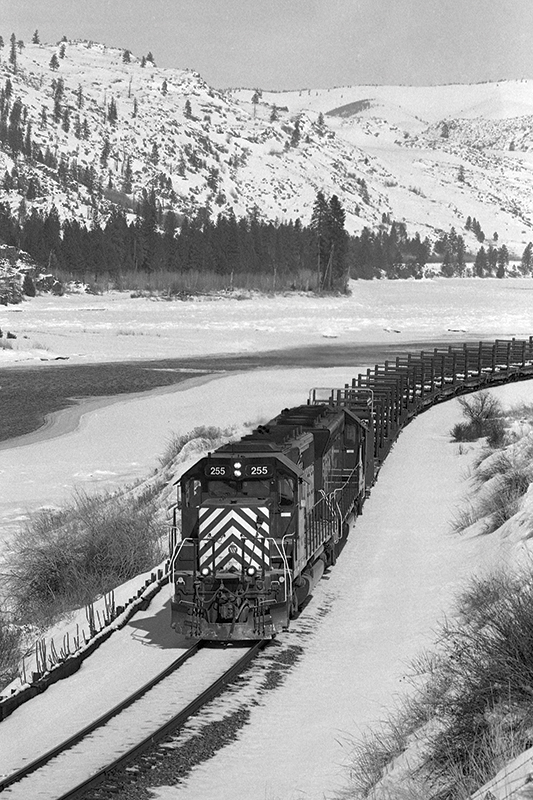 A Montana Rail Link ribbon rail train heads west on the 10th Subdivision following the Flathead River to its confluence with the Clark Fork at Paradise, Mont., on March 11, 2019. Shot on a Nikon F with Kodak TMAX 400 film. Photo by David Witty.

I decided at that point that a film camera loaded with black & white might not be a bad companion to my DSLR, and my camera bag was big enough for two SLRs. After all, I still had all my film cameras, so why not bring one along for the sole purpose of covering the monochrome aspect of my rail buffing? The very next railfan adventure with my friends had me shooting two cameras, sometimes simultaneously. The D610 covered the color and a newly acquired Nikon F from early 1964 covered the black & white. I maintained the same ISO between the two cameras (since the F has no light meter), and was delighted with the results after I processed the film.

Since then I have gone out railfanning without the DSLR at times, using a film camera as the only camera but always with my trusty Sekonic light meter. I’ve had the Sekonic for over 30 years and it has never let me down — and it doesn’t need a battery either.

These days one will find me trackside with either my DSLR, a 35mm SLR, a 35mm rangefinder, or even my 1951 Rolleicord III twin-lens reflex. I’ll shoot any variety of film in these cameras as long as film remains available (and affordable). I’ve been developing my black & white film since the early 1990s and have recently begun developing color negative film. It’s more time-consuming, but it is a true labor of love. There will always be that moment of anticipation when you pull a roll of film from the developing tank and see the images for the first time. It is a rewarding experience once you see what you have created. Once the film is dry, cut, and sleeved, I scan the images, which adds more time to the process — but again, it’s a labor of love. I don’t do anything fancy with my images beyond cropping, removing dust, rotating when necessary, and of course, exposure adjustments. I try to keep it simple and that works for me.

Recently I’ve seen younger folks — 20-somethings — who have “discovered” film photography and have put down their DSLR/mirrorless cameras. This has been an encouraging trend that hopefully will continue. There are still film manufacturers out there, including Kodak which has reintroduced some discontinued film stocks within the last few years. Ektar 100 and TMAX P3200 are two of those films, but the big one was Ektachrome E100 slide film in 35mm, 120, and large format sheet film. Ektachrome’s triumphant return was welcomed by film photographers worldwide. Even Fuji reintroduced their ACROS black & white film after discontinuing it previously.

Perhaps this trend will continue; perhaps this is merely a fad. Manufacturing a film stock is an expensive gamble. If film manufacturers are willing to dip their collective toes back into the analog waters then there must be a market. Time will tell. I am certainly delighted at these prospects. In the meantime, I will be trackside with either film camera, a digital camera, or both — gleefully embracing the blend of analog and digital formats. 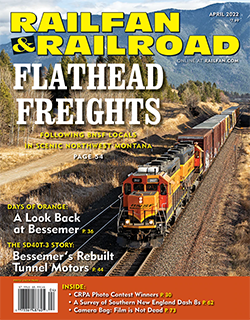 This article appeared in the April 2022 issue of Railfan & Railroad. Subscribe today!