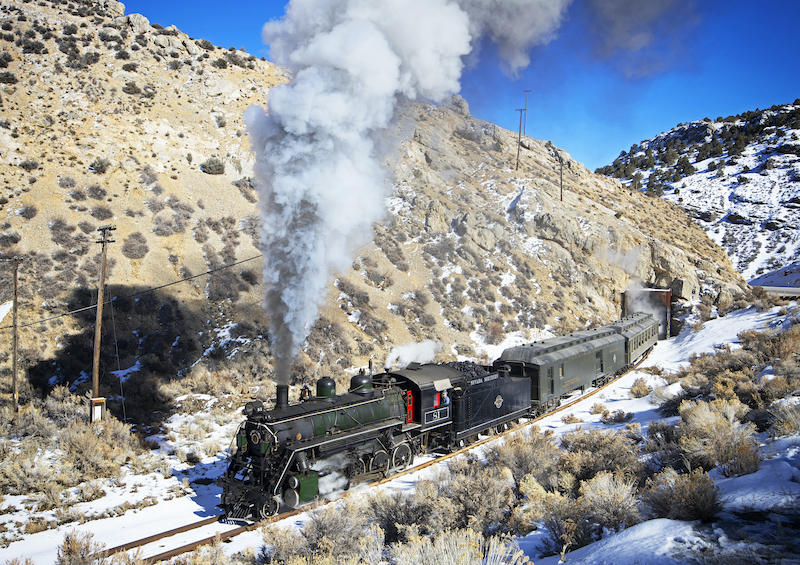 The wedge shot came to prominence in the steam era but it still works today. On February 26, 2022, Nevada Northern Railway 2-8-0 81 storms through Robinson Canyon near Ely, Nev. Photo by Justin Franz

Note: Railfan & Railroad Magazine is joining the Center for Railroad Photography & Art in celebrating March 4 as “National Wedge Day,” a celebration of one of railroad photography’s most iconic types of images. Full Disclosure: Associate Editor Justin Franz is also a board member of the Center.

In my opinion, anyone who disparages the wedge shot just doesn’t appreciate its simple beauty.

The wedge shot has been one of the cornerstones of railroad photography since the 1930s and 1940s, when consumer cameras became widely available and rail enthusiasts began to turn them toward moving trains. While the elements of a wedge are simple — stand adjacent to the tracks with the sun behind your back and shoot the train at a three-quarter side view — nailing that type of photo back in an era of slow film and sluggish cameras was actually an impressive feat. Among the best at this was Donald W. Furler of New Jersey. In the 1930s and 1940s, Furler was a master of the classic three-quarter view, always ensuring that there was a pleasing plume of smoke trailing off into the distance and that the rods were down (I’m not exactly sure who said the rods had to be down in a photo of a steam locomotive, but they’re not wrong). A 50mm “normal lens” was almost always the perfect tool for these shots. 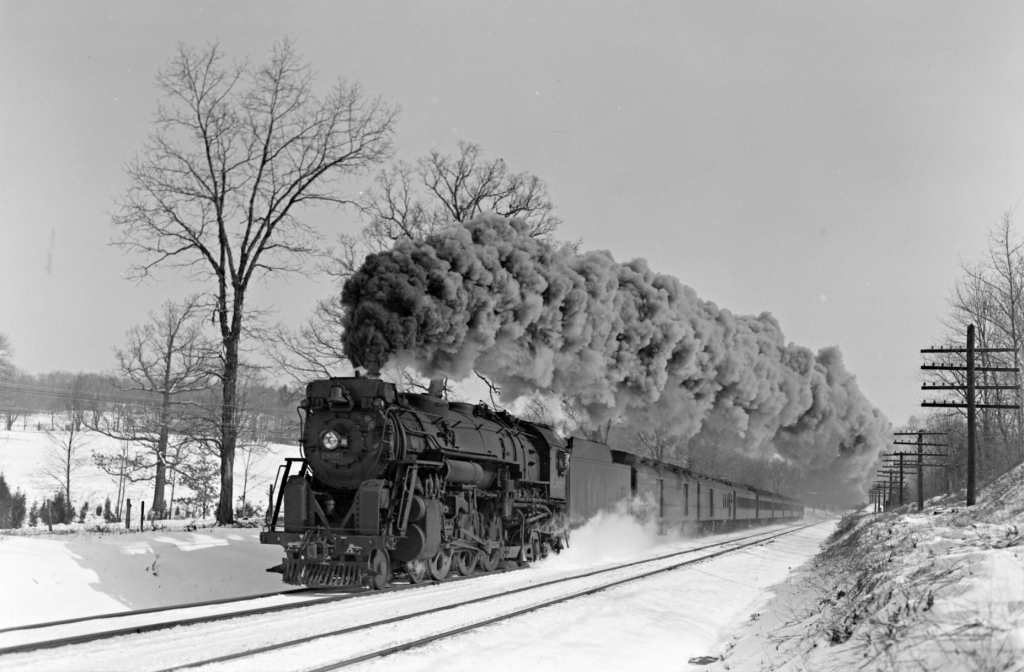 The Erie Limited roars through Oxford, N.Y., in February 1946. In this classic steam-era image by Donald W. Furler, you can see that he used a traditional “normal lens” (probably about 50mm) and picked a spot where he knew the locomotive would produce a trail of smoke, conveying power and speed. And like any good steam-era photo, the rods are down. —Photo by Donald W. Furler, Collection of the Center for Railroad Photography & Art.

Another proponent of the “wedge” was Lucius Beebe, the famous author, photographer, and socialite who is often credited with creating modern railroad book publishing. “The perfect railroad action photograph — with its rural background, its clarity of definition of all moving parts, its indication of speed through smoke and steam exhaust, its full-length view of the entire train, and its absence of any object or matter to distract the attention from the locomotive and consist themselves — is not easy to come by,” he once wrote.

One of the reasons the wedge worked so well in the steam era was that steam locomotives were spectacular to look at. You didn’t need to get fancy with your composition to create a captivating image: simply turn your camera toward a speeding steam locomotive and let it do the rest.

As the steam era came to a close and the considerably less dramatic diesel took over, railroad photographers began to diversify their compositions. Telephoto lenses became a popular tool to bring in geographic elements, like distant mountains or skylines, to help spice up an image. Wide-angle lenses also let people add elements that made for a more pleasing image. 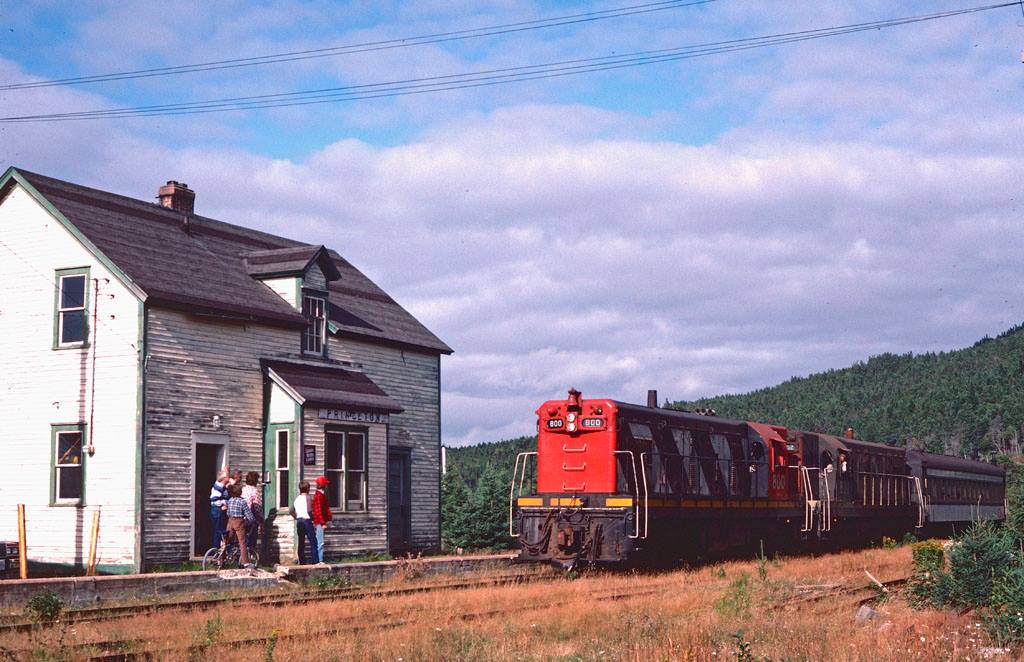 A simple shot that tells you a lot: Canadian National’s Bonavista Mixed arrives in Princeton, Newfoundland, in 1983. The rundown station and the weedy tracks tell you this railroad is on its last legs, but the crowd on the platform tells you this is still a critical link for these island communities. —Photo by Timothy Franz.

But even in the diesel era, I think a well-composed “wedge” can be a striking image. Take one of my favorite railroad photos by my father, Timothy Franz, for example. In 1983, Canadian National was still running its 42-inch gauge railroad on the island of Newfoundland and my dad spent a week there photographing as much of it as he could. Here we see the Bonavista Mixed approaching the station at Princeton. The station has obviously seen better days, but the arrival of the weekly train is still a big event in town, as evidenced by the townspeople gathered on the platform. Grass and weeds are growing up between the main line rails and it’s obvious that it has been a number of years since those sidetracks were used. Although the two locomotives are in the modern CN livery, you can spy an older logo on the station, showing it’s been a long time since any updates were made at this lonely outpost.

The composition of the image isn’t fancy, but it says so much about railroading in Newfoundland in that era: A railroad on its last legs that was still a critical link for remote island communities. 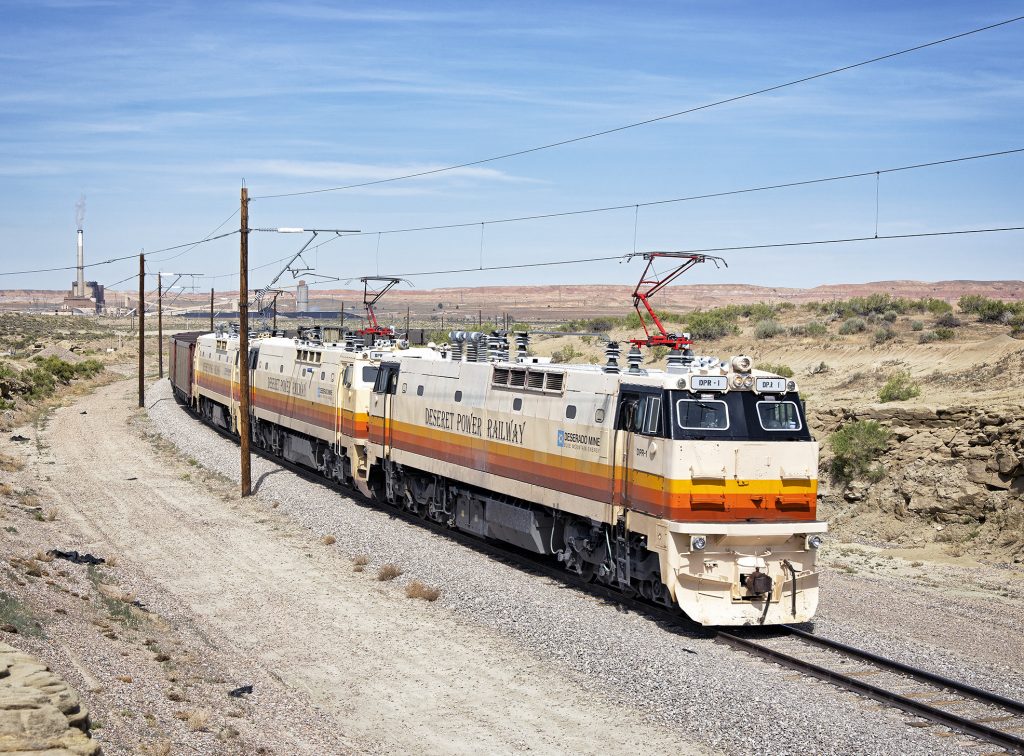 Is this the best photo of the Desert Power Railway? No way. But it tells you a lot about the railroad itself. DPR-1 leads an empty coal train east near the Bonanza, Utah, power plant in June 2020. —Photo by Justin Franz.

Here’s a shot I took back in 2020 of the Deseret Power Railway in eastern Utah. While the composition isn’t groundbreaking, I like to think the image tells you a few things about the railroad itself. For starters, the electric catenary is prominent in the image because its set against the blue sky. In the background, you can see the Bonanza Power Plant and piles of coal that the railroad brings from a mine in western Colorado. And to the right of the locomotives, you can see the muddy, sandy and rugged landscape in which the railroad deals with. This is by no means a spectacular image, but it is an informative one.

As railroad photographers, we often set out to create memorable and captivating images, while also trying to record for history the railroading that surrounds up. Sometimes that means using a telephoto or wide-angle lens to create a unique angle. But other times, that simply means putting a trusty old 50mm on the camera and capturing what is in front of you.