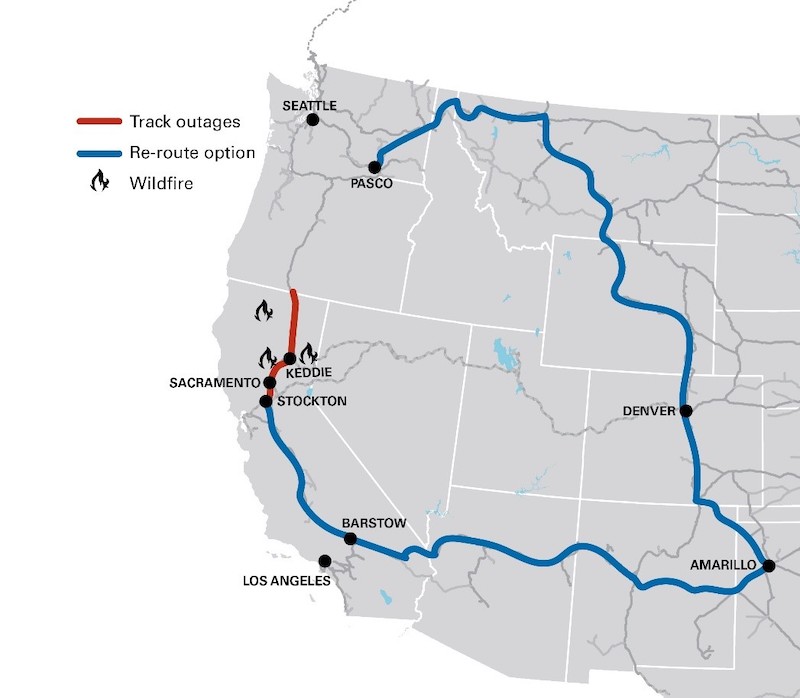 BNSF Railway announced this week that its operations between Stockton and the Oregon state line had been suspended. Map Courtesy of BNSF Railway.

KEDDIE, Calif. — The wildfires that have blanketed much of the nation with smoke this week are continuing to disrupt rail operations in the west.

Earlier this week, BNSF Railway told customers that service had been suspended on its route between Stockton, Calif., and the Oregon state line due to the Dixie Fire, a 100,000-acre monster currently burning in the northern part of the state. BNSF is routing traffic around the fire via a long about detour through Washington, Idaho, Montana, Wyoming, Colorado, New Mexico, Texas, Arizona and California.

“Customers with shipments designated to move to/from Northern California should expect delays until service can be safely restored,” the railroad said. “Operations teams have implemented procedures to re-route Pacific Northwest-Southern California train flows. Some trains are now moving through the central Rockies, including via our Northern and Southern Transcon routes, to reach destinations.”

BNSF and UP crews are teaming up with firefighters to protect rail infrastructure in the Feather River Canyon, including using fire trains.

Fires were already impacting rail operations across the region this month. Union Pacific’s Black Butte Subdivision in California will remain closed until at least mid-September while the railroad repairs a large bridge that was heavily damaged in a wildfire in late June. And in British Columbia, Canadian National and Canadian Pacific operations were impacted by a massive fire that destroyed a small town. That same fire also heavily damaged a CN bridge.