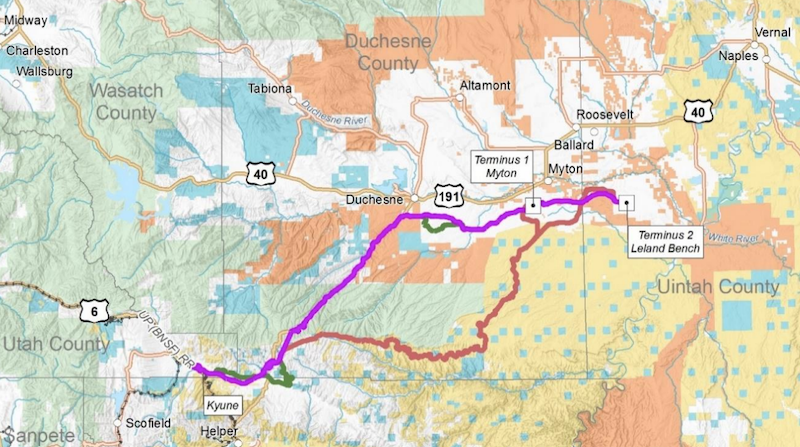 A map showing the various routes considered for the Uinta Basin Railway.

FORT WORTH — Rio Grande Pacific Corporation has selected three different companies to engineer and construct the 85-mile Uinta Basin Railway that will reach deep into the oil-rich desert of eastern Utah.

Rio Grande Pacific received approval from the U.S. Surface Transportation Board to build the new railroad — the first major railroad to be built in the U.S. in more than three decades — back in December. AECOM will design the railroad itself; Skanska-WW Clyde Joint Venture will build it; and Obayashi Corporation will design and build the numerous tunnels that will be required on the route.

“We are pleased to award engineering and construction of the Uinta Basin Railway project to AECOM, Skanska-Clyde, and Obayashi,” said RGPC Chairman and Chief Executive Officer Richard Bertel. “Numerous qualified and technically proficient engineering and construction firms, including most of the major firms in the U.S., pursued the Uinta Basin Railway project to provide us with high-quality and creative responses. AECOM, Skanska-Clyde, and Obayashi provided the best fit to our project objectives of the firms we interviewed.”

​​The Uinta Basin Railway will connect Utah’s oil-rich Uinta Basin with the national rail network at Kyune, Utah, on Union Pacific’s Provo Subdivision (the former Denver & Rio Grande Western over Soldier Summit). The STB approved what has been dubbed the Whitmore Park Alternative, which will stretch 85 miles into the desert of eastern Utah. The effort is being spearheaded by Utah’s Seven County Infrastructure Coalition, Drexel Hamilton Infrastructure Partners and Rio Grande Pacific.

The last major railroad construction project in the United States occurred in the early 1980s, when the Chicago & North Western built into Wyoming’s Powder River Basin.

Utah’s Seven County Infrastructure Coalition provided funding for the environmental impact statement, which will be repaid by the private partner, Uinta Basin Railway. Uinta Basin Railway is owned by DHIP Group, Rio Grande Pacific Corp., and the Ute Indian Tribe of the Uintah and Ouray Reservation. DHIP’s role is to finance the project. Rio Grande Pacific will construct, operate, and maintain the railway. The Ute Indian Tribe is an equity partner in the railway as well as the owner of approximately one-third of the commercial oil resource in the Uinta Basin.

Construction could commence as early as 2023, depending upon financing, right-of-way acquisition, and the availability of contractors. It is expected to take two years to construct.