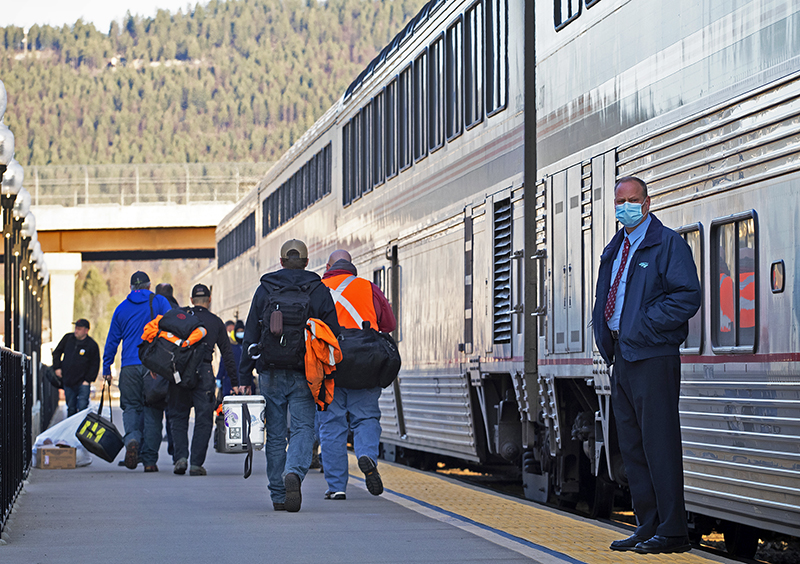 A masked Amtrak conductor stands on the platform at Whitefish, Mont. in April. Photo by Justin Franz.

Amtrak President and CEO William J. Flynn said the railroad needs an additional $1.475 billion for Fiscal Year 2021 — in addition to the more than $2 billion it requested from Congress earlier this year — in order to avoid drastic service and workforce cuts. Flynn made the request in a letter to Congress on May 25.

“As the severity and duration of this pandemic and its economic fallout become clearer, we are seeking supplemental federal funding for the next fiscal year,” Flynn said. “It is clear that Amtrak faces daunting challenges in Fiscal Year 2021, which will require us to take action to protect our rail network, our critical capital assets, and the livelihoods of our employees.”

Early on during the coronavirus pandemic, Flynn had said the passenger railroad had the “foundation” to recover because of efforts by his predecessor, Richard Anderson. In 2019, the company reported $3.3 billion in operating revenues for the fiscal year, a 3.6 percent increase over the previous year, and $29.8 million in losses, an 83 percent improvement over Fiscal Year 2018. The railroad also cut its operating losses by $400 million the previous year. Flynn took over for Anderson in April.

Amtrak officials are now painting a more pessimistic picture of the future as the scope and impact of the pandemic become more clear. To help cope with that less-than-optimistic outlook, Amtrak is trying to reduce operating costs by $500 million in Fiscal Year 2021; $150 million coming from reducing train frequencies and capacity and $350 million from “adjustments to our workforce.” Even with the supplemental funding it has requested, Amtrak officials said it is likely that some services will operate on a reduced schedule in the coming year. Without those funds, though, “several services would likely be shut down entirely.” In an appendix to the letter, all of Amtrak’s long-distance trains except the Auto Train were listed as “at risk” without the additional $1.4 billion from Congress.

Amtrak is not alone in its financial struggles. Earlier this month, a coalition of transit officials from across the country said that they needed at least $33 billion to survive the pandemic, on top of what it already received in the CARES Act. Amtrak also received emergency funding as part of that legislation.