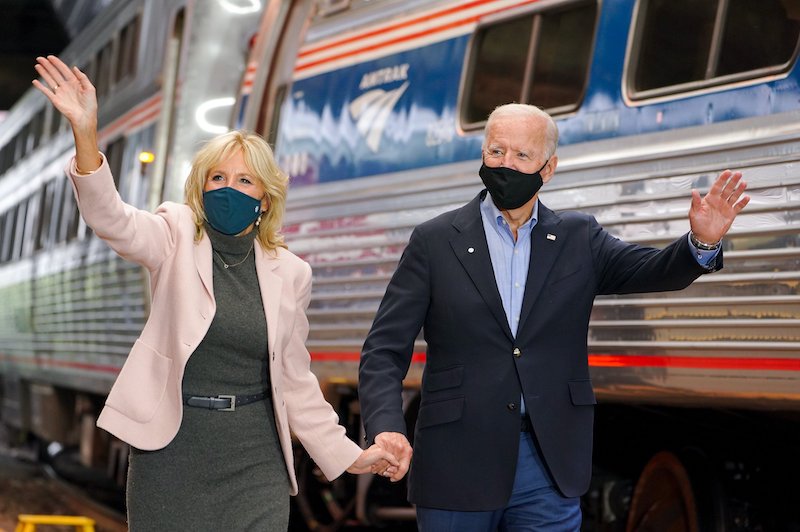 President-elect Joe Biden with his wife Jill Biden walks alongside his campaign train in October. Photo Courtesy of Biden Campaign.

WASHINGTON — Joe Biden rode the train so many times during his decades-long career in Washington D.C. that he earned the nickname “Amtrak Joe.” But will the next president come to the rescue of the passenger railroad facing the biggest crisis ever in its 50-year history? Amtrak officials are hoping so.

On Saturday, just hours after Biden earned enough electoral college votes to rob President Donald Trump of a second term, Amtrak issued a statement congratulating the president-elect and urging him to lend the railroad a lifeline.

“Amtrak looks forward to working with President-elect Biden and Congress,” wrote President and CEO Bill Flynn. “To get the economy moving and help Amtrak and our employees through this unprecedented situation, Congress must act now on pandemic relief and economic stimulus funding which enables Amtrak to recall furloughed employees, restore service frequency on long-distance and state-supported routes, and make investments that will advance critical capital projects such as bridges and tunnels on the Northeast Corridor and new equipment, infrastructure improvements and major station upgrades throughout our network.”

Flynn continued in his statement noting that expanded Amtrak service across the country would be better for the environment and could help reduce the United States’ annual carbon emissions by 28 percent.

“As we enter our 50th year of service, we stand ready to play an important role in helping our nation recover and grow for the future,” Flynn closed.

Chair of the House Committee on Transportation and Infrastructure Peter DeFazio (D-OR) also released a statement over the weekend noting that passenger rail would be a big part of any Democratic legislative agenda. Just how quickly a Democratic administration would work on infrastructure is unknown. Although on Sunday, Biden’s transition team noted that addressing climate change and helping the economy recover from the pandemic will both be top priorities when he is sworn in on January 1, 2021. It’s likely that transportation would be part of addressing both of those challenges.

“‘Amtrak Joe’ and I share the goals of a robust national rail network and turning the transportation sector—the number one contributor to carbon pollution in the U.S.—into one that is clean, efficient, reliable and resilient to extreme weather events,” DeFazio said on Sunday.

Passenger rail advocates are certainly hoping that Biden lives up to his nickname. When he was in the U.S. Senate he made more than 8,000 round trips on the Northeast Corridor between his home in Delaware and Washington D.C. In 1987, he launched his first bid for the White House from the back of a passenger train and in October his campaign organized the first presidential campaign train in more than a decade in Ohip and Pennsylvannia.