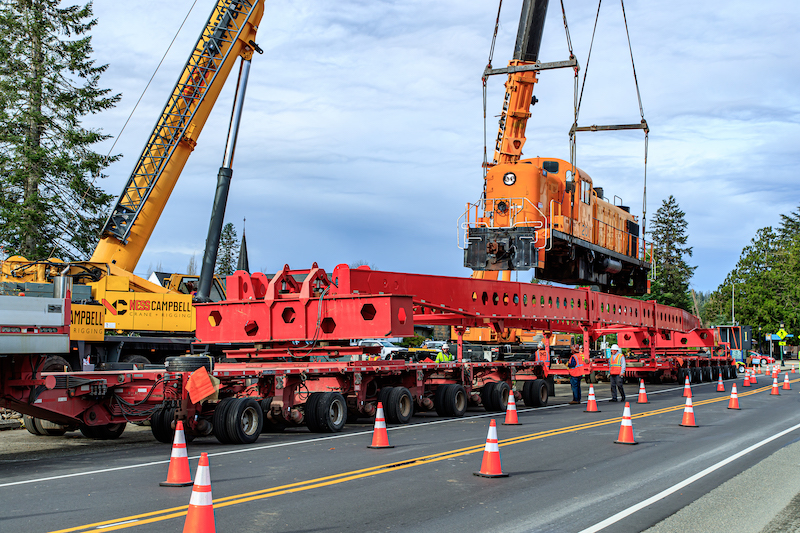 This week, two Alcos took the sky (with the help of cranes) as part of trade between the Northwest Railway Museum and Nevada Northern. Here NNRy RSD-4 201 is hoisted by two cranes to start its journey south. Photo by David Honan.

SNOQUALMIE, Wash. — Two Alco locomotives were on the move this week as part of a deal between two railroad museums, the Northwest Railway Museum in Washington and the Nevada Northern Railway in Nevada.

The locomotive swap saw a Northern Pacific HH600 coming home to the NRM in Snoqualmie and an NNRy RSD-4 hitting the road bound for Nevada, where it was used in freight service until the 1980s.

Earlier this fall, NNRy began raising money to move two diesels, RSD-4 201 and SD7 401, to East Ely, Nev. The RSD-4 has been in Snoqualmie for decades, where it was used in excursion service, while the SD7 is at a power plant in Utah. The museum set a goal of raising $352,000 before October 31 to move both locomotives and quickly met that mark within a few weeks. With the money raised, the two museums got to work preparing the RSD-4 for the trip south. But before NNRy 201 could be moved, the Nevada museum decided to help out NRM with a move of its own. Since the early 2000s, NRM has owned ex-NP 125/Walla Walla Valley Railway 770 located at the Port of Longview, however, it had been unable to move it until now.

With the help of NNRy, the HH600 was moved from Longview to Snoqualmie earlier this week. Once that Alco was unloaded, using a pair of cranes, RSD-4 201 was loaded up for the 850-mile trip south. The locomotive was expected to depart Snoqualmie on November 6. The trip is expected to take three weeks and will mostly occur at night to not disrupt traffic. NessCampbell Crane & Rigging executed the lift, and Intermountain Rigging & HeavyHaul performed the road haul. 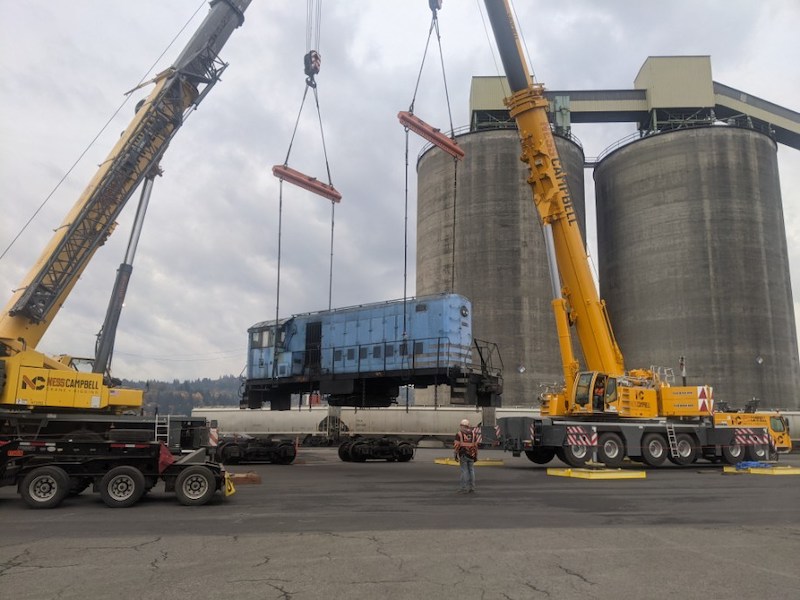 Ex-Northern Pacific 125 is hoisted onto a truck in Longview, Wash., earlier this week. Photo Courtesy of Northwest Railway Museum.