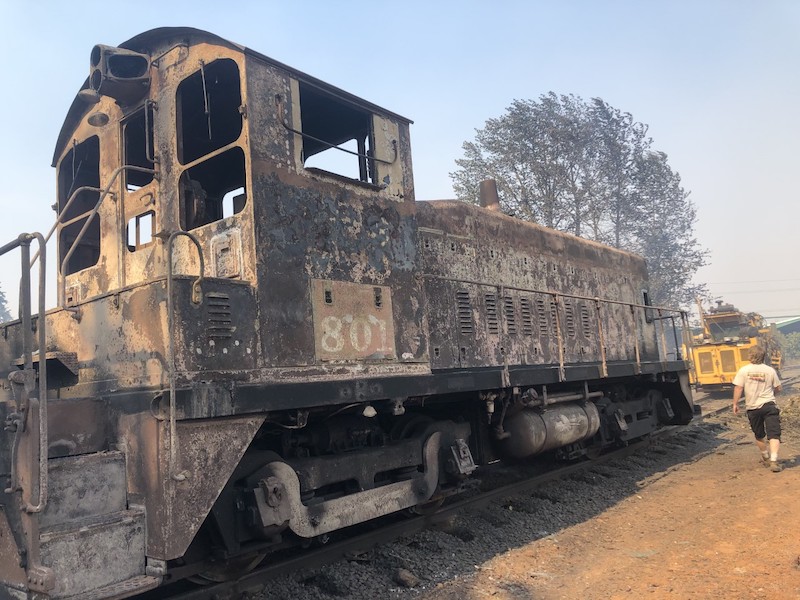 A destroyed SW-8 switcher in Oregon. Photo Courtesy of the Oregon Pacific Railroad.

PORTLAND — Wind, drought conditions and more than a dozen large wildfires in Washington and Oregon combined into a dangerous cocktail on Monday, destroying homes, businesses and impacting a number of the region’s railroads. Fires were still burning on Tuesday and people were still trying to assess damage resulting from the firestorm, although reports of lost locomotives and bridges filtered in throughout the day.

The Oregon Pacific Railroad, which operates on a pair of branches in the Portland area, reported that it had lost an SW8 switcher at a lumber mill in Liberal, Ore. The mill, a major shipper on the former Southern Pacific Molalla Branch, appears to have escaped unscathed.

Fires were burning across central and eastern Washington impacting a number of communities and short line railroads. On Tuesday, there were reports that the Columbia Basin Railroad had lost a bridge and a historic Spokane & Inland Empire Railway covered bridge was destroyed near Colfax. In many areas it was still too dangerous to access the damage meaning it could be days before the full scope of damage is known.

BNSF Railway’s main line to Portland was reportedly closed after a fire started along the Fallbridge Subdivision near Paterson. That fire forced Amtrak to turn the Portland section of the Empire Builder.

As of Tuesday morning, more than 400,000 acres had burned in Washington alone.