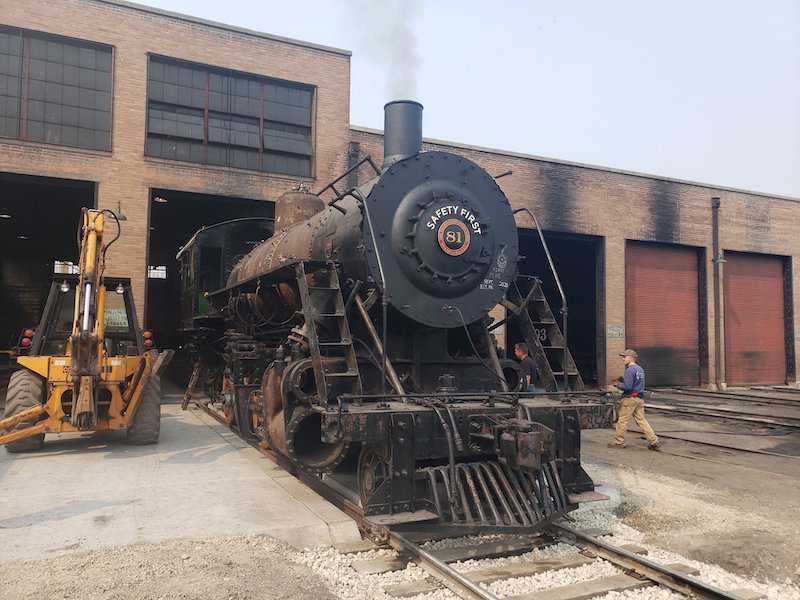 EAST ELY, Nev. — The Nevada Northern Railway fired up a 2-8-0 locomotive for the first time in 62 years on Monday, a major leap forward for the multi-year restoration of the century-old locomotive.

The NNRy rosters two other operating steam locomotives — 4-6-0 40 and 2-8-0 93 — and uses both on excursions throughout the year. However, locomotive 40 is expected to go in for a rebuild next year leaving the tourist operation with just one operating steam engine. In order to have two in the stable at all times, the NNRy began an extensive restoration of 2-8-0 81. The locomotive was built by the Baldwin Locomotive Works in 1917 and is a little bit smaller than 93 but a little bigger than 40. Executive Director Mark Basset calls it a “Goldilocks” locomotive because it’s just right for the operation.

After being retired in the 1950s, the locomotive was put on display in Ely before being moved back to the rail yard in the 1990s. It has sat in the backshop for a number of years waiting for its turn to run. Over the last few years, NNRy contractors, employees and volunteers have completely stripped down the locomotive and began an extensive rebuild. On Monday, with assistance from Wasatch Railroad Contractors, the locomotive was test fired and passed a hydro test. If everything goes according to plan, the railroad hopes to have 81 in operation in 2021.

For more information and to donate to the effort, visit the Nevada Northern Railway website.