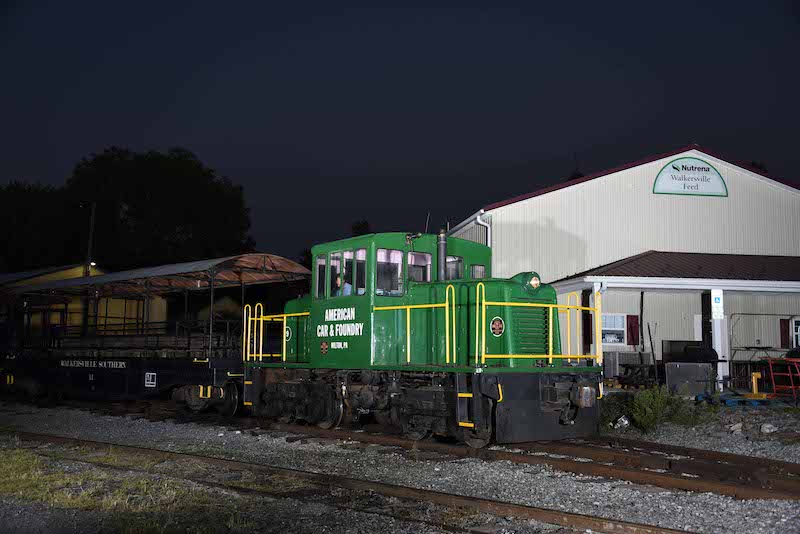 WALKERSVILLE, Md. – The Walkersville Southern tourist pike in central Maryland has acquired a new “critter” for its fleet – a GE 45-tonner that from a defunct railcar facility in Pennsylvania.

Locomotive 9 came from the former American Car & Foundry (ACF) plant in Milton, Pa. and was sold at auction in July along with two sisters – 7 and 8. The plant mostly built and repaired tank cars and closed in late 2019, ending more than a century of business.

Locomotive 7 was acquired by Curry Rail Services in Hollidaysburg, Pa. while 8 went to a planned tourist line between Lowville and Carthage, NY.

Locomotive 9 was built for the US Navy in 1943 before migrating to a steel mill in Camden, N.J. and was recently overhauled and painted, according to the railroad. It was pressed into service shortly after delivery on tourist trains between Walkersville and Frederick. Walkersville Southern runs on a former Pennsy branch that was washed out during Hurricane Agnes in 1972. Following years of work, the line was repaired, including the bridge over the Monocacy River, and excursions started in 1995.

The switcher is in good company at Walkersville and joins several other small locomotives, including another siderod 45-tonner, two former Pennsylvania Railroad GE 44-tonners, and a rare EMD Model 40 (one of only 11 built) dating from 1942. The railroad also has locomotives from Davenport and Plymouth. Some of the locomotives are privately owned.

Another unique locomotive – acquired last year – is Plymouth 60-tonner model CR-4 number 7 acquired from Western Maryland Scenic and painted in the WM “Fireball” livery. Built in 1960 for Jones & Laughlin, it also spent time at Mount Union Connecting RR in Pennsylvania, a start-up more than a decade ago that was planned to work the dual gauge yard where the narrow-gauge East Broad Top connected with the Pennsylvania Railroad mainline. It sees service on the railroad’s dinner trains.

In September and October, the railroad has departures at 11 a.m. and 2 p.m. on Saturdays and Sundays. It also operates popular dinner trains and other special events (see wsrr.org for schedules).