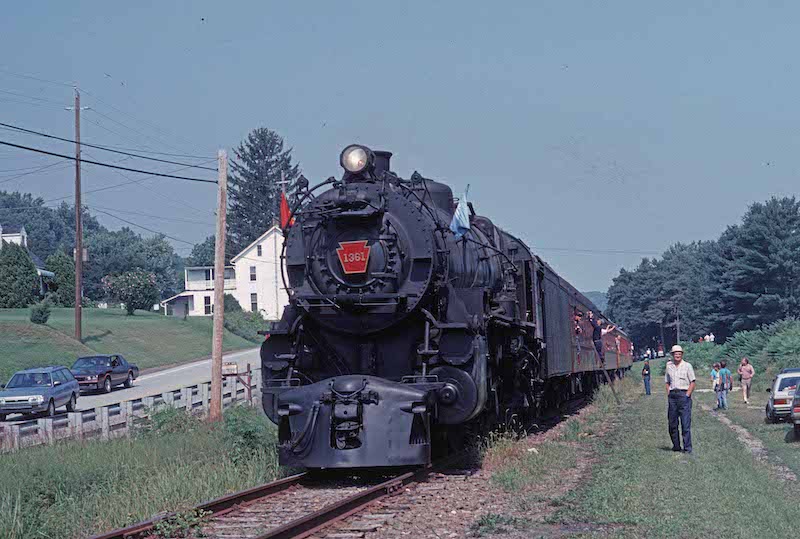 The October 14 event to benefit K4 1361 will also include night photo opportunities, live music and a raffle for a chance to ride in the cab of C&O 1309. Photo by Phil Snyder. Collection of Wilmington NRHS.

CUMBERLAND, Md. — Steam fans will get a chance to help restore the famed Pennsylvania Railroad K4 PRR 1361 by taking a ride on first class equipment behind the mammoth Chesapeake & Ohio 1309 on October 14. The special train will operate between Cumberland and Frostburg, Md., on the Western Maryland Scenic Railway in the first major event following the establishment of a partnership between WMSR and the Altoona Railroaders Museum, owner of 1361.

The event will also include two nighttime photo opportunities, live music and a raffle for a chance to ride in the cab of C&O 1309.

The Pennsy K4 gained fame first as a static display on Horseshoe Curve, then during a brief period of operation in 1987-88. The current restoration effort began a few years ago with the backing of a group that includes names seen as highly credible in the preservation field, such as former Norfolk Southern President Wick Moorman and Juniata Terminal operator Bennett Levin.

The massive C&O 1309 is a 2-6-6-2 built in 1949. It is the last steam engine Baldwin built for a Class I railroad. It was displayed at the B&O Roundhouse Museum in Baltimore from 1972 until its sale to WMSR in 2014. Its restoration to operation was completed on the last day of 2020 and it re-entered train service on WMSR in December 2021.

“Our recent success in completing our own locomotive restoration has set us up to help other like-minded organizations and we couldn’t be happier than to welcome supporters of 1361 aboard,” WMSR Executive Director Wes Heinz said.,

“The railroad is a great venue for tourist railroading, and this fundraiser train will help contribute to the museum and the 1361’s overhaul,” said Joseph DeFrancesco, Executive Director for the Railroaders Memorial Museum, citing its record of attracting visitors from around the nation and the world.

Tickets are expected to sell out quickly and are on sale now at wmsr.com.