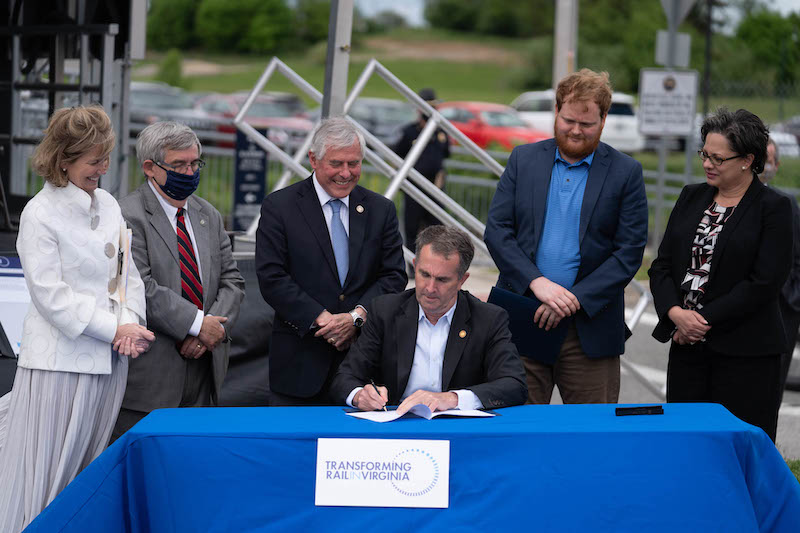 CHRISTIANSBURG, Va. — The Commonwealth of Virginia has inked a deal with Norfolk Southern to acquire 28.5 miles of track from Salem Crossovers west of Roanoke to Christiansburg, which will allow it to expand passenger rail service into the New River Valley for the first time since 1979.

The announcement comes less than two months after Virginia sealed a similar deal with CSX to buy trackage and improve passenger service in another part of the state.

Virginia’s Western Rail Initiative is expected to cost $257.2 million: $38.2 million to acquire the right-of-way and track from NS and $219 million for infrastructure improvements, including improvements at the Roanoke Yard; a 7-mile siding from Nokesville to Calverton; and signal, track and platform improvements from Salem to Christiansburg.

“Bringing passenger rail service back to the New River Valley will fuel tourism, drive economic growth, and create new opportunities for the region’s 180,000 residents and 40,000 college students,” said Governor Ralph Northam. “A key part of our Transforming Rail in Virginia program, the Western Rail Initiative will support critical infrastructure improvements necessary to modernize our transportation system and connect communities across the Commonwealth.

The agreement includes both an increase of existing service and expansion of service to the New River Valley. In 2022, an additional round-trip train to Roanoke will depart Washington, D.C. in the morning and serve Alexandria, Burke, Manassas, Culpeper, Charlottesville, Lynchburg, and Roanoke. Service to Christiansburg will begin in 2025.

“Today is a good day and we look forward to working with all stakeholders to put today’s announcement into action,” said James A. Squires, Chairman, President, and CEO of Norfolk Southern. “Virginia and Norfolk Southern worked cooperatively to reach the Commonwealth’s goal of expanding passenger rail service in the New River Valley, while also preserving the vital role these lines play in delivering goods and materials that drive the regional economy.”