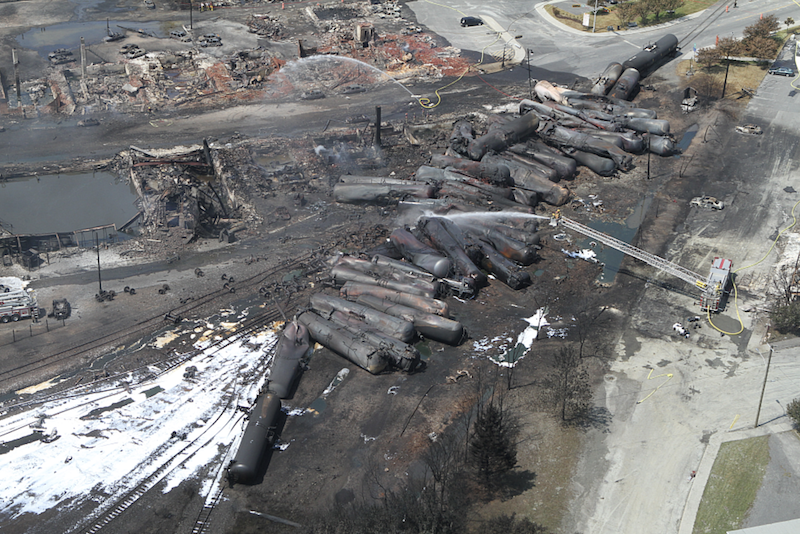 LAC-MÉGANTIC, Que. — On the eighth anniversary of a tragic oil train derailment in eastern Quebec, Canadian Prime Minister Justin Trudeau promised that such a disaster would never happen again. On July 6, 2013, 47 people were killed in the middle of the night when a runaway Montreal, Maine & Atlantic oil train derailed and exploded in the middle of downtown Lac-Mégantic.

The disaster shook both the community and the rail industry, which has dramatically stepped up its efforts to ensure the safe movement of crude oil in the years since.

“On this solemn anniversary, we honor the memory of the victims of this railway disaster – the deadliest in our country’s modern history. My thoughts, and the thoughts of all Canadians, are with the residents of Lac-Mégantic as we remember this event that shook the entire country,” Trudeau said. “Today, the entire country remembers and is inspired by the strength, courage, and resilience of Lac-Mégantic and its residents. Our thoughts are with you. On behalf of the Government of Canada, I encourage all Canadians to pay tribute to those who lost their lives or who suffered in this tragedy.”

Trudeau also reiterated the government’s promise to construct a rail bypass around the community. In May, Canadian Pacific and the government announced that work on the bypass would begin next year and it would be completed in 2023. The 8-mile bypass will take trains north around the downtown area. The government is now securing the property needed to build the tracks.

The derailment of MM&A Train 2 led to the bankruptcy and sale of the struggling regional railroad. In 2014, Fortress Investment Group acquired the railroad at auction and established the Central Maine & Quebec. After major investments in track and safety, CM&Q was sold in 2019 to Canadian Pacific for $130 million.