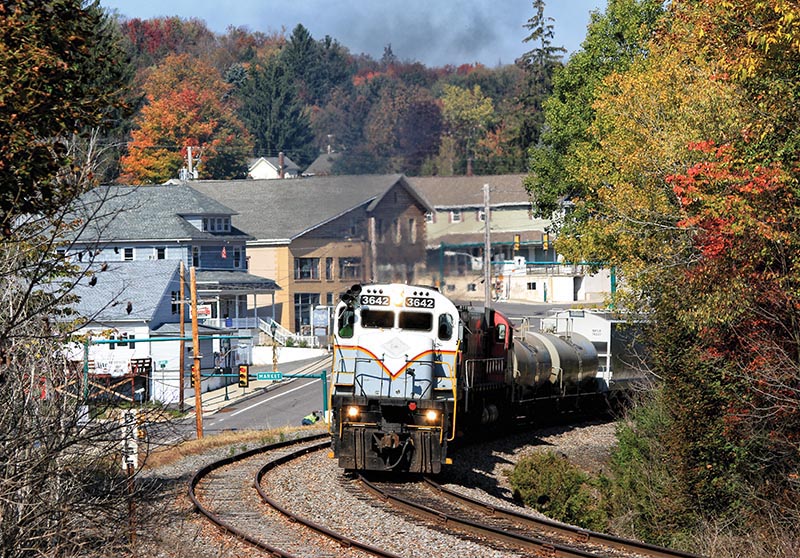 A trio of Alcos — led by Delaware-Lackawanna C636 3642 — charges out of Moscow, Pa., on October 8, 2015, leading Train PT-98. In the 52 years since the American Locomotive Company closed its Schenectady plant, the number of Alco diesels running in the U.S. has dwindled, but that has done little to chill our shared fascination. —Justin Franz photo

The last American Locomotive Company locomotive rolled off the assembly line in Schenectady, N.Y., in January 1969, about 19 years before I was born. Yet, like many railfans, I’m fascinated by Alcos. There’s perhaps no better example of that fandom than the fact that Railfan & Railroad has been producing an Alco tribute issue every October for the last six years.

I’ve now been around for two Alco issues and both times the staff has wondered aloud if there was enough content or interest to put together yet another tribute to this long-lost builder. But every time, our contributors pull through with a collection of stories that shows how, 52 years later, Alcos are still as popular as ever, even with a generation who didn’t know them when they were new.

I was fortunate enough to have grown up in New England in the 1990s when there were still a fair number of Alcos plying the rails, a decade after author Scott Hartley had declared the glory days all but done in his seminal 1984 book New England Alcos in Twilight. On the former Maine Central, Guilford had a small fleet of ex-Delaware & Hudson C-424s working until 1995 and the state-owned Rockland Branch was home to Maine Coast, a short line with a small collection of Alcos. In the mid-1990s, ex-Canadian Pacific and Canadian National Alcos (built by subsidiary Montreal Locomotive Works) entered the secondhand locomotive market, and were popular with short lines looking to quickly build a fleet. Among them was St. Lawrence & Atlantic, which picked up some ex-CN M-420s for its operation in Maine, New Hampshire, Vermont, and Quebec. Farther north and east, in Quebec and New Brunswick, there were even more Alcos and MLWs to be seen. For Dad and me, the biggest prize of them all was Quebec Cartier Mining Railroad, which until 2002 had the last big fleet of six-axle MLWs and Alcos on the continent. Looking back at those years, perhaps Hartley called the time of death a little too early.

As we enter the 2020s, the number of Alcos running in North America has certainly declined in recent decades. But for those who love the burble and chug of these relics, there are still hot spots to visit. Starting on page 60, Nick Benson takes us to one of them in the Twin Cities, where Minnesota Commercial still runs a handful of Alcos and MLWs, including a rare pair of RS-27s. As I write this in late August, I’m looking forward to a long weekend there in a few weeks when I’m hoping to see a few of these survivors myself.

Beyond the Twin Cities, there are still strongholds on Delaware-Lackawanna in Pennsylvania; Livonia, Avon & Lakeville in New York; and even down south on Arkansas & Missouri. Countless other short lines and museums still employ Alcos and MLWs, ensuring that we will be able to continue this tradition for years to come. We hope you enjoy this issue, and let us know if you’d like us to continue this annual tribute to Alco diesels.

This article appeared in the October 2021 issue of Railfan & Railroad. Subscribe Today!