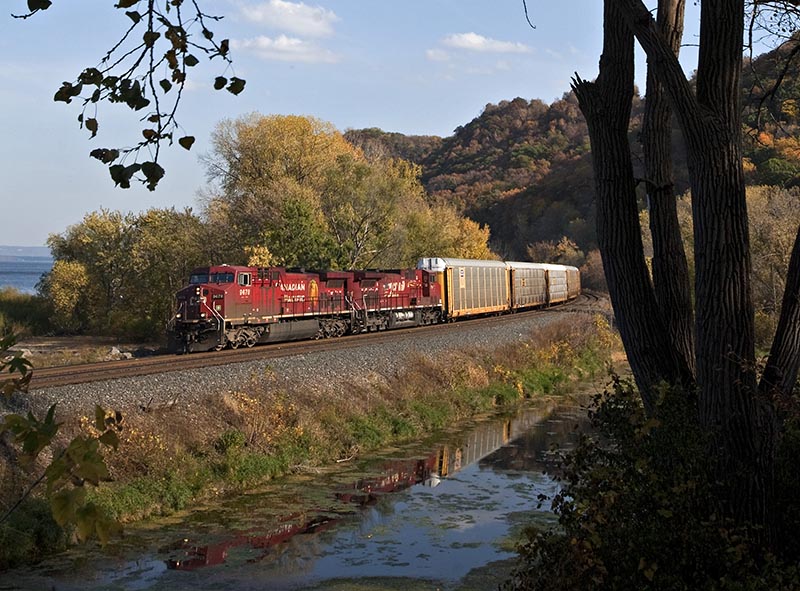 Autumn trees frame Canadian Pacific Train 199 as it heads up the river at Maple Springs, Minn., on October 9, 2011. The hottest train west on the railroad, 199 carries automotive and intermodal traffic from Chicago to Vancouver, B.C. For the past decade and more, it has run up the river every afternoon or evening.

By Scott Lothes/photos by the author

It was 10 years ago, in August 2011, that I first stopped to watch a train in the Upper Mississippi Valley. My wife, Maureen, and I were on the last day of a cross-country drive from Oregon, where we’d spent the previous three-and-a-half years, to Madison, Wis., where I had just taken the job as the executive director of the Center for Railroad Photography & Art. We’d spent our last night on the road with one of Maureen’s graduate school friends who was then living in St. Cloud, Minn.

Rather than taking I-94 the rest of the way into Madison, we rolled down U.S. Highway 61 along the western bank of the Mississippi. The road parallels Canadian Pacific’s former Milwaukee Road main line, and at Minneiska, Minn., we came upon an eastbound mixed freight train stopped in the siding. It was a beautiful summer day with puffy white clouds drifting across a deep blue sky, the sunlight growing warmer as the afternoon shadows lengthened. Expecting that the eastward train was waiting for an imminent westbound, we followed a side road up the bluff to wait. It wasn’t long before that train appeared — CP 199 with two red, wide-nose General Electric diesels leading a few autoracks and well more than a mile of double-stacked shipping containers from Chicago to Canada’s West Coast. 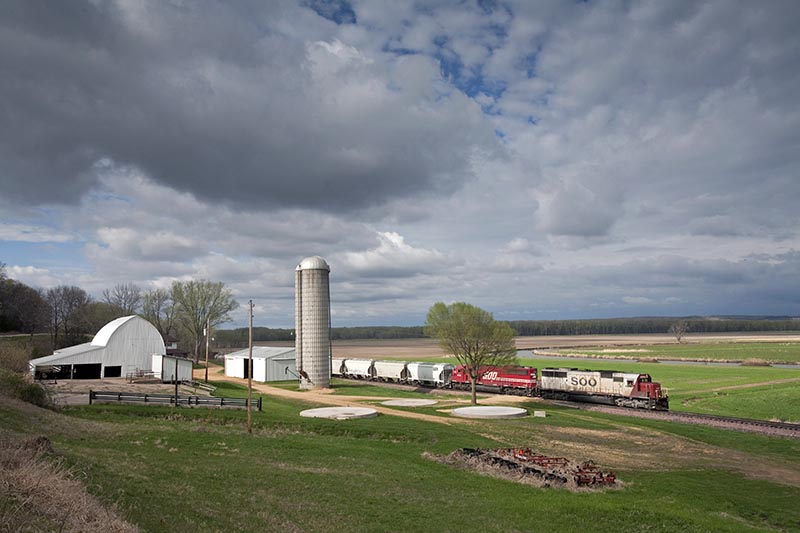 I gladly would have spent the rest of the day chasing trains up and down the river, but we still had more than 200 miles to Madison, and I had a new job to start the next morning. Besides, I knew I’d be back. I would be living close enough to the river for weekend trips, and from what I’d formerly seen of it from Amtrak’s Empire Builder, the bluff country of the Upper Mississippi Valley might just be the landscape that would sustain me — a child of the mountains — in my new home in the Midwest.

That proved wonderfully true. I returned to the Mississippi two months later for a long weekend in October, and I’ve made at least one photography excursion to the river every year since. In many of those years I’ve made several trips, including a few that spanned a full week. The Upper Mississippi ties together so many of my interests — transportation, geography, history, culture. I’ve read everything I could find about the river and explored it from Minneapolis, Minn., to Cairo, Ill., where it meets the Ohio. Along the way, I’ve hiked, camped, kayaked, attended music festivals, tucked in to Friday fish fries at bars and supper clubs, and photographed literally hundreds of trains. 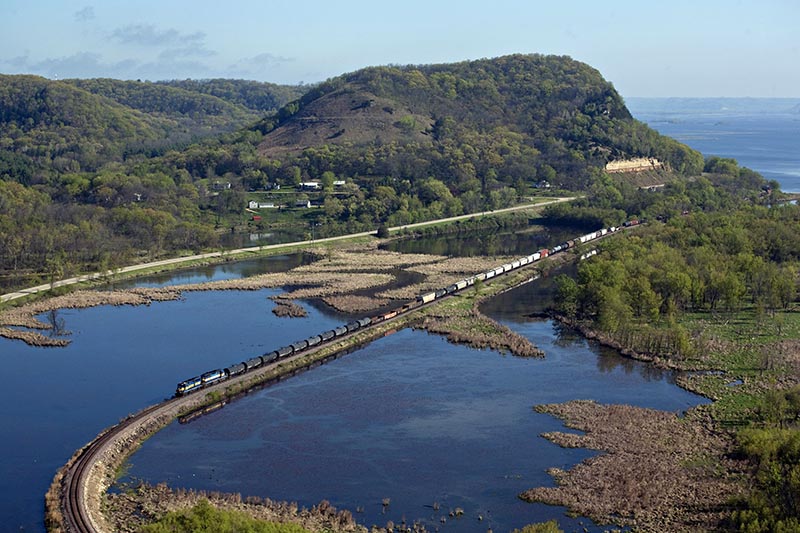 Still looking very much like an Iowa, Chicago & Eastern operation, CP Train 170 rolls through the wetlands and bluffs of Reno, Minn., on an idyllic spring morning in April 2012.

A decade after that first drive down the Mississippi, I can still go out to the CP main line and watch Train 199 heading west. Its scheduled departure out of Chicago is a little later now, so I’d need to go around the summer solstice to catch it along the river before dark, but otherwise it looks about the same — red, wide-nose General Electric diesels hauling a few autoracks and a long string of double-stacked shipping containers to Vancouver, B.C. On the railroad, not much has changed in 10 years.

In the previous century, several 10-year periods brought prodigious change to the railroads of the Upper Mississippi. The late 1970s to the late 1980s saw the bankruptcy of The Milwaukee Road and its purchase by Soo Line, which ripped up one of the two main tracks and installed centralized traffic control (CTC). In the early 1960s, passenger trains paraded up and down the railroads on both sides of the river; nearly all of them were gone by 1971, and a brand-new quasi-government corporation called Amtrak operated the few that remained. In that same interval, Chicago, Burlington & Quincy Railroad on the eastern bank was folded into Burlington Northern and became a funnel for freight traffic out of the Northwest. 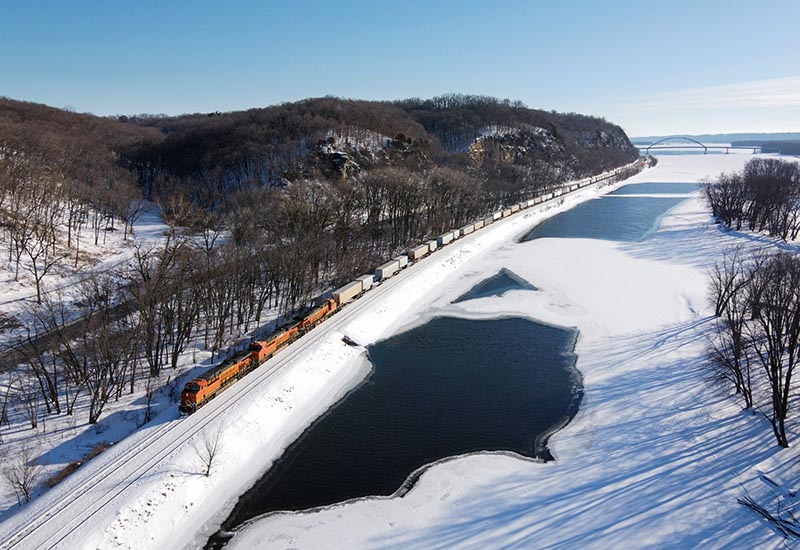 On a bitterly cold winter day at the Palisades in January 2021, a BNSF intermodal train from Chicago heads up the mostly frozen river for the Pacific Northwest. Since November 2017, the Dale Gardner Veterans Memorial Bridge has carried U.S. Route 52 over the river.

In the middle of the 1940s, steam locomotives handled most of the trains on both sides of the river; by the middle of the 1950s, steam was gone. Earlier still, throughout the 1920s, Burlington completely rebuilt its line from a single meandering track that followed nearly every twist of the riverbank into a mostly double-track speedway that, for a time, hosted the fastest passenger train schedules in the nation…

Read the rest of this article in the August 2021 issue of Railfan & Railroad. Subscribe Today!