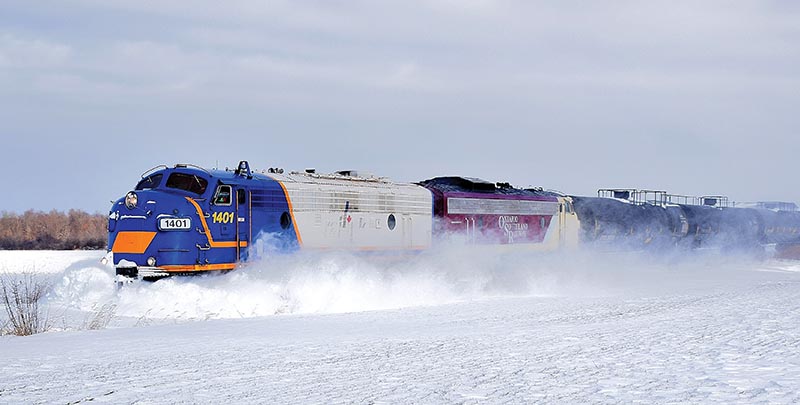 The Ontario Southland’s St. Thomas Job drifts through the snow with two classic cab units in the lead at Gladstone, Ont., on December 27, 2017. Kyle Stefanovic photo 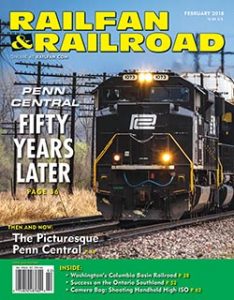 By Marcus W. Stevens/photos as noted

It is not long after sunrise, but Ontario Southland’s engine house is bustling with activity. Inside, shop personnel are busy discussing the day’s plans. There is barely enough time to finish their coffee before the road power must be readied and moved outside the shop. The sound of EMD 567 prime movers coming to life echoes off the shop walls as former Waterloo & St. Jacobs FP9 No. 6508 and mate GP7 No. 378 come to life. Outside, a pair of rebuilt former Canadian Pacific SW1200s idle away preparing to switch customers in Tillsonburg and St. Thomas. Once considered the railroad capital of eastern Canada when no fewer than six railroads served the town, today only two railroads remain in St. Thomas. Despite the decline over the last 30 years, there’s still plenty of work to do on the OSR lines.

A few miles to the north of the OSR shop, a small maintenance-of-way crew is already busy on the St. Thomas Subdivision replacing a piece of defective rail in the town of Ingersol. The crew is desperately trying to keep ahead of the OSR’s road train that runs on a tight schedule and is ordered in a couple of hours out of Salford. A lone tank car sits nearby on a short siding at Ingersoll destined for the Johnson Controls plant in Tillsonburg, with its contents used in the production of automotive seating foam.

While most railroads would show little interest in a company requiring only a single tank carload a couple of times a week, the Ontario Southland puts its customers first, no matter the number of carloads, and every load is equally important whether it is a single tank car or 50 loaded autoracks. Soon, the pair of veteran SW1200s will be called to duty at Salford to bring the lone tank car south — after all a shortline’s survival relies on its ability to satisfy its customers. 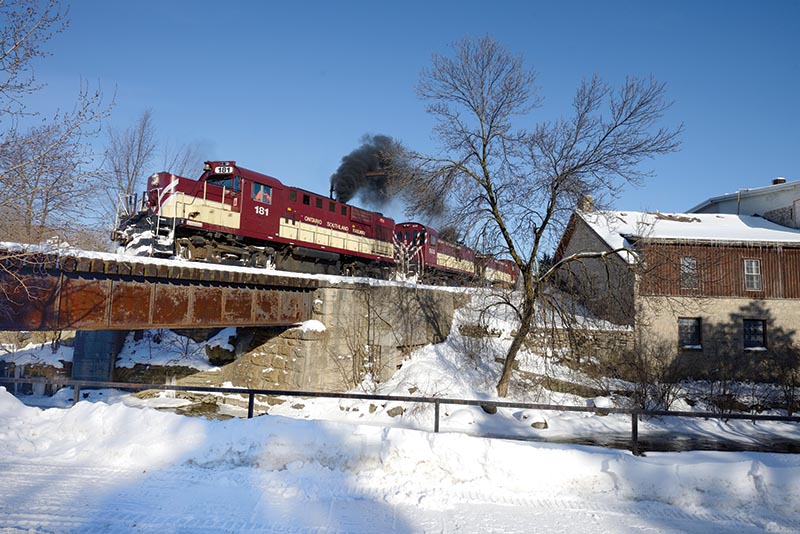 A trio of MLWs cross the bridge over the Speed River at Allan’s Mill on February 12, 2014. The first crossing was built in 1888 by the original Guelph Junction Railway. Stephen Host photo

Rising from the Ashes
The Ontario Southland has grown since its start-up in 1992, when Jeff Willsie and a few other investors put their money together to incorporate. The company started by leasing out a few small GE switchers to any industries in need. These switchers have since left the roster, and in April 1994, the company would add a sizable contract, that included switching the large Petro Canada refinery at Clarkson, Ont. Well-weathered Toronto, Hamilton & Buffalo Railway NW2 51, in full but tattered TH&B paint, would be the main power for this assignment for a number of years. Its daily switching chores would gradually pay for the unit’s overhaul and repainting into fresh TH&B paint (on which OSR loosely bases its own paint scheme). Gradually, more MLW and EMD units would be added to the company’s roster, as well as more operations.

Not long after, OSR added two former Canadian Pacific lines. The Goderich Subdivision was operated by CP until the end of the 1980s and ran all the way to its terminus at the port town of Goderich on Lake Huron. The majority of online traffic was salt and grain at Goderich, shared with Canadian National. By the end of the 1980s, the marginal amount of traffic from Goderich wasn’t enough to justify having the town served by two railways. CP’s line between Guelph and Goderich also lacked steady online traffic, unlike CN’s line to the port, so CP ultimately pulled up its line all the way between Goderich and Guelph.

The City of Guelph has always owned the line between Guelph and Guelph Junction, with CP operating as a tenant, so this portion of the line was safe from abandonment. With CP wanting out by the end of the 1990s, the city went looking for a new operator, which is where Ontario Southland picked up its second contract. This operation has grown significantly over the years, with new customers added and often two, and occasionally three, crews to be ordered on the same day. A three-stall engine house has been built at Guelph Junction; originally only for engine storage, it now has a work pit and lighting and handles servicing the line’s power. The line also interchanges with the Goderich-Exeter Railroad at Guelph. 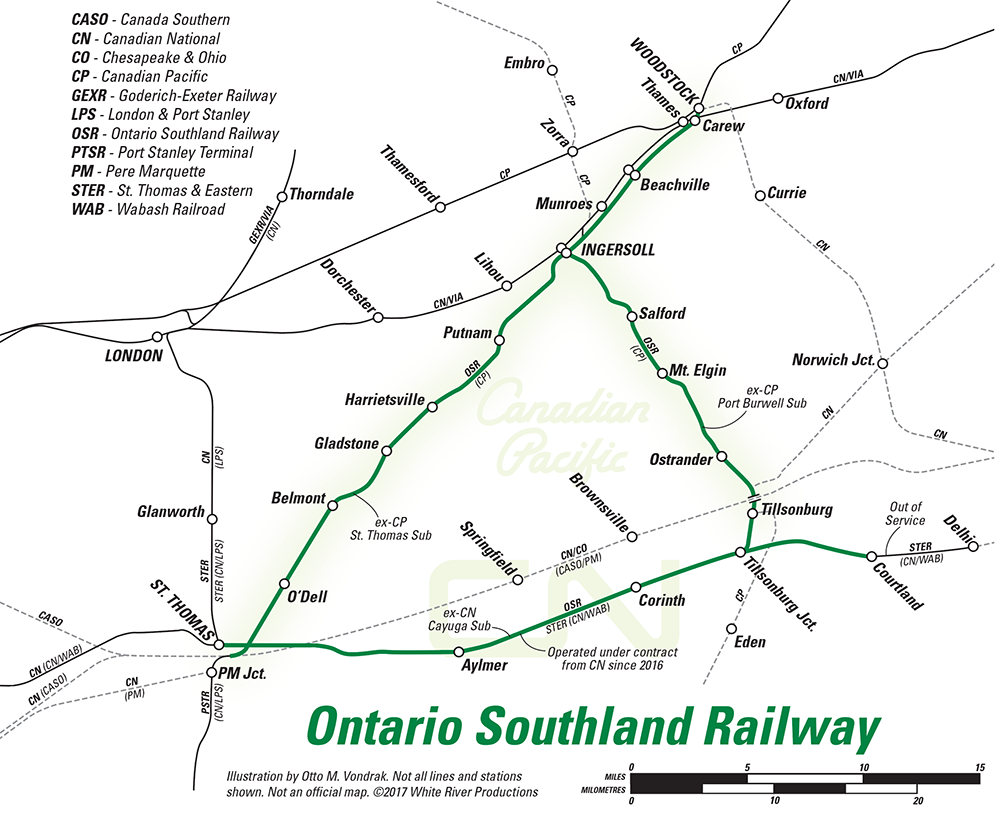 The remains of CP’s former Port Burwell Subdivision, which was cut back to operating between Tillsonburg and a connection to CP’s St. Thomas Subdivision in Ingersol, was also bought by OSR a year later, when CP made it known it wanted to abandon the line. The line is not very busy, but there is enough in Tillsonburg to justify its existence.

In late 2016, OSR began operating the former CN Cayuga Subdivision between St. Thomas and Courtland. The last operator, Trillium Railroad’s St. Thomas & Eastern, terminated service over the line a few years earlier. It remains to be seen how this will impact regular operations on the Port Burwell Subdivision, since both lines connect in Tillsonburg, making one line redundant.

By the end of June 2008, the contract to switch the refinery at Clarkson came to an end and was transferred to a new operator. This, along with a sour economy, took its toll on the OSR much like most railroads across North America — but for the OSR, there was a light at the end of the tunnel.

After losing a fair amount of traffic on its St. Thomas Sub due to a declining economy, CP was looking to shed the line, and the OSR fit perfectly into the equation, since it already had a direct connection to the line at Ingersol. OSR took over the line on December 14, 2009, and while a lot of traffic had dried up online in recent years, there was still a lot left to feed a shortline; this would give the OSR more traffic than its other two lines combined. The CAMI auto plant in Ingersoll (which builds Chevrolet Equinox and GMC Terrain Crossover vehicles), along with a large potash facility in Putnum, accounts for most of the traffic online, and since mid-2012 OSR work at CAMI has doubled with its takeover of all CN switching operations at the CAMI plant as well. 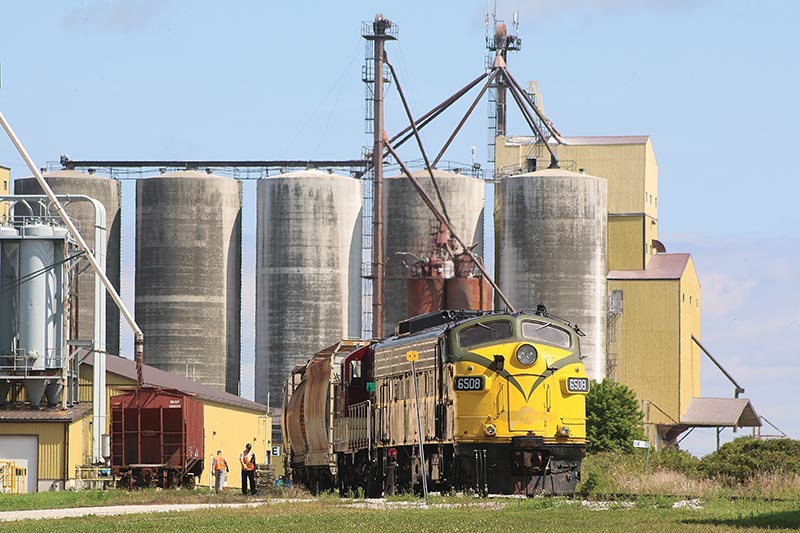 The large potash facility in Putnum towers over the OSR train as the crew switches out a cut of cars on a sunny August 18, 2014. Marcus W. Stevens photo

By the end of 2013, another line became available for a new operator in southern Ontario with discontinuance of Trillium Railway’s St. Thomas & Eastern. This operation served what remained of the former CN Cayuga Sub between St. Thomas, Tillsonburg, and Delhi. This was the remains of what was once the Canada Airline’s mainline between St. Thomas and Welland; trackage rights granted to the Wabash over this line created a link for the railroad between Detroit and Buffalo. Later, Norfolk & Western and successor Norfolk Southern would both continue to use the route until much of the line east of Delhi was abandoned in 1996, forcing remaining traffic to use other CN lines in southern Ontario. By the end of 2006, NS pulled its through trains out of Ontario for good. Deferred maintenance for the cash-strapped ST&E would finally catch up with the railroad in 2013, with a number of large bridges along the route requiring expensive repairs; this forced the railroad to call it quits on December 20, 2013.

A number of customers along the line still remain, including a pair of large grain elevators at Courtland and a large ethanol plant at Alymer. With connections to the ST&E at Tillsonburg and St. Thomas, OSR fit perfectly into the equation and quickly notified owner CN that it would like to take over the line.

Although OSR began operations between St. Thomas and Courtland in late 2016, it looks as though the section between Courtland and Delhi may be abandoned in the future. The expense to repair the bridge at Delhi outweighs the money which could be made from operating that section of the line.

The OSR shop in Salford, which opened on October 25, 2004, has also increased in size over the years, with the most recent expansion in 2012. The shop not only maintains OSR’s fleet of locomotives, but also performs contract work on other companies’ locomotives. It also leases out locomotives, as well as shop bays, to other companies when needed. A number of units from CP, Union Pacific, and CIT Leasing have spent time here for component upgrades by an outside company. The shop at Salford negated the need for OSR to lease out space at an industry in Tillsonburg, which the company was doing since operations on the Port Burwell Subdivision began… 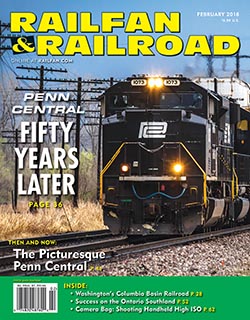