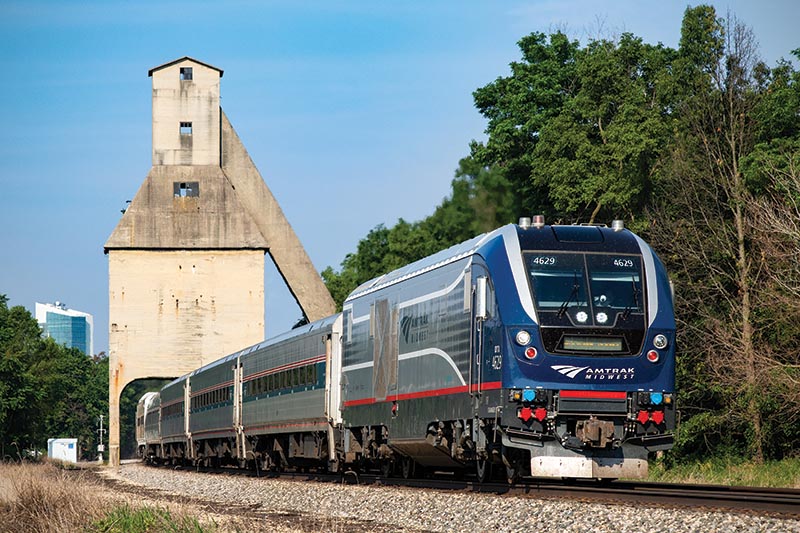 After a few weeks of test runs and crew qualifications in 2019, the Amtrak Midwest Chargers were placed into regular service on the Wolverine and Bluewater trains, running at speeds up to 110 mph. Here we see IDTX 4629 leading Amtrak Train 350 east under the old New York Central steam locomotive coaling tower in Michigan City, Ind., on July 7, 2019. Jonathon Leese photo

By Justin Franz/photos as noted

Every generation of diesel is synonymous with a specific era. That is certainly true when it comes to passenger locomotives. Think back to the 1950s and 1960s and it’s hard not to conjure up images of sleek Electro-Motive F- and E-units in a rainbow of colors leading passenger trains during the waning days of the “golden age” of rail travel. Move forward to the 1970s and 1980s and one locomotive, EMD’s F40PH, is the dominant player in North American passenger railroading, speeding commuters from suburb to city and leading long-distance passenger trains across the great expanse of the American West. Fast forward another 20 years and EMD has been dethroned by an insurgent General Electric and its Genesis series of locomotives which would dominate the passenger rail scene in the late 1990s and early 2000s. But GE’s reign at the top of the passenger diesel locomotive market would be short-lived, swept away by a new player that until just a decade ago, had never even produced a locomotive for the North American market but is now dominating it.

In the last few years, Siemens Mobility has emerged as the primary manufacturer of passenger locomotives. Its Charger-series locomotive can now be found from sunny south Florida to the rainy Pacific Northwest. And, in the coming months, with the arrival of 75 ACL-42 locomotives for Amtrak, it will become the “new face” of America’s national passenger carrier.

Train A768, a mid-morning Surfliner corridor service train between Los Angeles and San Diego, eases out of its station stop in suburban Fullerton, Calif., behind Caltrans SC-44 2116 South on April 13, 2019. With its overhead views and scenic angles, the Fullerton station is a very popular Southern California train-watching spot. Nikki Burgess photo

German Roots
While the Siemens Charger has been in service in North America for only about five years, the company that created it can trace its own roots back to 19th century Germany. Werner von Siemens, a 30-year-old inventor, discovered a way to dramatically improve the electric telegraph in 1847 and founded Telegraphen-Bauanstalt von Siemens & Halske (Siemens & Halske Telegraph Construction Co.) with mechanic Johann Georg Halske that fall. The company started with just 10 employees working out of a building in the back of a courtyard in Berlin. They found success quickly, and the following year won the contract to build Europe’s first long-distance telegraph line.

In the succeeding decades, it would become the largest industrial manufacturing company in Europe with divisions in different industries, including rail transportation. In May 1879, it debuted the world’s first electric railway at the Berlin Industrial Exposition. The little 150-volt train was powered via electricity supplied by an insulated flat iron bar mounted between the rails. The three-car train wowed spectators at the fair. Werner von Siemens knew he was on to something and afterward enthusiastically wrote to his brother, “This is something we certainly can develop!”

A year later, von Siemens was trying to build an elevated railway through Berlin but it was rejected by property owners. Undeterred, he built a short electric tramway in the city at his own expense to continue demonstrating what the technology could do. In the years to come, Siemens-built electric trams and mining locomotives could be found all over Europe. In 1899, Siemens and several other firms teamed up to form the Studiengesellschaft für Elektrische Schnellbahnen (Society for the Study of Fast Electric Trains) to push electric railway technology even further. Two years later, the group was testing two locomotives on a military-owned rail line. In 1903, the first high-speed Siemens locomotive reached 130 miles per hour, a world record that would not be broken for 50 years. February 10, 2018, found WDTX 1401 South rolling Cascade Service Train A505 through Puyallup, Wash., and under the arms of mighty Mount Rainier, the 14,410-foot stratovolcano that, along with the Puget Sound, is the defining geographic feature of the Seattle-Tacoma metroplex. A505 is a mid-afternoon train and thus often appears in good light for this shot at 56th Avenue in Seattle’s south suburbs. Nikki Burgess photo

One of Siemens’ most successful early locomotives came in 1930 when it created the E44 (not to be confused with the GE locomotive of the same classification), a multi-purpose electric that weighed less than half of the conventional electric locomotives on the market at the time. The locomotive was a hit and examples of it were used in Germany for decades.

In the 1980s, Siemens became a major manufacturer of light rail vehicles, including for the U.S. and Canada, and opened a manufacturing facility in Sacramento, Calif., in 1984. Seeing that rail and transit would be a growing part of its portfolio, Siemens Transportation Systems (also known as Siemens Mobility) was formed as a separately managed company in 1989. In the early 1990s, the company introduced its EuroSprinter series of electric locomotives for both freight and passenger service. In 2010, Siemens introduced the successor to the EuroSprinter, the Vectron. The Vectron has been offered as both a diesel and electric locomotive (and as a dual mode). The four-axle locomotive featured a boxy, yet sleek, design that would soon travel across the Atlantic.

Coming to America
By 2010, Siemens had become a dominant player in the transit market, building one out of every three light rail vehicles sold in the U.S., but had yet to make the jump to heavy rail manufacturing. That all changed on October 29, 2010, when the company announced a $466 million deal with Amtrak to build 70 ACS-64 locomotives, dubbed “City Sprinters,” for use on the Northeast Corridor. “This order for the Cities Sprinters is our first opportunity to supply a Siemens locomotive to the American market, the second-largest in the world,” said Hans-Jörg Grundmann, CEO of Siemens Industry Mobility Division. “This order shows that we are capable of offering the right solutions for regional and long-distance passenger rail service in the United States.” During the first week of revenue service, Coaster Charger locomotive 5001 hauls Train 639 toward Oceanside, Calif., as it begins to climb the 2 percent northbound grade up Miramar Hill on February 11, 2021.  Michael Armstrong photo

The ACS-64 locomotives were a heavily modified version of the EuroSprinter series, made to comply with American crashworthiness standards including a strengthened cab. The locomotives produce 8,600 hp and were designed to move an 18-car train at speeds up to 125 mph. The first ACS-64 entered service in 2014. The locomotives were assembled in Sacramento but included parts from 64 manufacturers in 23 states. In 2015, Southeastern Pennsylvania Transportation Authority (SEPTA) also placed an order for 15 ACS-64 locomotives for use in Philadelphia. The first one entered service in 2018.

The ACS-64 would give Siemens a foothold into the North American market, but its big break would come in March 2014, when it inked a $225 million contract with a coalition of states to produce nearly 70 SC-44 “Charger” locomotives for state-sponsored Amtrak services. While the Charger has influences from the ACS-64 and Siemens’ European products, its design was also heavily influenced by the work of the Next Generation Corridor Equipment Pool Committee. That group was created in 2010 after Amtrak was directed by Congress (thanks to the Passenger Rail Investment and Improvement Act of 2008) to bring stakeholders together to come up with new standards for the “next generation” of passenger rail equipment that would be purchased with federal funds.

The standard SC-44 Chargers have a 4,400 hp-rated Cummins QSK95 diesel engine and can reach speeds of up to 125 mph. The locomotive meets Tier 4 emission standards set by the Environmental Protection Agency. Starting in 2016, Siemens began delivering Chargers to the Illinois Department of Transportation for use on Amtrak’s Midwest services (33 total units), Caltrans for use in southern California (22 units, with eight branded for Pacific Surfliner service and 14 for Amtrak California), and the Washington Department of Transportation for use on Amtrak’s Cascades service in Washington and Oregon (eight units, although one has since been wrecked and scrapped)…

Read the rest of this article in the May 2021 issue of Railfan & Railroad! Subscribe Today!