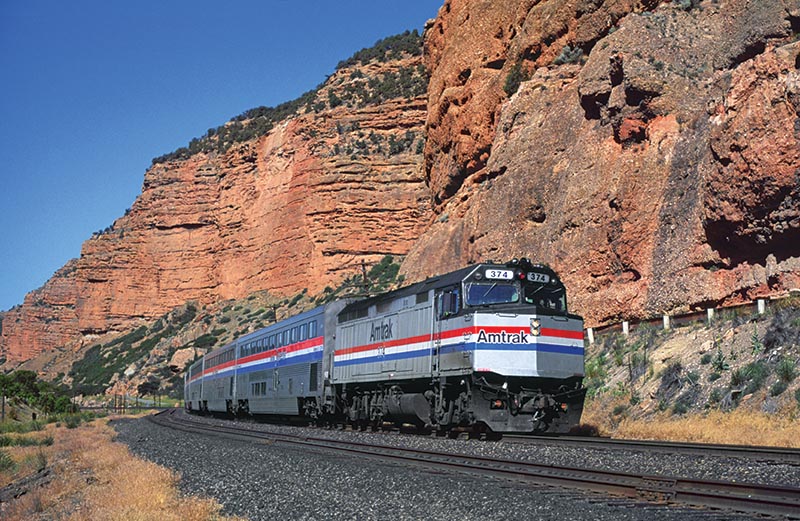 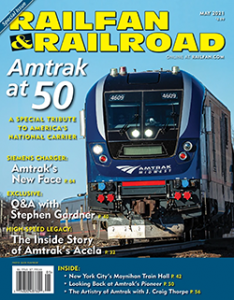 By Ryan Reed/photos as noted

They said it was like seeing a long-lost friend given up for dead. Union Pacific’s City of Portland and Portland Rose streamliners were iconic symbols of southern Wyoming, Idaho, and northern Oregon. Unfortunately for local residents who knew the trains intimately, neither would make it into the new Amtrak system timetable on May 1, 1971. The grand Boise, Idaho, depot, the pride of the city with its early 20th-century architecture, stood silent, unnatural as that was. When Amtrak’s Pioneer rolled into town for the first time, a six-year-old wrong had been righted.

Getting a passenger train back was not an easy task though. Extensive lobbying by Idaho Governor Cecil Andrus and senators Frank Church and Jim McClure, along with other members of Idaho’s congressional delegation, lasted for years. The efforts finally proved successful, although the new Pioneer would start out as a two-year experimental route and was definitely “on the bubble,” as they say.

Between June 4 and 6, 1977, a pre-inaugural train for the press and locals ran south from Seattle on Burlington Northern tracks, then eastward from Portland, Ore., on UP’s main line, stopping at each station along the route. Deep in the spectacular Columbia River Gorge, reflections of summer sun glistened from wind-blown, choppy waves to the sides of brand-new Amfleet coaches and back again. Something special was truly in the making.

At Pendleton, Ore., and within sight of the Oregon Trail, the namesake for the new train, some 3,000 locals walked through the four Amfleet coaches and two Amdinettes as a high school band played in sweltering 95-degree heat. 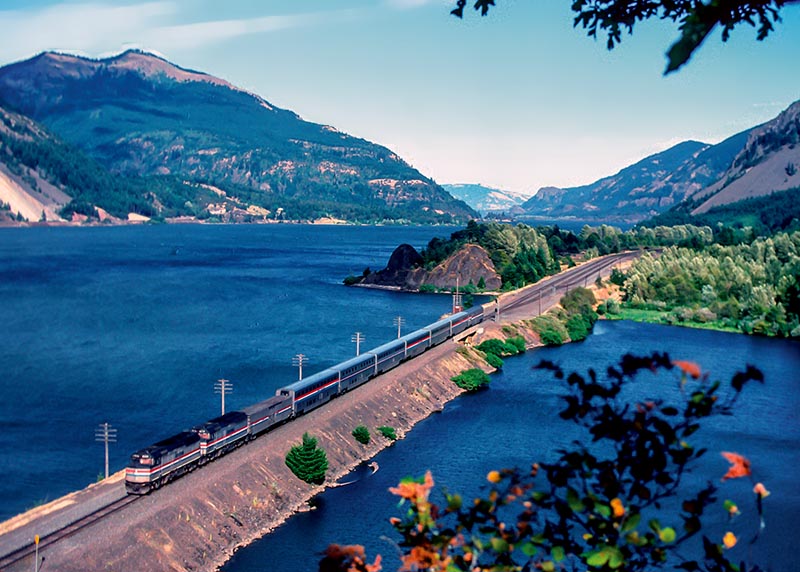 The route through the Columbia River Gorge afforded passengers with some of the best scenic views in the Pacific Northwest. Rolling through Wyeth, Ore., on August 17, 1996, the westbound Pioneer is but 50 miles from Portland. Ryan Reed photo

By late afternoon, the train was parked in La Grande, Ore., for the night. The small town at the eastern base of the Blue Mountains boasted a yard, engine facilities, and an ornate brick station. The journey so far had rolled more than 300 miles and over a mountain pass, taking some of the glint off the sides of the train and dirtying the windows.

With contractors unavailable to wash the two F40PHs and six cars, local high school students came to the rescue with hoses, brushes, and buckets. Amtrak even paid the kids, money they later spent on summer camp. At Boise, Amtrak President Paul Reistrup spoke to the crowd, and as the train later stopped in Ogden, Utah, and Salt Lake City, local newspapers appealed to their readers to support the Pioneer by riding it often.

The Pioneer Era Begins
On June 7, 1977, trains 25 and 26 were added to the Amtrak system. The trains consisted of an F40PH, two Amfleet coaches and an Amdinette, operating on Union Pacific rails for 896 miles from Salt Lake City back to Portland. At Troutdale, Ore., the Pioneer was routed onto the Graham Line to East Portland and across the Steel Bridge over the Columbia River into Portland Union Station. From there, the Pioneer traveled an additional 183 miles north up Burlington Northern’s busy main line to Seattle’s King Street Station. 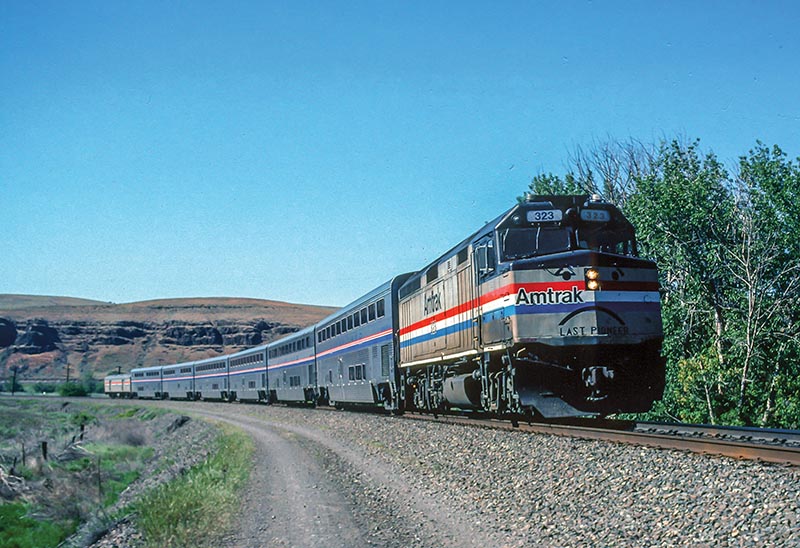 With a sad face painted on its nose, Amtrak 323 leads the final eastbound Pioneer as it curves through the Umatilla River Canyon, 203 miles into its swan song on May 10, 1997. Ryan Reed photo

To support the train, Amtrak spent half a million dollars upgrading 13 stations along the line, as well as installing small shelters (unflatteringly known as “Amshacks”). They were unmanned and poorly designed, and when the clear plastic windows faded to milky white, passengers could hardly see out of them.

In 1978, Amtrak spent an additional $2.75 million to convert 25 steam-heated Budd 10-6 sleepers to head-end power, allowing the cars to operate with the new Amfleets. While the sleepers were originally upgraded to operate on the Washington, D.C.–Boston Night Owl, Washington–Chicago James Whitcomb Riley, Chicago–New Orleans Panama Limited, and the Washington–Montreal Montrealer, they found their way to the Pioneer as well. Similarly converted full baggage cars were added around the same time…

Read the rest of this article in the May 2021 issue of Railfan & Railroad! Subscribe Today!