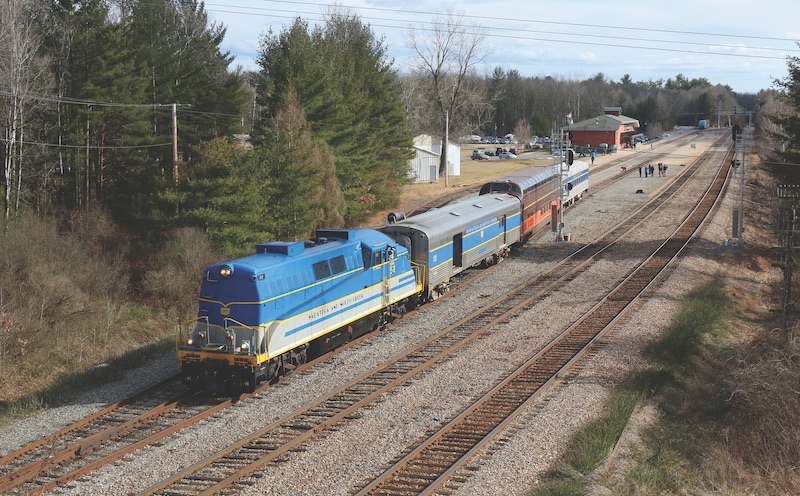 The owners of Doc N Duchess Rails LLC paid $3.33 million for 30 miles of track that they hope to move freight on. The last Saratoga & North Creek Railway train is seen on April 7, 2018. Photo by Richard Hover.

NORTH CREEK, N.Y. — The fate of a portion of the beleaguered Saratoga & North Creek Railway was in doubt because the high bidder in a recent auction has not submitted a deposit for the assets, local media reported.

Doc N Dutchess Railway, a New Mexico-based LLC formed by Carol McLean-Wright and her husband John Wright, submitted a high bid of $3.3 million for the line this spring. However, the trustee, William Brandt Jr., told the Adirondack Explorer that they failed to submit a timely deposit on the assets.

Brandt told the paper that he is negotiating with the second-highest bidder, a North Creek rail biking company, for the sale of the 28-mile line between North Creek and Tahawus, N.Y. He added that there is still a chance that Doc N Duchess’ bid could be executed, but that the timeframe was narrowing. The couple told the paper that they remain committed to closing the sale, with returning freight to the line an important goal.

The railroad, most recently part of the bankrupt Iowa Pacific empire, was built in the 1870s and eventually became part of the Delaware & Hudson. In 2011, Iowa Pacific acquired it and formed the Saratoga & North Creek, which ran until 2018. The sale would include track and associated infrastructure, including the North Creek depot, where President Theodore Roosevelt was sworn in after learning that President William McKinley has been assassinated.