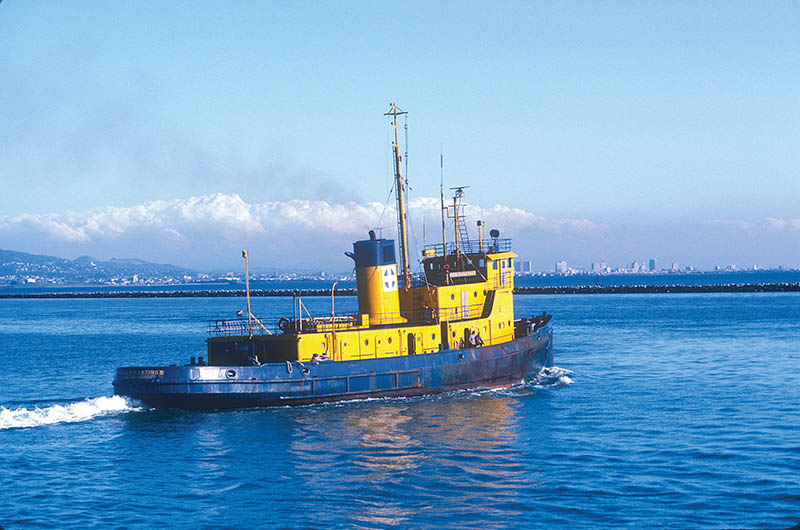 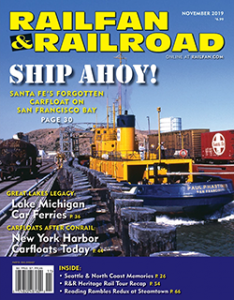 By Steve Arnold/photos as noted

It’s difficult to imagine the sprawling railroad operations that once dominated San Francisco’s waterfront. As freight traffic moved away from the city in the 1970s and gentrification took over downtown in the 1980s, Atchison, Topeka & Santa Fe’s base at China Basin remained the sole holdout of a once busy freight handling operation.

Displeased with Southern Pacific’s apparent stranglehold monopoly on traffic destined for the coast, local businessmen chartered San Francisco & San Joaquin Valley Railway in 1895 to build a competing route from Bakersfield to San Francisco. Santa Fe gained access to the fertile Central Valley of California and the Bay Area with the acquisition of SF&SJV and subsequent trackage rights over Tehachapi Pass in 1898. This brought Santa Fe to its farthermost terminal of Richmond, Calif., by summer 1900. From this new waterfront terminal, there was no way for the railroad to directly serve San Francisco from Richmond Yard, so crossing the bay by boat was the only option. Over the years, Santa Fe used a total of eight tugs, nine barges, and three passenger ferry boats to serve as connections to San Francisco.

Santa Fe’s Navy
Throughout the history of Santa Fe’s navy, carfloat operations handled traffic between Ferry Point in Richmond and Northwestern Pacific in Tiburon; State Belt Railroad Pier 36 at Powell Street in San Francisco; Alameda Belt Line in Oakland; and its own yard at China Basin in South San Francisco. The NWP slip at Tiburon closed in 1967, ABL’s slip followed in 1970, and the State Belt operation lasted until 1981, which left Santa Fe as the sole operator of carfloats across the bay. 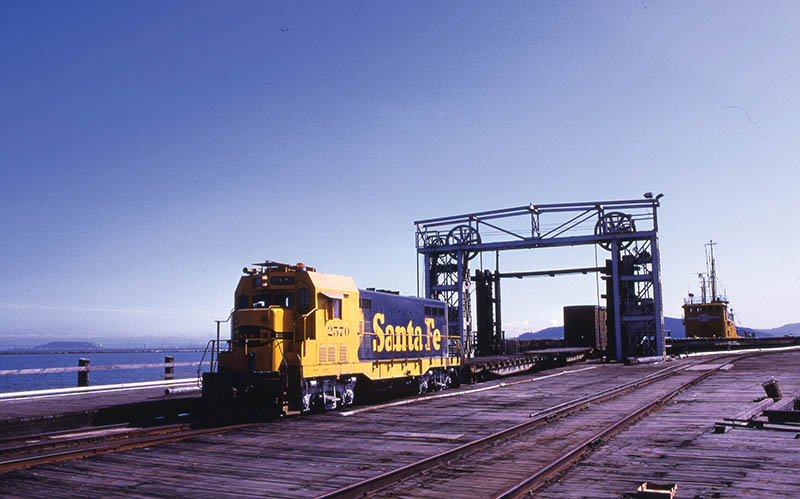 “Boat flats” were 40-foot flatcars used as “reachers” to pull freight cars off the carfloats, seen at Ferry Point in Richmond in July 1983. Santa Fe CF7 2570 is assigned to switching duty on this day. Phil Gosney photo

After 1976, the last remaining vessel of Santa Fe’s marine fleet was tugboat Paul P. Hastings. Built in 1945 by Marietta Manufacturing Co. as LT (Large Tug) 814, it was sold to Santa Fe in 1948 and assigned to San Francisco. It was named in honor of Paul Hastings, vice president of traffic for the railroad, who died in 1947. The boat was converted to diesel propulsion in 1964.
The China Basin facility once had 29 tracks and served many local customers, but had since been downgraded to a small yard. It hosted one daylight train, Job 111, and an afternoon Job 211. By the 1980s, car movements were not what they used to be. Scheduled as eight-hour jobs with not a lot of work to be performed, there was considerable free time for the crews, so these became very high-seniority jobs. I worked them off the extra board both as a switchman and, later, as an engineer. Cars were interchanged with Southern Pacific, Western Pacific, and San Francisco Belt, with a handful coming over by barge from Richmond Yard.

During carfloat operations, Richmond cars destined for China Basin were switched into stub Track 17 at the west end of the yard in no particular order. When it came time to load the “boat,” switch lists were received by the switch crew from the yardmaster. All the cars on Track 17 had a circled number from 1 through 14 depending on the length of each car. The carfloat barge had three tracks, and if all the cars were 50 feet, you could load four in the center and five each on the port and starboard tracks. 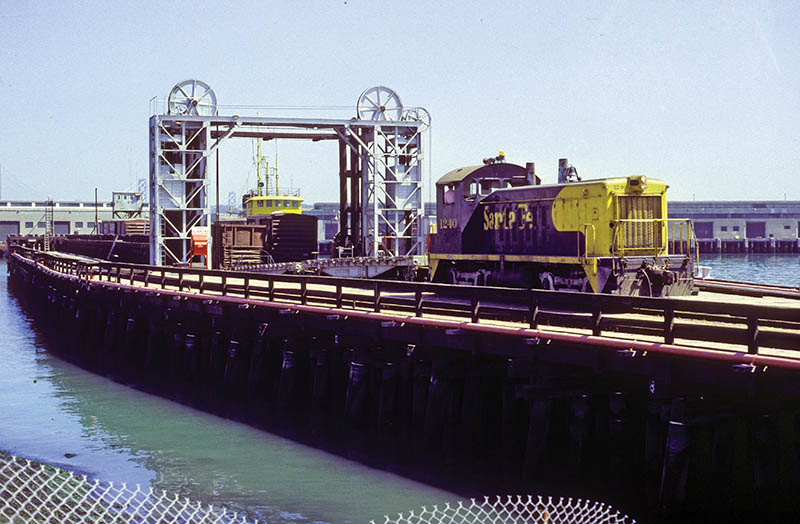 The yardmaster calculated the weights and lengths of each car and was ultimately responsible to see that the loading was properly balanced. It was the job of the switch crew to line up the cars in numerical order with car No. 1 at the west end of the cut. This put the heaviest cars first out and these would be the first cars loaded on the center track.

The yard foreman always double-checked weights and lengths before loading. After determining everything was correct, the train line air hoses were connected and an air test of the brakes was made to ensure they were all working properly for the ride across the bay…