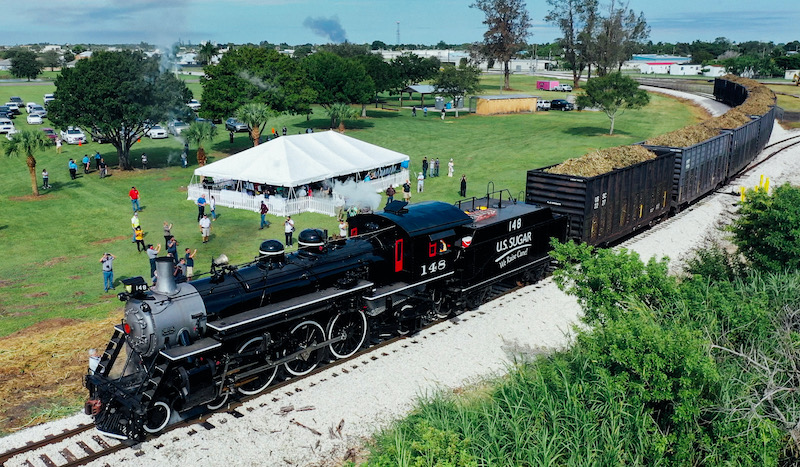 CLEWISTON, Fla. — Santa Claus is trading in his old red sleigh for a high stepping, glossy black 4-6-2 in Florida.

On Saturday, Dec. 12, the recently restored U.S. Sugar 4-6-2 148 will be fired up to lead a train delivering hundreds of gifts to the Toys for Tots programs in Moore Haven, Clewiston, Belle Glade, and Martin County. Santa will be along for the ride as well, waving to children along the route and accepting their wish lists at the four different stops.

On Tuesday, U.S. Sugar released the following schedule for the event.

The company is asking the public to practice social distancing and wear a face covering when they gather to see the locomotive and Santa.

The recent restoration of 148 is a homecoming of sorts for the classy looking Pacific. The oil-fired locomotive was built at Alco’s Richmond Works in April 1920 and worked in passenger service for Florida East Coast before being sold to U.S. Sugar in 1952. At U.S. Sugar, the locomotive moved sugar cane from the fields to a mill at Clewiston, Fla. After it was retired by US Sugar, 148 briefly returned to passenger service in the 1970s at New Jersey’s Black River & Western and Morristown & Erie. The locomotive saw a number of owners after that and spent time in Colorado, Michigan and Connecticut. In each instance, hopes to restore the locomotive to operation always faltered. In late 2016, U.S. Sugar repurchased the locomotive and brought it back to Clewiston for restoration. The restoration was completed in early 2020 in partnership with FMW Solutions, LLC.

U.S. Sugar’s South Central Florida Express operates on more than 200 miles of track in central Florida, much it still used to haul cut sugar cane from field to factory, the last such operation in the country.