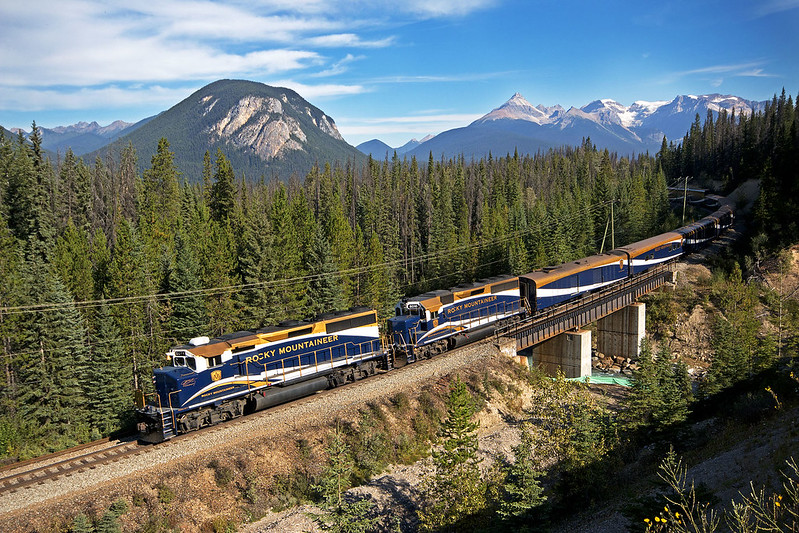 The Rocky Mountaineer near Field, B.C. Photo by Justin Franz.

VANCOUVER — The Canadian tour company that operates excursions in British Columbia and Alberta plans on launching a new route in the United States in 2021. Rocky Mountaineer will launch the Rockies to the Red Rocks route next August between Denver and Moab, Utah, along the route of the former Denver & Rio Grande Western.

The tour company expects to make 40 trips over 10 weeks from August 15 to October 23, 2021. The trip will take two days to get across the old D&RGW and make an overnight stop in Glenwood Springs, Colo.

“The work to find a new route has been underway for several years as we needed to find a special location with many of the same features we have in Western Canada – incredible scenery, iconic destinations, and the option for an all daytime, multi-day journey that is best experienced by train. The Rockies to the Red Rocks will have all of this and more, and is an opportunity to bring our award-winning Rocky Mountaineer experience to showcase the epic scenery of the Southwest United States,” said Steve Sammut, president, and chief executive officer of Rocky Mountaineer. “The coronavirus pandemic has had a devastating impact on the travel industry, and there is continued uncertainty of when tourism will recover. However, we believe American travelers, and those from around the world, will be eager to explore this region by rail with us and we look forward to welcoming them in 2021 and beyond.”

Rocky Mountaineer presently operates tour trains on the Canadian Pacific and Canadian National between Vancouver and Jasper and Banff.

While Amtrak presently operates over parts of the same route, the new tour would offer the rare opportunity to ride down Union Pacific’s Moab Branch. The new train is also sure to excite railroad photographers since it’ll add another move to the mostly-quiet Rio Grande route. With the decline of coal traffic, UP operates few trains on the route and most moves are either BNSF Railway freights on trackage rights or Amtrak.

Since it was founded in 1990, Rocky Mountaineer has welcomed more than 2.2 million guests and become the largest privately owned luxury tourist train in the world.