Passing under the New York State Thruway in Kingston, N.Y., with a Santa Train excursion, No. 401 wears an NYC-inspired lightning stripe rendered in CMRR colors. The beefy ex-Illinois Terminal RS-1 is used on all trains originating in Kingston. Photo by Otto M. Vondrak

by Otto M. Vondrak/photos by the author

According to Washington Irving’s popular legend, Rip Van Winkle wandered up into the Catskill Mountains of New York and fell asleep for twenty years. When he awoke, he had to come to terms with the strange new world surrounding him.

Conrail was barely six months old when the last freight train off the Catskill Mountain Branch tied up in Kingston, New York on October 3, 1976. The connection to the mainline was spiked shut, and it seemed that the Delaware & Ulster was headed for its own deep sleep.

Chartered in 1866, the old “Up & Down” traced a grueling route over the Catskill Mountains, reaching Oneonta and a connection with the Delaware & Hudson in 1900. Surviving on lucrative passenger and freight traffic, improved roads and the Great Depression took its toll. The line was acquired by the New York Central in 1932 as a concession, and renamed the Catskill Mountain Branch. Passenger trains came off in 1954, and freight service continued through the Penn Central era, though diminishing more and more each year. Penn Central had already applied to abandon the branch by the time Conrail took over in 1976, but a six-month subsidy kept the line in operation until the remaining customers could switch to alternate modes of transportation. The last train took days to cover the route, due to the deteriorated condition of the tracks and roadbed. 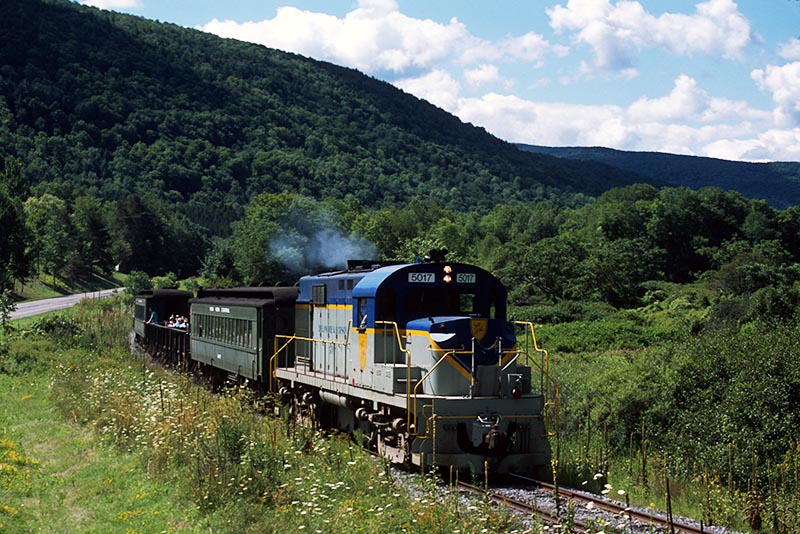 Former Delaware & Hudson 5017 grinds through the S-curves near Arkville, N.Y. on the Delaware & Ulster Railroad. The RS-36 was built new for D&H in 1963, and is perfectly suited for DURR’s long trains.

The awakening began in 1979 when Ulster County purchased 39 miles from Kingston to the county line at Highmount, and leased to the new Catskill Mountain Railroad. The railroad from Highmount to the end of track at Bloomville was purchased by Delaware County in 1980 and leased to the Ulster & Delaware. Fast forward thirty years, where CMRR president Earl Pardini is at the throttle of lightning-striped Alco RS-1 401. Pardini was a brakeman on the last Conrail freight to work on the Catskill Mountain Branch. Now retired from CSX, he is part of a team of dedicated volunteers working to repair and reconnect Kingston to the scenic beauty of the Catskill Mountains. At the other end of the line, DURR’s hard-working ex-Delaware & Hudson RS-36 can be found hauling the railroad’s mix of heavyweight and stainless equipment between Arkville and Roxbury.

A new generation of vacationers and sportsmen are once again discovering the scenic beauty of the Catskills. The region will look to green transportation alternatives to handle the new influx of visitors to Catskill Park. Volunteers are out every weekend clearing brush, repairing washouts, and keeping the railroad in a good state of repair. The railroads of the Catskill Mountains are wide awake, ready to embrace the new world around them.