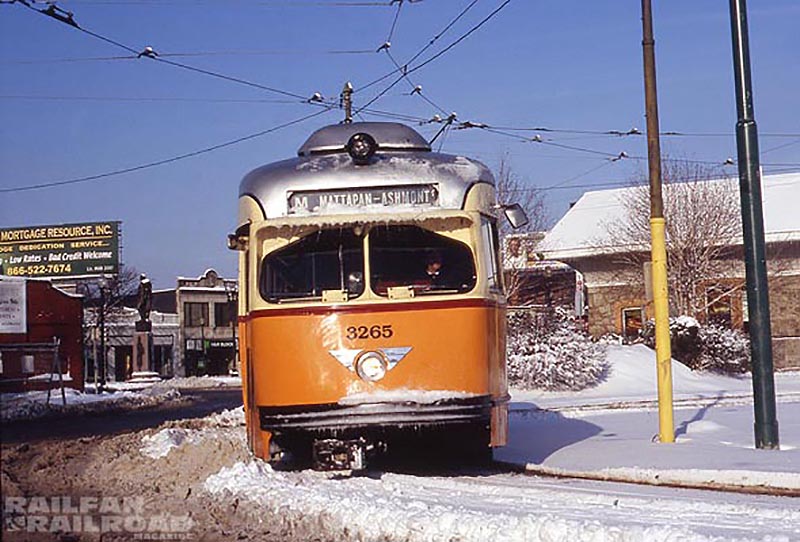 Car 3265 negotiates the tight snow-bound loop at Mattapan on the Massachuetts Bay Transportation Authority’s Mattapan High Speed Line in December 2006. This car is part of a fleet of “wartime” PCC’s built by Pullman-Standard between 1945-1946 for the Boston Elevated Railway, operator of transit lines throughout the city of Boston.

Traditional trolleys and streetcars have always had a rough time in the United States. After the end of World War I, trolleys were on the defensive as many cities expelled them from crowded city streets in favor of more flexible bus routes.

Most smaller systems had completely shut down by the 1930s, done in by the Great Depression. Those that remained developed a new kind of standardized and streamlined car to help bring down costs and attract new riders. Designed by the President’s Conference Committee, the so called “PCC” car was adopted by systems coast to coast, in production from 1936 to 1952.

Any lines that had not succumbed to the Depression years were done in by the post-war automobile boom. In the east, only a handful of cities maintained trolley operations, by now in the hands of a public authority. Boston’s Massachusetts Bay Transportation Authority (MBTA) inherited a large network of surface and subway routes when they took over in 1964. They also inherited a very tired fleet of PCC’s that were in need of overhaul. Because they did not have enough cars to maintain service on all lines, the Watertown “A” branch was the first to be suspended in 1969. The arrival of new LRV equipment in the mid-1970s allowed most of the PCC’s to be retired. The exception was the Mattapan High-Speed Line.

Consisting of eight stations on a dedicated right of way, this former New Haven branch line shuttles passengers from the end of the Red Line subway in Ashmont through Milton to Mattapan. The quiet woodland right of way is stark contrast to the urban terminals at either end of the line. A fleet of 10 PCC’s were retained for this service, but were showing their age as they entered the 21st century. A rebuilding program that started in 1999 helped extend the life of these cars, while adding a touch of class with a vintage paint scheme that pays homage to their former operator. The shuttle was shut down for a year between 2006 and 2007 in conjunction with a project that involved rebuilding both Ashmont and Mattapan terminals. The rest of the line remains largely unchanged, much to the delight of traction fans everywhere. 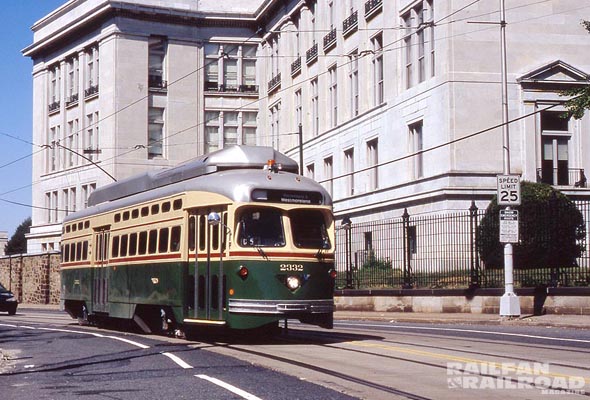 Meanwhile in Philadelphia, the Southeastern Pennsylvania Transportation Authority (SEPTA) acquired the routes of the old Philadelphia Transportation Company (PTC) in 1968. Like Boston, a number of surface and subway trolley routes radiated out of Center City into the surrounding suburbs. A devastating carhouse fire in 1975 wiped out a good portion of the PCC fleet. With the arrival of newer LRV’s, many more cars were retired in the 1980s. Trolley routes were shut down in response to rising costs and fleet availability. In 1992 the Route 15 Girard Avenue line was “suspended” and replaced with buses, along with Routes 23 and 56.

The remaining 18 PCC’s were sent out for rebuilding in 2003-2004, and returned as PCC-II’s painted in a classy rendition of PTC green and cream. After many years of negotiation and reconstruction, Route 15 service was restored in 2005. Ridership has been steady, and there have been calls for the restoration of Route 23, which had been SEPTA’s most heavily traveled surface route through Center City. The remaining trolley lines use newer cars delivered by Kawasaki in 1981.

Today, tourists flock to San Francisco’s restored PCC’s on The Embarcadero. The volunteers from Market Street Railway dub their vehicles “Museums in Motion.” While the PCC’s provide an essential and popular transit service, the focus is on the historic nature of the trolleys. In Boston and Philadelphia, while the trolleys may be historic, they sure don’t feel like museums. Some cities are spending umpteen years and millions of dollars trying to replace the extensive electric railways they once had. Meanwhile, unique opportunities exist in Boston and Philadelphia to enjoy classic trolley operations that are still going strong.