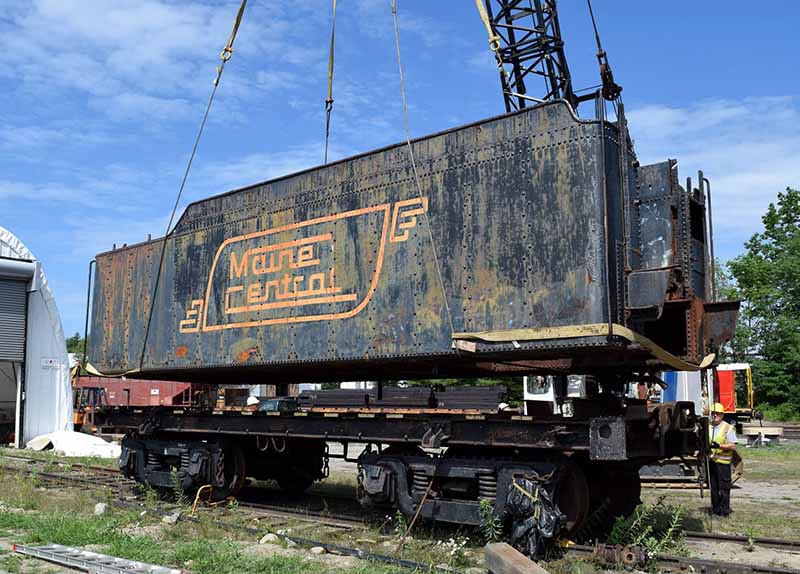 ELLSWORTH, Maine — Officials with the non-profit group restoring Maine Central 4-6-2 470 say they are getting closer and closer to completing the restoration of the locomotive’s tender.

Locomotive 470 is one of only three surviving MEC steam engines in existence. The American Locomotive Company built the passenger locomotive in May 1924 and it led the railroad’s last steam-powered train in 1954. It sat on display in Waterville for decades before New England Steam Corp. purchased it in 2015. It is being restored at the Downeast Scenic Railroad.

While volunteers have been picking at various projects over the last few years, the tender has been their big focus. In 2020, a brand new tender body was built by Millinocket Fabrication & Machine. Leverett Fernald, chief mechanical officer and president of New England Steam, said while the tender frame is still usable, the body that holds water and coal had deteriorated significantly after years of exposure to the elements.

“The old tender tank was just too far gone and the idea of reusing it just didn’t hold water,” Fernald said.

Late last year, the tender frame was sandblasted and painted. This year, the drawbar pin holes were line bored and new wear liners pressed in. The restoration of the trucks was completed this year with the help of Pan Am Railways’ Waterville Shops assisting with wheel work. In late December the frame was placed back onto the rebuilt trucks. Leverett said once some brake work is completed on the frame, the tender body will be put back on, hopefully sometime this year.

A big question has been what will the tender be painted. Fer​​nald said that’s an easy one: They plan on painting it in the iconic Maine Central speed lettering of the late steam era.

Once the tender is back together, volunteers will start working on the next big tasks, including running gear and the boiler. Fernald said there’s no timeline for when the locomotive will be completed, but he said if anyone wanted to cut a (big) check, it’ll be steaming through Downeast Maine sooner rather than later.