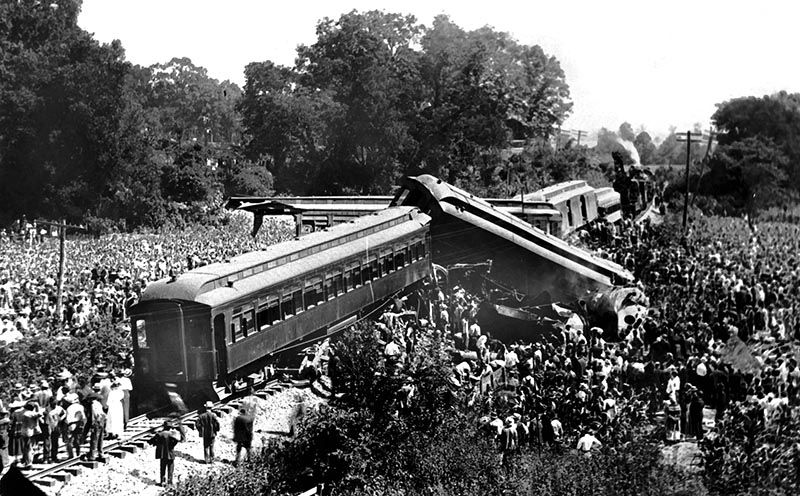 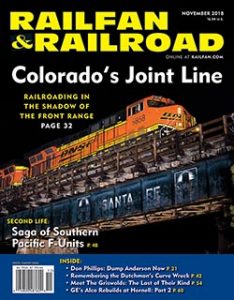 Historians and family members stood on the concrete “White Bridge” in Nashville, Tenn., overlooking the well-maintained CSX track below on the morning of July 9, 2018. Mayor David Briley gave brief remarks about the event that brought the crowd to this location as part of the brief ceremony marking the 100th anniversary observance of one of America’s worst train disasters. Following the mayor’s speech, Betsy Thorpe, historian and author of The Day the Whistles Cried, joined others to read the names of those who perished in the collision. After the solemn event, an eastbound CSX double-stack train blasted under the bridge. After the train passed, someone in the crowd tossed down some flowers off the bridge, which landed between the rails. It seemed like a fitting end to a tribute to those who died in a tragic event that history had almost forgotten over the decades.

Dutchman’s Curve Wreck
It was on July 9, 1918, that two passenger trains of the Nashville, Chattanooga & St. Louis Railway collided head-on approximately five miles west of Nashville, claiming 101 lives (initial reports said 121, a number that was later revised). The tragedy would later be attributed to human error and a missed signal. It was unclear exactly who was at fault, whether it was the engineer, conductor, or a tower man. The location of the wreck was also known by railroaders as “Dutchman’s Curve” and was notorious because of the blind curve on the single-track line between Nashville and Memphis. Both trains were reported to be traveling at approximately 50 mph, or a closing speed of 100 mph.

Many of the passengers who perished were African-American defense workers from Memphis and West Tennessee en route to a gunpowder plant in Old Hickory, to the northeast of Nashville, to accept the numerous jobs that had opened up during World War I. Because of the prevailing “Jim Crow” laws in effect at the time, many passengers were riding in old wooden cars on the eastbound train. The impact from the collision reduced the wood cars to splinters as these were crushed by the steel-bodied cars of the opposing train. Those passengers who weren’t killed instantly died while waiting to be rescued in the remote cornfield. Within an hour, the horrific accident attracted thousands of onlookers and others wanting to help in some way. Local bootleggers offered their whiskey to the injured to ease their pain. Farmers from the area used their wagons to transport the injured to infirmaries. 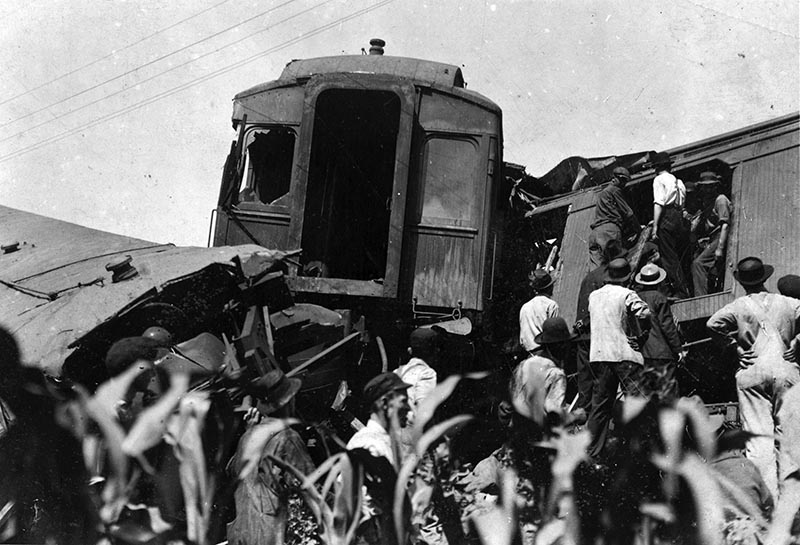 Many of the coaches involved were wood cars, making the carnage much worse for passengers in those cars when steel cars of the train bound for Nashville reduced the cars to splinters. Courtesy Nashville Public Library, Special Collections

By mid-morning on that hot July day, the railroad had dispatched all of its wrecker cranes and maintenance-of-way crews to the site to repair the track. The demolished locomotives and passenger cars were quickly removed. Remarkably, the NC&StL main line to Memphis was open for normal traffic shortly after sundown that day, and the event was consigned to the history books.

The Road to Dutchman’s Curve
The track associated with the Dutchman’s Curve train wreck was originally constructed in 1852 by the Nashville & Northwestern Railway. The new road was formed to link Nashville with northwest Tennessee, and proposed to continue west to St. Louis. In 1861, only a few miles were completed between Nashville and Kingston Springs when the Civil War broke out. The 168-mile N&NW was completed during 1867 between Nashville and Hickman, Ky. Ultimately, through train service between Nashville and Memphis was established under an operating agreement with the Louisville & Nashville, utilizing a connection at McKenzie, Tenn. The Nashville & Chattanooga Railroad leased the failing N&NW and ultimately absorbed it in 1873. The new merged railroad was renamed the Nashville, Chattanooga & St. Louis Railway. 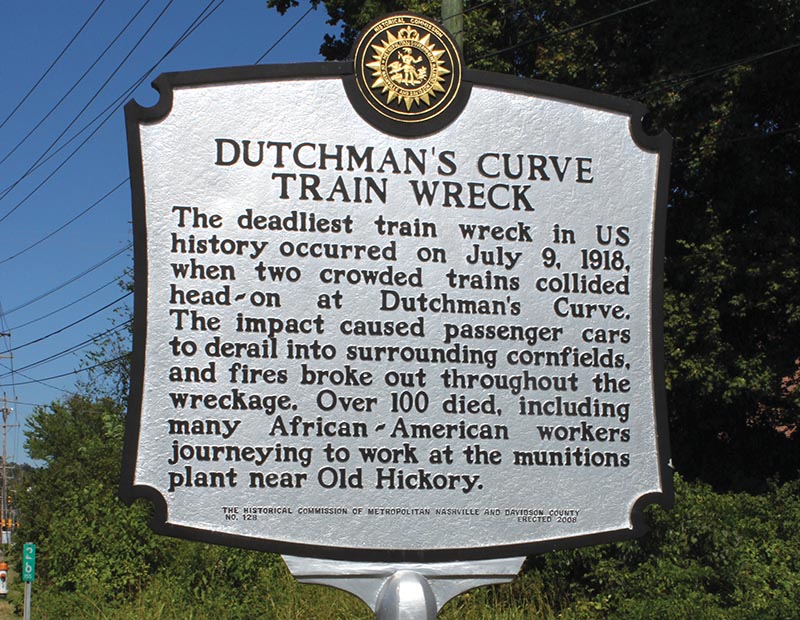 After decades of having no official recognition of where the wreck occurred or specific details of the tragedy, a historical marker was placed near the site on the 90th anniversary in 2008. Funds were raised by historians and community leaders, an effort led by local historian Betsy Thorpe. Photo by Ralcon Wagner

In 1890, the NC&StL opened its sprawling “New Shops” two miles west of downtown Nashville. Located on a 70-acre tract of land, the impressive complex included a foundry, boiler, blacksmith, coach and paint shops, and a 40-stall roundhouse. Much of the communication problems blamed for the head-on collision occurred at the shops moments before the tragedy when Train 4 was mistakenly cleared to proceed west onto the single track before the eastbound Train 1 had passed, as intended, in the yard. The NC&StL main between Union Station and New Shops was double-tracked.

Reclaiming History
Over the past century, the impact of the tragedy has faded. With the U.S. having weathered two world wars, the Great Depression, the Civil Rights movement, and a presidential assassination, the Nashville train disaster quickly faded from the memories of most people, becoming little more than a footnote in history. During the last few decades, the legendary train wreck would get only random mention in Nashville’s papers on occasional anniversaries of the event or on a slow news day when a filler story was required. Until the past few years, most Nashville residents did not know where the disaster took place.

It has only been in the past 20 years that the nearly forgotten history of the Dutchman’s Curve wreck sparked the interest of the general public. The result has been a renewed effort to reclaim the history of the country’s worst train disaster…