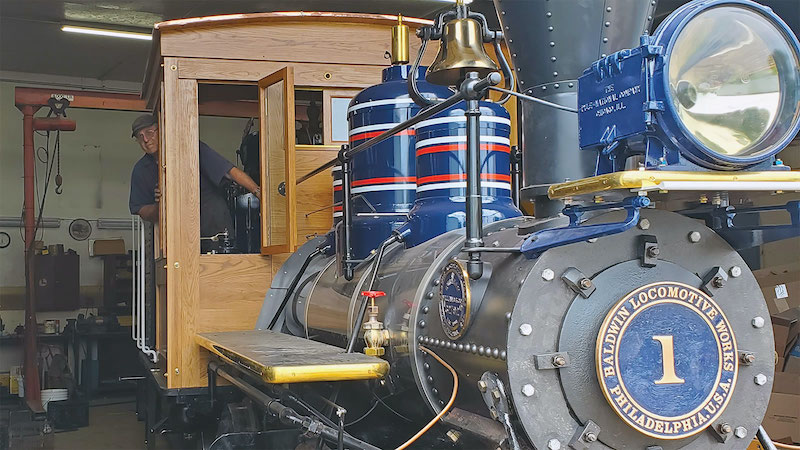 Owner Fred Haberkamp poses in the cab of Bock Lumber Company No. 1. The steam locomotive has undergone an extensive rebuild and will soon be ready for service. Photo Courtesy of Hoosier Valley.

NORTH JUDSON, Ind. — One of North America’s most unusual steam locomotives is coming to the Hoosier Valley Railroad Museum to operate on a long-term basis. Bock Lumber Company 1, an 0-4-4T built in 1908 by Baldwin Locomotive Works, is the only operating example of a standard gauge Forney-type on the continent.

“It’s unlike any other steam locomotive you’re going see out there. It really is quite impressive,” said museum treasurer Robert Barcus.

The engine is expected to arrive in early autumn but is not expected to pull passengers this year, allowing HVRM team members time to get acquainted with steam operations. The agreement with owner Fred Haberkamp was finalized as a six-year restoration effort nears conclusion, with FRA certification expected in several weeks.

Haberkamp persuaded his friend David Kloke of Kloke Locomotive Works to take on the challenge of transforming what was once a literal pile of scrap into a functional and attractive steam engine. Kloke, who gained renown for building full-sized, operational replicas of the historic Central Pacific “Leviathan” and Northern Central “York” locomotives, oversaw a process that included the replacement or rebuilding of key parts, fabrication of numerous missing and damaged parts, construction of a new wooden cab, conversion from burning wood to oil, the installation of a new boiler designed by Chris DeWitt, chief mechanical officer of the Nevada State Railroad Museum, and more. The paint scheme is colorful without being garish, blue and gray with red and white accent pinstripes.

The Forney design featured two powered leading axles followed by two unpowered axles in a trailing truck that supports the weight of the water tank and fuel bunker. They were set up to operate cab forward, but could easily be operated boiler-first, as became the standard on the narrow gauge in Maine, where a few other Forneys are preserved. They became popular for use on mining and logging operations and on the elevated railroads and early transit railroads of major cities like New York and Chicago in the late 19th Century, in part because an unflanged wheel on the second powered axle gave it superior ability to negotiate tight curves, while the distribution of water and fuel weight to the trailing truck provided constant adhesion weight over the drivers.

The engine spent its working career in Florida, first at Bock, then Hanbury Lumber Company and finally Maddox Foundry & Machines Works. It was saved by famed Michigan car collector, Barney Pollard in 1965, who owned a variety of steam engines in addition to his collection of roughly 1,000 cars. It did not fare well after leaving that collection though, ending up disassembled, rusting and incomplete in a scrapyard. The parts were rescued and moved to California by George Thaggard, who stored them for decades prior to selling them to Haberkamp.

The arrangement to host the engine was announced on August 20, following announcements over prior weeks that the museum would be the new home for several First Generation EMD diesels: a rebuilt SD9, the first Monon SW1, and a pair of BL2s built as Bangor & Aroostook 52 and 56.

The steam locomotive’s arrival will end a ten-year hiatus in steam operations at the museum, since the last visit of Fort Wayne Railroad Historical Society’s NKP 765 in 2011.