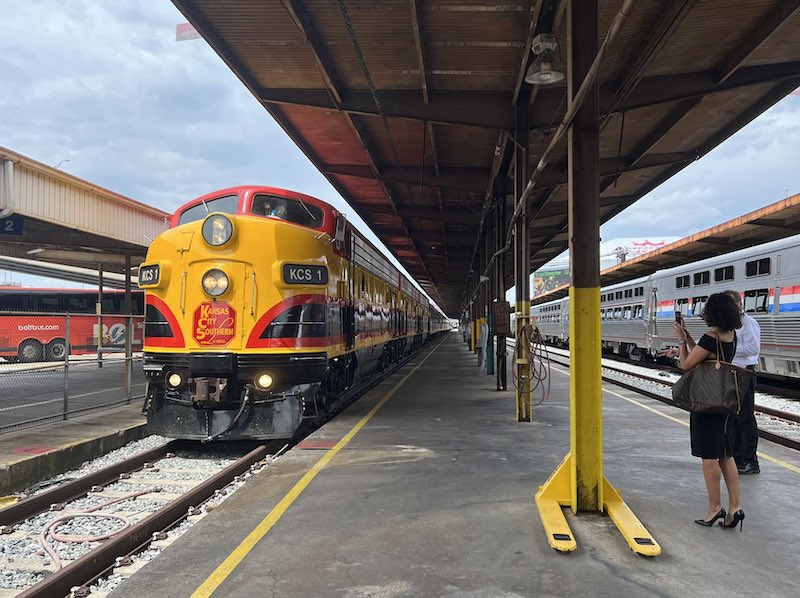 On Wednesday, state and railroad officials boarded Kansas City Southern’s business train to look at the 80-mile route between New Orleans and the state capital. Photo Courtesy of State of Louisiana.

NEW ORLEANS — Officials from Amtrak, Canadian Pacific, Kansas City Southern and the State of Louisiana boarded the KCS business train on Wednesday to look at the 80-mile route between New Orleans and Baton Rouge, a line officials say could soon host passenger trains.

Late last year, CP announced that if it was successful in merging with KCS, it would be willing to host at least one train per day between the two cities and maybe even more if capacity was improved. On Wednesday, Gov. John Bel Edwards was joined by the CEOs of CP, KCS and Amtrak to look at the line.

“The impending merger between the Kansas City Southern and the Canadian Pacific railways provides opportunities and renewed support to introduce the first-ever Amtrak service between Baton Rouge and New Orleans since CP has an agreement to host the trains,” Edwards said. “An Amtrak line connecting Louisiana’s capital to the largest metropolitan area in the state will have immense economic benefits for both cities and the parishes in between, allowing the state to compete with other major metropolitan areas. Not only will this service potentially reduce the number of vehicles on the roadways which will result in less traffic congestion, but it will also connect communities through employment opportunities and allow for more transportation options for festivals, sporting events, and concerts.”

The preferred route would be on KCS between Baton Rouge and the Louis Armstrong New Orleans International Airport, and then on Canadian National tracks from the airport into the Union Passenger Terminal in downtown New Orleans.