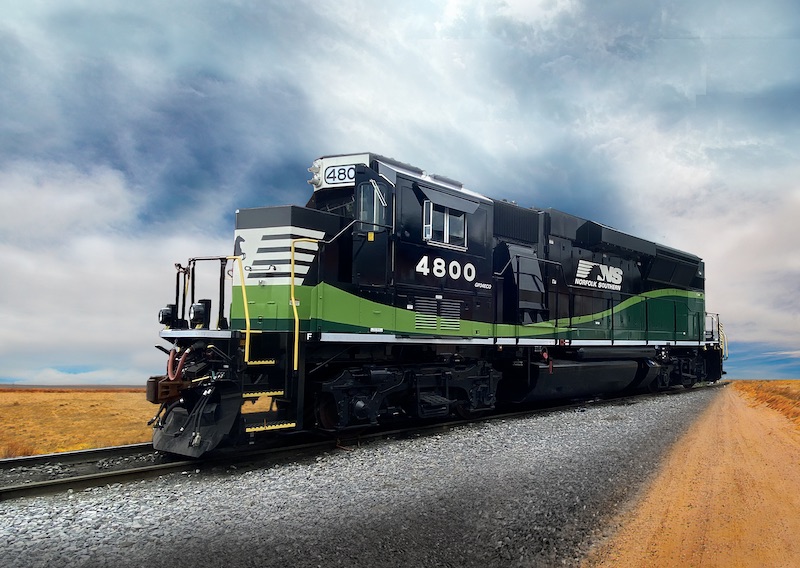 Built as Norfolk Southern 4630 in 1989, the locomotive received a new cab and other significant alterations to become NS 4800. Courtesy Photo.

ATLANTA — The cat is out of the bag. Progress Rail and Norfolk Southern have announced information about the first GP34ECO, the newest model in the ECO series of rebuilt locomotives and the first designed to meet Tier 4 emissions standards established by the U.S. Environmental Protection Agency. The joint announcement came on September 29 as the locomotive was beginning Tier 4 compliance testing. It is expected to be assigned to Enola Yard near Harrisburg, Pa., sometime this fall.

The 3000hp unit is the first to use a Diesel Exhaust Fluid/Selective Catalytic Reduction after-treatment system in a North American line-haul locomotive application. The result is a 90 percent reduction in nitrogen oxide emissions and “significantly higher fuel efficiency,” the two companies claimed.

“In recent years, we have collaborated with Progress Rail to upgrade more than 100 locomotives that power our road and terminal operations. This new locomotive is another step forward in our modernization journey, and we look forward to achieving Tier 4 emissions certification,” said Norfolk Southern Vice President of Advanced Train Control Tom Schnautz.

While the DEF/SCR emissions reduction systems have become the rule in trucking and other diesel applications, the idea was resisted by railroads, in part because they would have to create and maintain systems to resupply the fluid, which is consumed continuously during operation. The fluid is sprayed into the exhaust stream as the first step in a process that converts most of the nitrous oxide emissions into nitrogen and water.

The first road locomotive attaining Tier 4 certification was the GE ET44AC in 2012, which employs Diesel Particulate Filters and an Exhaust Gas Recirculation system that pumps the filtered and cooled exhaust back through its GEVO prime mover. Rival EMD introduced its Tier 4-compliant SD70ACe-T4 in 2015, struggling with technical teething pains and market acceptance for several years. That model introduced the 1010 prime mover, a four-stroke design that is radically different from the two-stroke 567, 645 and 710 engines that have powered EMD products since 1939. It too uses Diesel Particulate Filters and proprietary technology to reduce emissions without DEF.

As with five of the six GP59ECO units produced in 2016, an EMD GP59 served as the core, but it would be hard to tell just by looking. Built as NS 4630 in 1989, it received a new crash-resistant cab and significant alterations to the appearance of its roofline in the process of becoming NS 4800. The Operation Lifesaver paint scheme it sported for three decades is also gone, replaced with the special two-tone green wave design introduced on the GP59ECO in 2015. The rebuilding project began shortly after 4630 was retired in 2019. It was first spotted with its new number and paint in mid-2020 and word quickly leaked that it would be a Tier 4 GP34ECO, making its existence one of the worst kept secrets in railroading.

The GP59 was a rare bird even when new. NS was the only buyer for the 3000hp EMD, buying 33 in 1989 along with three 1985 demonstrators. A dozen were rebuilt to GP59E specs at Juniata in 2014, and five others (and the last active NS GP50) served as cores for six GP59ECO units built in 2016. The rest of the GP59 fleet was sold at auction in 2020, with most going to Progress Rail, possibly as fodder for more GP34ECO’s if NS 4800 is a success. Two went to Carload Express and have been operating on Allegheny Valley Railroad in the Pittsburgh area.