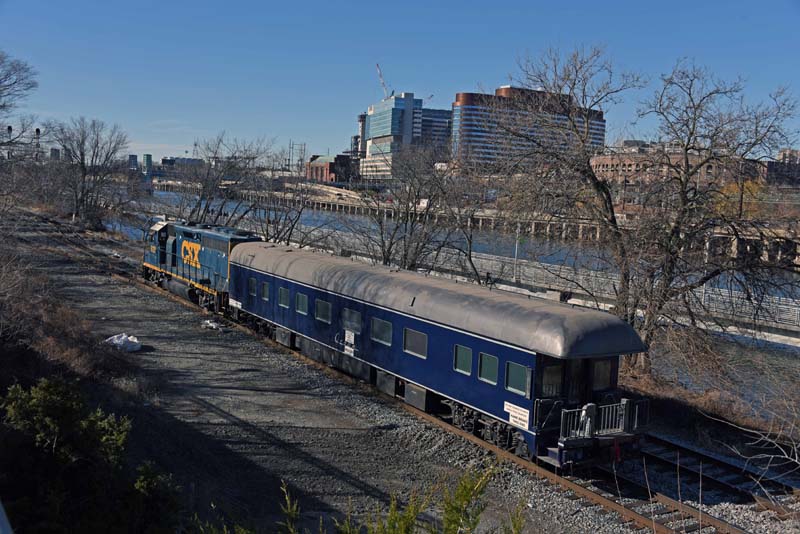 Norfolk & Western business car 300 rolls along the Schuylkill River through Philadelphia headed for eventual restoration in Indiana. Photo by M.T.Burkhart.

PHILADELPHIA, Pa. – A Norfolk & Western business car is headed to the Midwest for restoration and eventual operation.

On Saturday, Jan. 9, N&W business car 300 was pulled from storage in Philadelphia for the start of its journey to Valparaiso, Ind. It traveled to CSX ‘s Eastside Yard in South Philadelphia in a dedicated move (with CSX GP40-2 6129, which was built in 1975 for the B&O), and was then tacked onto the rear of freight Q404 bound for Selkirk, NY for eventual forwarding to Indiana for restoration.

In 2019, the nonprofit Norfolk and Western Business Car 300 Preservation Society Inc. was formed to accept the donation of the car, which had been stored in a warehouse for three decades.

“Once the car is fully operational, attention will be directed at the exterior of the car,” the society says. “We intend to repaint the car in its circa 1980’s Norfolk and Western scheme, complete with road number 300 and road name ‘Roanoke.’”

Built by Pullman in 1917 for the United States Railroad Administration, it was sold to the N&W in 1920, modernized in 1955 and deemed surplus and sold in 1977. Privately owned and renamed “Ocean,” it went into storage in 1991 and was donated to the society last year.

The plan is for the 300 to operate on the Little River Railroad in Michigan. For more, or to donate, visit www.nw300.org.