A trio of Delaware-Lackawanna Alco RS-3s roll past Bridge 60 Tower in Scranton, Pa., on June 24, 2010. These units are still earning revenue more than 60 years after they were built. Darryl Rule photo 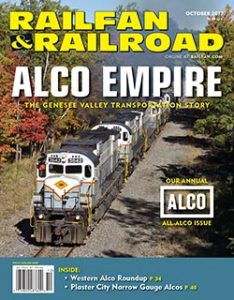 This is what it means to be a modern: the world of tomorrow is always better than today. Many Americans no longer believe this to be universal, yet when applied to technology, this attitude remains strong. For example, when Apple unveils a new iPhone, people camp overnight in front of the store, clamoring to be among the first to own the latest new model.

This phenomenon can be seen on the railways, as well. In 2010, Amtrak placed an order for new Siemens ACS-64 City Sprinter electric locomotives meant in part to replace their fleet of Bombardier HHP-8 locomotives, the eldest of which was then only 11 years old. Freight railways, meanwhile, have been rapidly shedding diesels built as late as the 1990s in favor of newer, yet more efficient models.

Regulation plays a large part in such changes, but there are other motivations that are just as powerful. Most originate with finance departments or investor pressure — the economic principle of amortization, the belief that all physical objects have a useful service life and once that time is up, their costs of care will exceed their usefulness. Another force that pushes for modernization on railways is a constant search for improved productivity, the ability to do more with less, and thus increase the profit margin. A term often bandied about by rail executives is the “operating ratio,” which means the company’s costs as a percentage of overall income. It is this attitude, not regulation, that brought the world one-man remote-control switching operations, that closed depots and laid off depot operators in favor of radios and dispatcher control, that replaced the caboose with a telemetry device that hangs off a coupler.

Despite these examples, railway companies are often of two minds about change, and have long exhibited stubborn adherence to traditions that seem bewildering when seen alongside modernization efforts. One, of course, is a kind of antiquated frugality in which almost nothing is ever thrown away. Old freight cars, long past their useful revenue life, continue onward as work equipment. Passenger cars built before the Great War are repurposed into storage sheds or impromptu office spaces. Low-traffic sidings and spurs use rail bearing 19th century date stamps from long-gone steel rolling mills. And this is just on the big Class I companies. On many shortlines across the country, this frugal tendency is even more in evidence.

Why do this? As the novelist Herbert Gold, who is now 93, recently told the Washington Post, “As you get older, nostalgia becomes a problem.” Mechanical, cultural, and visual persistence in a world where rapid technological advancement is accepted as a given puts the perception of railways in jeopardy. All too often, outsiders in the public, in political leadership, and in the investment world see this tendency as intransigence and arrogance at best, or evidence of anachronism and unprofitable nostalgia at worst.

I prefer to see it more positively. When some railroad continues to roster locomotives from a long-extinct builder — as you will read about in many of this issue’s stories — it is evidence of a more deliberate approach to the world. Too often, old things get thrown away merely because replacement is cheaper than a fix. These survivors are from an alternative world, where old things still have value, so long as we remember to care for them. To me that’s not nostalgia, that’s hope.