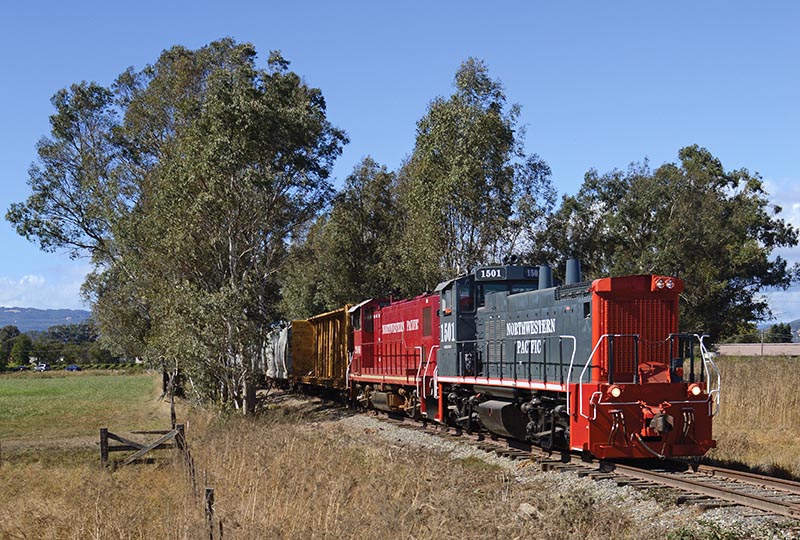 Northwestern Pacific MP15DC 1501 and genset 2009 have just crossed Route 12 in Schellville with two weeks’ worth of interchange for Lombard on October 2, 2016. The track alignment through here allows for well-lit photos in the morning and afternoon. 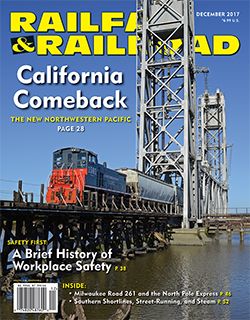 The quiet of an early Sunday morning in Schellville, Calif., is broken by the cough of an ancient diesel engine coming to life. Wearing faded gray and scarlet paint reminiscent of the old Southern Pacific, GP9 No. 1922 is gently moved clear of the high fence protecting the entirety of the Northwestern Pacific’s locomotive fleet. After a crew briefing, the geep rounds a curve and faces east to head toward Brazos (although this would’ve been considered timetable westward in the days of the SP). The real action, however, is leaving town on Ramal Road kicking up dust. A well-weathered Dodge Durango, equipped with hi-rail gear and decorated with an NWP logo is pointed toward Brazos. Getting from Schellville to there isn’t even half of the job facing general manager and jack-of-all-trades Jake Park this morning.

A few hundred feet followed by a couple hundred stairs, and Jake has an incredible view of the San Pablo Bay from the landmark Brazos Lift Bridge. The power is turned on to the bridge’s electric motors and a marine air horn is blown to provide warning to the barely existent boat traffic on the Napa River. After the span is in place and locked, a signal is given through the fog to the patient crew on No. 1922 to “bring ’er on through.” Jake keeps an eye out for any river traffic as his crew picks up interchange from the California Northern Railroad (CFNR) a couple miles down the tracks at Lombard. Before long, another signal is passed and the 1922 clatters over the bridge with slightly more than a handful of cars for industries around Petaluma. The bridge process resumes in reverse, and before long the Durango is crossing from Napa back into Sonoma County. Mr. Park’s bridgetender duties have only just begun… 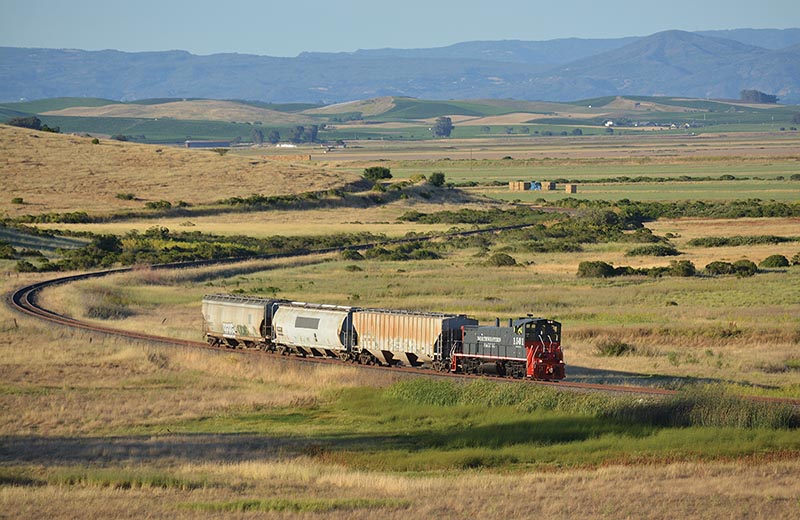 Seen from an Adirondack chair in the shade of a tree at Rams Gate Winery, the Sunday afternoon crew is westbound at Fairville on June 18, 2017. The bit of green hanging on this late in the spring was nearly florescent two months before, and will be nonexistent in another month as California’s summer takes hold.

Espee in the Redwoods
The NWP of old made its name hauling northern California timber products, formed as a joint venture of the SP and Santa Fe, consolidating some 42 different railroads to form a continuous rail line from Schellville to Eureka, 284 miles north (SP east) of San Francisco. The Santa Fe bowed out at the beginning of the Great Depression and the NWP rolled on relatively unscathed as a subsidiary of SP. Railfans outside of the area discovered the railroad in the 1950s, thanks to a quirky passenger service known as the Redwood, provided by Espee’s lone Budd RDC. Outside interest continued into the early ’80s as SP made a habit of using multiple SD9s to haul heavy trains loaded with lumber, the foremost legal export of California’s north coast.

After a devastating fire in 1978 and severe floods in the 1980s caused interruptions in service forcing many mills to ship by truck, SP expedited its escape plan. The north end of the line from Willits to Eureka became the Eureka Southern in 1984. By 1989 the North Coast Rail Authority was formed to save the line from total abandonment. The North Coast Railroad began operations in 1992, also taking over what was by then the remains of the Eureka Southern. In 1993, the SP leased the line south of Willits to the newly formed California Northern (CFNR). Operational control was surrendered by SP to the NCRA in 1996 which began to operate the line as the first incarnation of the “new” Northwestern Pacific. EMD hood units painted in SP’s beautiful “black widow” scheme didn’t convey the financial desperation of the new operator and the new NWP lasted only until 1998. Following a years-long infrastructure rebuilding program, the NWP resumed service between Schellville and Cotati in 2001 before being shut down a month later. A decade of darkness descended upon the legendary Redwood route. 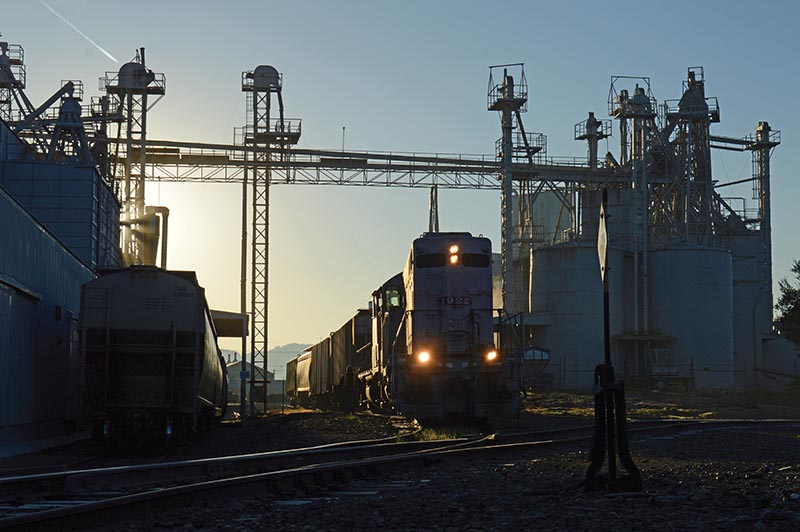 The frosty morning of December 28, 2016, in the North Bay finds NWP 1922 switching Hunt & Behrens Feed on the former P&SR mainline just east of downtown Petaluma. Crews can spend hours switching around town in a frequently dizzying array of moves.

NWP: Take Two
The second incarnation of the “new” NWP technically began in 2006, with the NCRA awarding an operating contract to the new railroad led by John Williams. However, it would be five long years before a wheel was turned and regular freight service resumed.

The recent history means little this morning, though. Weekend traffic begins to pick up in the nine o’clock hour as the Durango veers off the highway at Black Point. It’s another walk out the deck of a bridge to a shack still adorned in faded SP maintenance yellow. Jake soon emerges from the shed with a pair of boat oars. A bit of exercise is necessary to navigate the rowboat to the pivot of the center-swing bridge.

After a quick inspection, the now-familiar sound of a marine horn alerts residents and fishermen to the presence of the NWP before the train can be heard. Another hand signal is passed and the process is reversed after the train passes. More recently, Black Point has been set up for remote electrical operation via control boxes at either end of the approaches to the bridge. Jacob Studer is the general manager now, and is able to operate without a rowboat, but instead with the frustration of getting the bridge to line up correctly from a couple hundred feet away. With the usual lack of a bridgetender here, the conductor will have to line the bridge back behind for river traffic, giving ample time for a railfan to get back ahead of the train 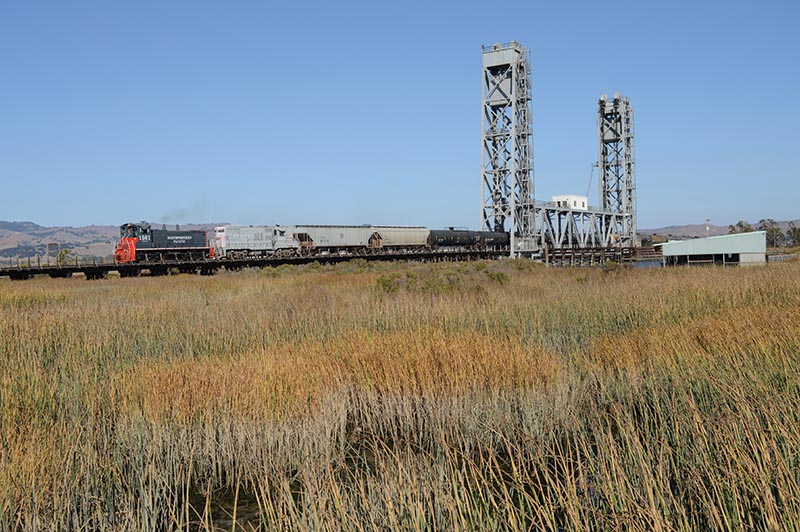 From the opposite side of the river in the hamlet of Brazos, a Sunday afternoon crew makes its way west with feed for Petaluma and tanks for storage at Schellville on September 11, 2016.

The pace is about to quicken in the cab. Not far up the tracks is the wye at Ignacio and entrance onto the Mainline Subdivision of SMART, the new Sonoma-Marin Area Rail Transit commuter railroad which began operations in August 2017. More than $500 million was granted to the NCRA in 2007 to rebuild the NWP and a portion of former SP track from Lombard to Schellville to not only encourage freight but ultimately to host commuter service for the growing communities north of the bustling Bay Area.

The Mainline Subdivision starts at San Rafael (once a town on the line from Ignacio to Tiburon leading to ferries for passengers and freight) and heads northward more than 50 miles to Windsor. It is here that the NWP encounters its greatest operational challenges despite the 45 m.p.h. track speed. Gauntlet tracks at stations with platforms that weren’t built to accommodate freight equipment had to be lined into and out of by hand for months. The newly rebuilt Haystack Bascule Bridge just outside of Petaluma has been prone to problems, including subsequent delays and the occasional stranding of NWP freight trains. A new wayside signal system took over a year to get the bugs worked out. Flooding and washouts continue to plague the railroad during California’s winter rainstorms, and most recently, wildfires disrupted service as they wiped out some neighborhoods bordering the tracks…

Read the rest of this story in the December 2017 issue of Railfan & Railroad!