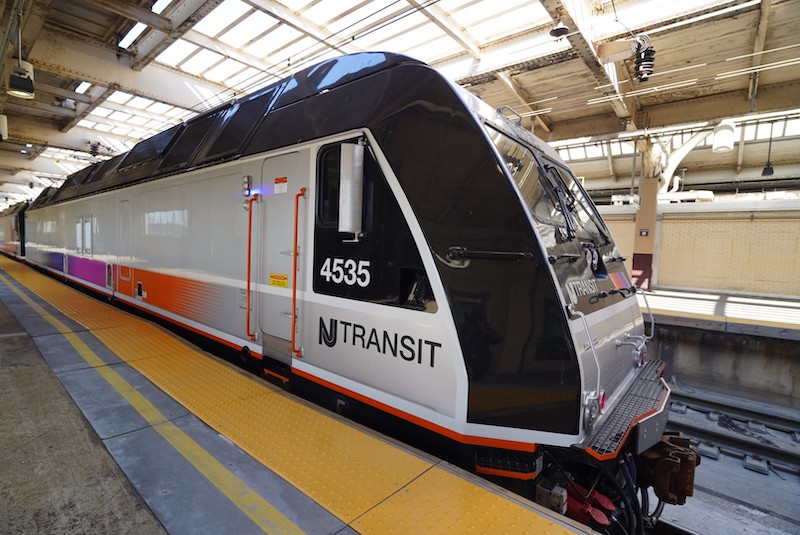 The new ALP-45 locomotives will replace New Jersey Transit’s fleet of PL42ACs that were built between 2003 and 2006. Photo Courtesy of NJ Transit.

NEWARK — The first of 25 brand new Alstom ALP-45 locomotives will begin testing on New Jersey Transit this week. On Tuesday, NJT officials were joined by New Jersey Gov. Phil Murphy for a celebration to mark the occasion at Newark Penn Station.

The new dual-mode locomotives will replace the unreliable PL42ACs, which were built between 2003 and 2006. NJT was the only railroad to buy PL42ACs. The new locomotives will join a fleet of 35 ALP-45DP dual modes (numbered 4500 to 4534) that NJ Transit purchased a decade ago.

“Since day one, our administration has been committed to building a better, more reliable, and sustainable NJ Transit,” Governor Murphy said. “This locomotive is the first of 25 that will reinvigorate the NJ Transit fleet with new, environmentally-friendly equipment. New Jersey commuters deserve only the best, and that is what we are delivering to them today.”

The new locomotives meet EPA Tier IV requirements, something the PL42ACs they are replacing could not do even if they were rebuilt. The ALP-45s also offers a significant increase in horsepower, acceleration and available head-end power than the older locomotives, according to NJT officials. The ALP-45 locomotives are designed to operate push-pull passenger train service on both electrified and non-electrified lines at speeds of up to 125 mph in electric mode and up to 100 mph in diesel mode.

“These new dual-power locomotives deliver on Governor Murphy’s commitment to make capital investments in NJ Transit, improve service reliability, and improve the environment,” said NJDOT Commissioner and NJ Transit Chair Diane Gutierrez-Scaccetti. “They produce zero emissions when running on electric power and have fewer emissions when running on diesel power than the all-diesel locomotives they are replacing.”