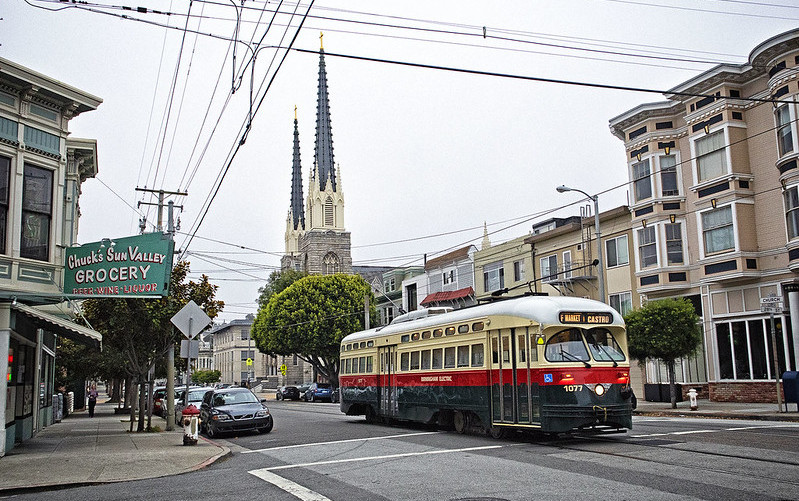 A MUNI PCC streetcar runs up Church Street in the Noe Valley of San Francisco in July 2018. MUNI is considering using PCC streetcars on this line on a regular basis. Photo by Justin Franz.

SAN FRANCISCO — San Francisco’s colorful fleet of Presidents’ Conference Committee streetcars could be getting more work in the coming years if a proposal to regularly run them on the city’s J-Church line gets off the ground.

Earlier this month, the San Francisco Municipal Transportation Agency board of directors passed a resolution ordering MUNI to consider putting PCCs into service on the J-Church line, which stretches from downtown to Balboa Park by way of the Noe Valley. Presently, that part of the city is served by LRVs which run above ground on the south end and below ground, through the Market Street subway, near downtown. However, the south end of the J-Church line, which stretches through the scenic Noe Valley, does see the historic PCCs, usually first thing in the morning and late at night. That’s because the streetcars use the J-Church to get from the carbarn to their regular jobs on the F-Line along Market Street and the Embarcadero.

The SFMTA board wants MUNI to consider replacing the LRVs on the J with PCCs to alleviate congestion in the Market Street subway, which is where four or five different routes converge underground. Under the new plan, the J line would be an entirely above-ground operation utilizing PCCs.

Market Street Railway, the non-profit group that advocates for the continued use of historic transit in the city, has come out in favor of the plan and said that there are plenty of PCC cars to support it (MUNI rosters more than two dozen of the iconic cars and has more that could be restored).