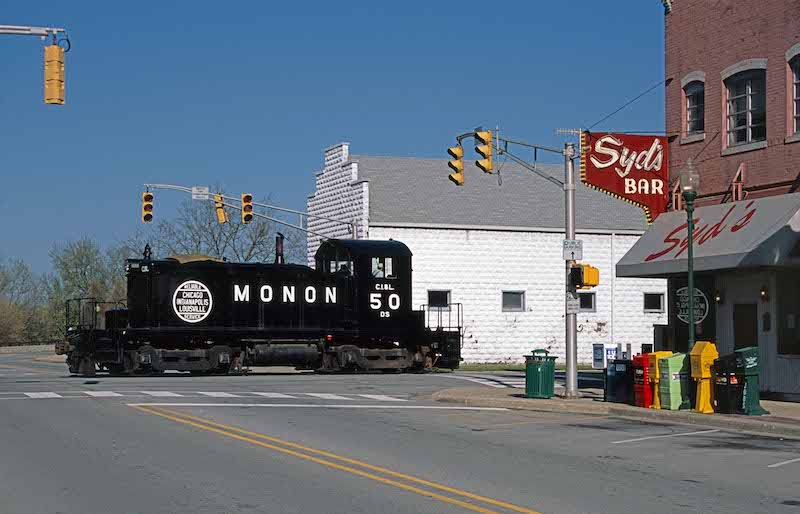 NORTH JUDSON, Ind. – Monon’s first diesel – decapitated during a move by truck several years ago – has found a new home and will be restored to service.

Hoosier Valley Railroad Museum announced over the weekend that privately-owned Monon SW1 DS-50 was moved to the museum and will eventually join its active roster. Built in 1942 by the Electro-Motive Division of General Motors, it was the very first diesel locomotive on the Chicago, Indianapolis and Louisville Railway, lending to its historic significance.

The switcher’s cab was destroyed in December 2018 when it struck a low bridge in Logansport, Ind. while being trucked out of the ill-fated Indiana Transportation Museum, which had been evicted from its long-time home in Noblesville, north of Indianapolis.

The SW1 was safely moved to the museum’s shops by Schlatter Brothers Transportation of Francesville, Ind. The museum said as part of the agreement to restore and operate the locomotive, a replacement cab has been secured in the St. Louis area. No timeline for the restoration was given.

“We’ve been working on saving this locomotive for almost a year now,” said Todd Flanigan, Hoosier Valley’s president. “There’s no way for me to fully express my gratitude to everyone involved in making this project a reality.”

In addition to the switcher, the museum also secured a caboose as part of the same agreement. Monon steel transfer caboose 81551 came to the museum in late March for its planned restoration. It was built in the railroad’s Lafayette, Ind. shops in 1956 and later served Louisville & Nashville.

Hoosier Valley was founded in 1988 and runs between North Judson and English Lake. It rosters more than 30 pieces of equipment, with the centerpiece being Chesapeake & Ohio 2-8-4 2789. Operational diesels include Erie Lackawanna Alco S1 310 and Interlake Steel Corp. GE 95-tonner 11.