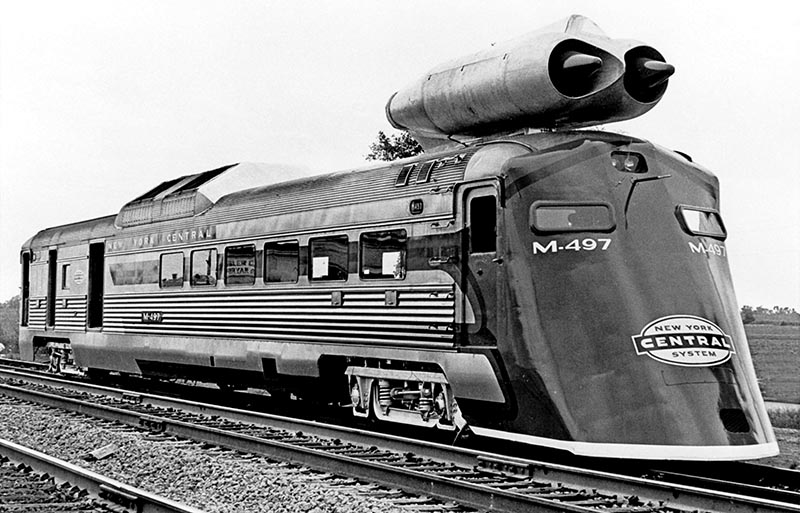 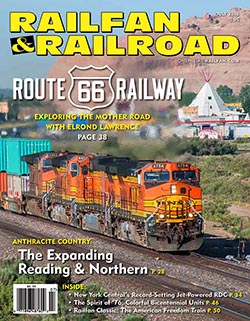 By Otto M. Vondrak/photos from the collection of Don Wetzel

In his dramatic takeover of the New York Central, investor Robert Young recruited Alfred E. Perlman from the Denver & Rio Grande Western to be his new president. When they assumed control of the railroad in 1954, they found a company in dire straits. Chief among the burdens was passenger service. Rail travel was in decline through the 1960s as passengers flocked to jet airliners or took advantage of the newly constructed interstate highway system. With the loss of lucrative mail and express contracts, passenger trains quickly became a money-losing proposition for American railroads.

While it seemed like passenger trains were headed for oblivion, Japan launched its ambitious Shinkansen “bullet train” in 1964, one of the first large-scale high-speed rail projects in the world. The new trains connected Tokyo and Osaka at speeds of up to 130 m.p.h. on a newly constructed, dedicated right-of-way. As a result of Japan’s successful program, policy makers began to look at high-speed rail as a solution for linking America’s largest cities. 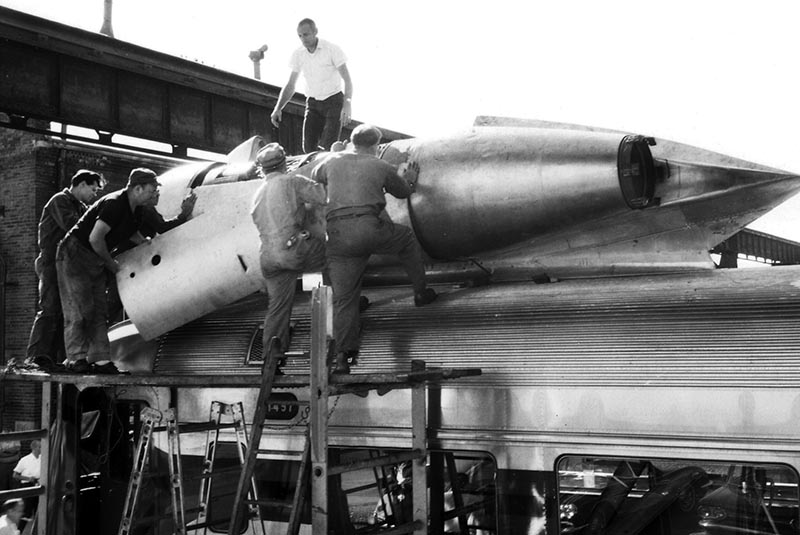 Power was provided by two General Electric J47-19 jet engines, purchased as surplus from the U.S. government. They were delivered from Davis-Monthan AFB in Tucson, Ariz., where they had been used as boosters on Convair B-36 Peacemaker aircraft. Each engine was capable of producing 5,200 pounds of thrust.

With his strong background in engineering, Perlman was always looking for ways to increase efficiency and reduce costs. As a result, the railroad opened the Cleveland Technical Center at its Collinwood Shop in Cleveland, Ohio, in 1957.

The Technical Center worked on a number of railroad research projects, from testing fuels and lubricants, to strengthening rails and infrastructure, to finding better ways to pack and load freight cars. The idea of using jet technology first came up in 1965, when it was proposed to convert an EMD F-unit to work off a jet turbine. The proposal was shelved, but not forgotten.

On May 6, 1966, the Pennsylvania Railroad announced the launch of a new high-speed rail initiative that would be funded by the federal government through the Department of Commerce (later the Department of Transportation). The program would design, test, and launch new “corridor cars” in an effort to improve service between major cities on the New York-to-Washington route. The result would be the 1969 debut of what became to be known as the Metroliners. 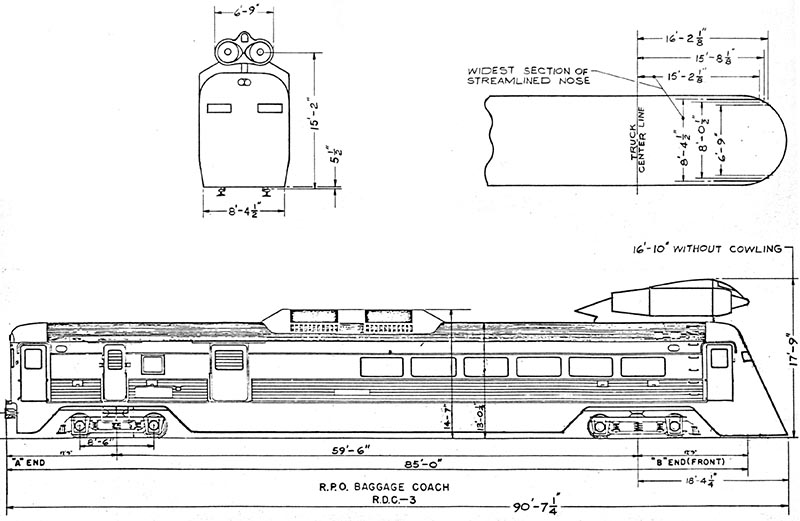 Don Wetzel’s wife Ruth, a commercial artist, developed the preliminary sketches that were used to create the ﬁnal design (ABOVE) for the special streamlined nose cone that would be ﬁtted to the car.

Was the Metroliner announcement enough motivation for the usually conservative Perlman to green-light his own high-speed project? With the Central destined for merger with its archrival Pennsy in less than two years, perhaps Perlman wished to demonstrate the technological superiority and financial independence of his company. In any event, Perlman called Tech Center director James J. Wright to approve the project at the end of June 1966. In turn, Wright tasked Don Wetzel to oversee the design. The only caveat was the experiment had to be ready to run in just 30 days.

Building the World’s Fastest Laboratory
After serving a stint in the Marines, Don Wetzel began his career in train service on the NYC in 1950, and crewed on steam, diesel, and electric locomotives. During one of his furloughs, he was asked if he had any other skills. “Yes,” thinking back on his aviation training in the Marines, he responded, “I’m a pilot.” This response landed him an opening at the Technical Center, and also a position flying the Central’s own B-25. His positions at “the Lab” included Lube Oil Tester, Chief Lube Oil and Spectrometric Analyst, Research Engineer-Mechanical, and Assistant to the Director of Technical Research.  It was this diverse background that led Wetzel to be in charge of the M-497 conversion project.

Rail Diesel Car M-497 was selected since the mail and baggage sections could be easily repurposed to house instrumentation. Built by Budd in 1953 as part of NYC’s 19-car fleet of “Beeliners,” M-497 was assigned to the St. Lawrence Division in New York State before being called to Collinwood for its date with destiny. 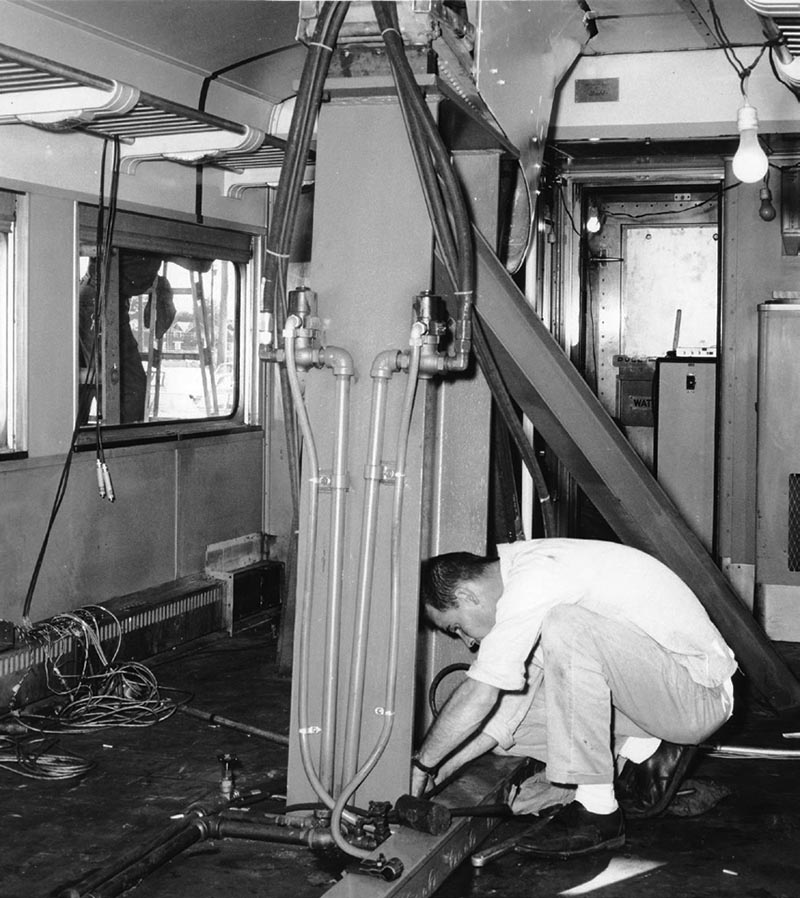 You don’t just put two jet engines on top of a train and hope for the best. Seats were cleared from the passenger compartment so a supporting pylon could be installed.

It was decided early on in the process that the use of roof-mounted jet engines versus any kind of direct drive would allow the test-bed to get up to speed quickly. Two General Electric J49-19 jet engines were purchased from government surplus. Each engine produced 5,200 pounds of thrust, designed as boosters for the Convair B-36 “Peacemaker” intercontinental bombers used by the Strategic Air Command.

Wetzel’s wife Ruth, a commercial artist, was first to suggest that the engines be placed at the front of the car, rather than the rear, for no other reason than it looked better. Don agreed, later stating, “I always found that if something looked good, it usually worked pretty well.” Ruth also designed the streamlined nose cone and distinctive black-and-gray paint scheme. The nose design was further refined after wind tunnel tests at Case Western Reserve University in Cleveland.

All fabrication took place in-house at Collinwood Shop. The car body itself was not disassembled in any way. The streamlined nose was built on a frame that was attached to the “B” end of M-497. Stock EMD F-unit number boards were used for the forward windows. The “A” end, which temporarily became the rear, was smoothed over to reduce wind drag. 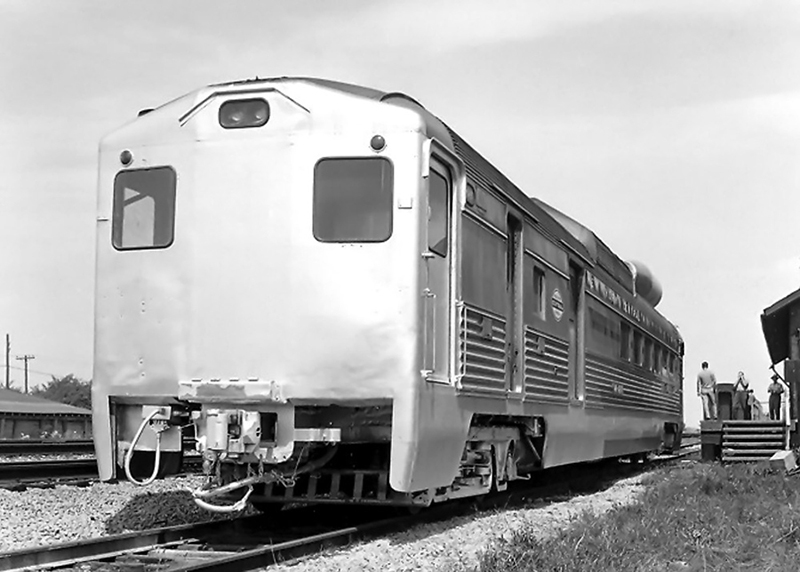 The A-end of New York Central M-497 temporarily became the rear, and was smoothed over with sheet metal to reduce wind drag.

Aside from being the project designer and eventual pilot, Don Wetzel was also in charge of the propulsion and controls installation. To gather data, more than 50 different instruments were installed in the baggage area to record speed, bearing temperature, and ride characteristics. The front axles were equipped with small radio transmitters to send telemetry stress information to on-board recorders. Data was recorded in real time on magnetic tape and by oscillographs.

The two Detroit diesel engines had been disengaged, but retained to provide power for the air brakes and electrical systems. The brake system relied on the stock Budd discs alone for stopping power. 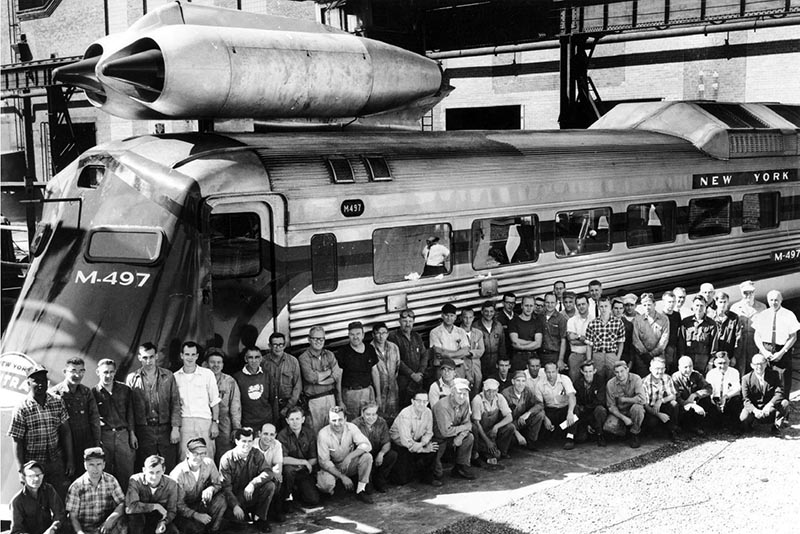 The ofﬁcial portrait taken outside at Collinwood Shop in July 1966 featured all of the people involved in the construction of the special project.

On a Straightaway in Ohio
New York Central vice president of engineering C.T. Pompa selected the 70-mile stretch of mainline between Butler, Ind., and Air Line Junction outside of Toledo, Ohio, for the high-speed tests. Pompa had the section resurfaced and upgraded to the highest standards, since up until that time the tracks had only hosted heavy freight and passenger traffic at conventional speed. The majority of the line was constructed of 127-pound Dudley rail in 39-foot lengths, with only one four-mile section of continuous welded rail.

The first speed tests took place on Saturday, July 23, 1966, on a 21-mile section between Butler, Ind., and Stryker, Ohio. The crew included Don Wetzel as pilot along with Leo Lombardo, Richard Shackson, and Lawrence Simmons monitoring the instrumentation in the baggage section. Perlman himself occupied the co-pilot’s seat alongside Wetzel for the historic run. The engines were fired up and M-497 was brought up to speed. “We were just holding on,” Wetzel recalled, “It was quite a ride!” 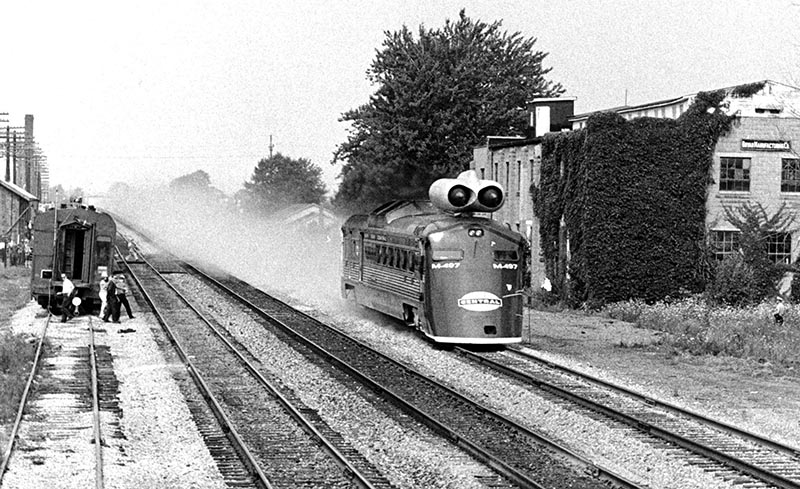 A Beechcraft Model 18D paced each run from above to monitor the tests. It was during the second run that Wetzel noted the car had reached 196 m.p.h., but his instructions were to be “at or around” 180 m.ph. by the time he had reached milepost 346 outside of Bryan, Ohio. The official speed record of 183.85 m.p.h. was recorded by the speed traps at milepost 347+14. Two 300-foot long traps were used to record the speed in case one had failed. Perlman ordered sandwiches and refreshments, and a modest celebration was enjoyed by all present. 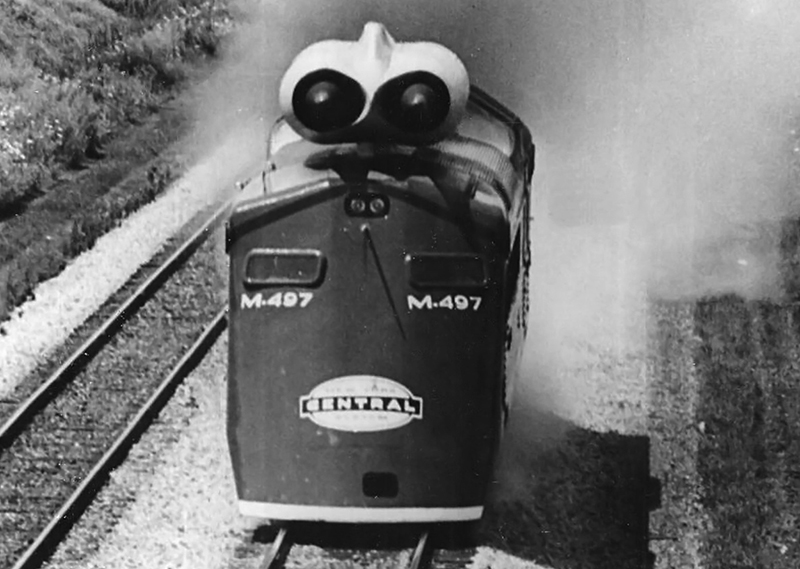 Two additional tests were run on Sunday, but at lower speeds between 90 and 144 m.p.h. due to the starter failing on one of the jet engines. Many of the technicians and craftsmen from Collinwood Shop rode one of the Sunday runs so they could enjoy the results of their work. A special press conference was held in New York City on July 26, 1966, with M-497 on display for the press and public at 60th Street Yard on the west side of Manhattan. It was there that Perlman asserted the railroad was not trying to build a fleet of jet-powered trains, but instead was answering the question, “Can conventional equipment operate on conventional track in high-speed service?”

The M-497 was towed to Beech Grove Shops in Indiana to convert the car back to regular revenue service. The streamlined nose was removed, motors were reconnected to the trucks, and seats replaced. Once it was released, M-497 returned to the mundane task of hauling commuters, this time in shuttle service between Croton-Harmon and Poughkeepsie, N.Y., on the Hudson Division. M-497 was conveyed to Penn Central in 1968 as No. 97, later renumbered 98. Conrail took ownership in 1976, and officially retired the unit in 1977. It later became part of the fleet acquired by the Metropolitan Transportation Authority in 1983. It was scrapped without fanfare or ceremony by Metro-North in 1984. 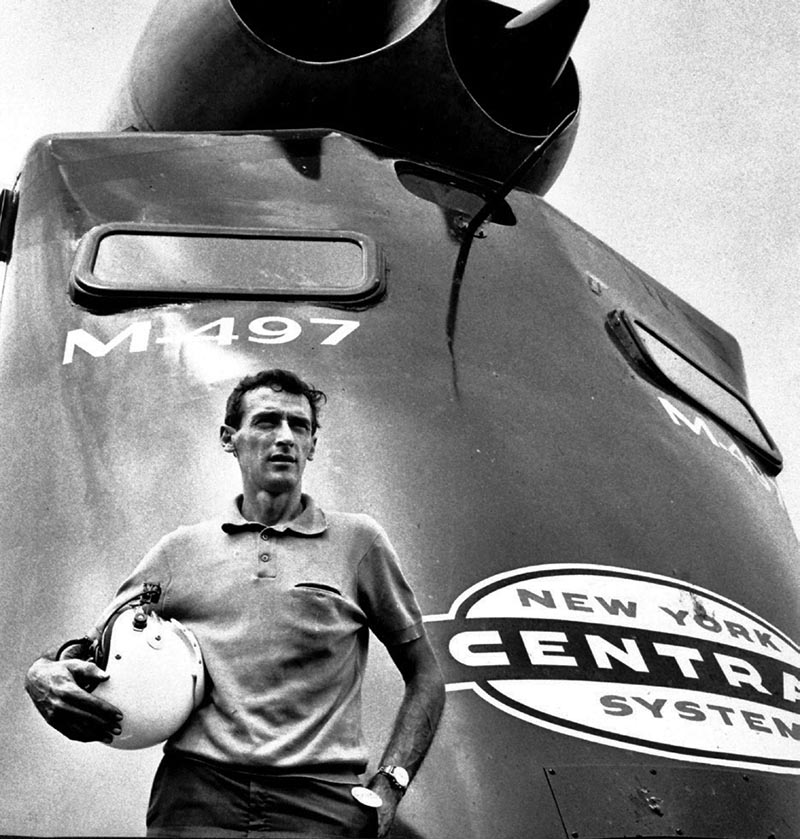 Lessons Learned
The M-497 experiment proved that high-speed service was achievable on a conventional right-of-way, even with jointed rail. Perlman emphasized the entire experiment was privately funded by the railroad with no government assistance. The cost of the project was estimated to be $35,000 (roughly equal to $257,000 today). As a result, valuable data on wheel-rail interaction and stress at high speeds was gathered and analyzed. As the New York Central was headed for merger with the Pennsylvania in 1968, there was hope the information would prove useful. The data was largely ignored, since the federal government was already committed to the Metroliner partnership with the Pennsy, and to the TurboTrain project with the New Haven.

Unfortunately, industry colleagues and competitors alike dismissed the M-497 experiment as a publicity stunt, largely due to the use of jet engines for propulsion. Of course, the jet engine was the only way to achieve high speeds in a testing environment, but was never seriously considered for implementation. Ballast and debris kicked up by the jet exhaust and high speeds posed a safety hazard for bystanders, while the inefficiencies of jet engines at low speed made them costly to operate. 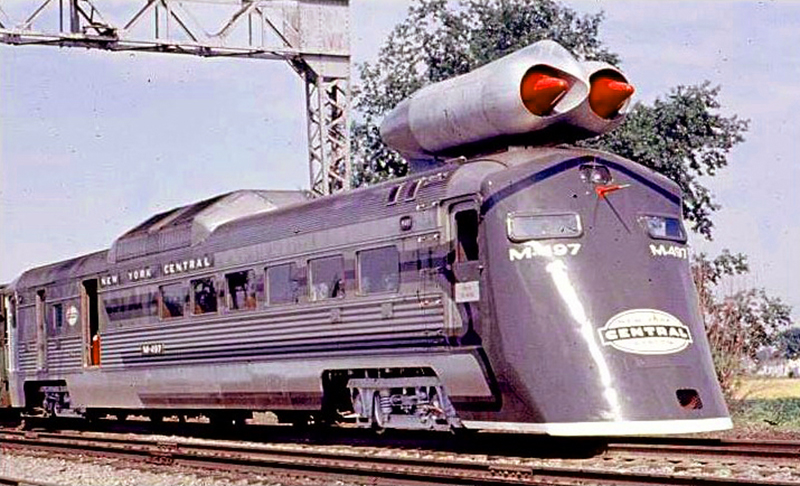 Shortly after the completion of the tests, many of the Central’s conventional long-distance trains were discontinued, including the flagship 20th Century Limited. Perlman himself believed the future of passenger trains would be limited to short-haul corridors of 300 miles or less, such as Amtrak’s “Empire Service” across New York State. Arguably, the success of the Metroliner project reinvigorated public interest in train travel and helped pave the way for Amtrak and additional investment in passenger rail.

Don Wetzel went on to work for the Norfolk & Western for three years before starting his own engineering company in 1970. He has since retired. Alfred Perlman joined the ill-fated Penn Central management team in 1968, but was ultimately forced out in 1970. He went on to rescue Western Pacific from the brink of bankruptcy before retiring in 1976. Perlman passed away in 1983.

The historic speed record was recognized with a plaque and dedication at Bryan, Ohio, in 2003. Despite trains like the Metroliner and later Acela reaching regular speeds of 150 m.p.h., no one has broken the American record set on a straightaway in Ohio 50 years ago.

P.S. — Please don’t ever call it the “Black Beetle.” It was a title applied by a newspaper writer, and Don hated it.

This article appeared in the July 2016 issue of Railfan & Railroad. Subscribe today!

Boy Scout crews have a long history of riding the ‘Southwest Chief’ to and from the Philmont Scout Ranch in New Mexico.

Jeff Willsie worked for Canadian Pacific before starting up his own short line in the 1990s.