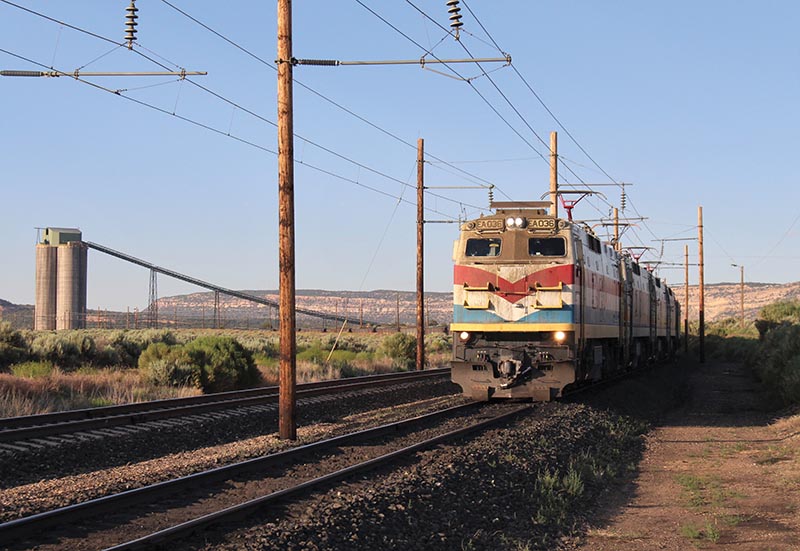 Black Mesa & Lake Powell E60C EA036 eases an afternoon train through the coal loadout near Kayenta on June 21, 2019. Trains moved continuously through the tipple at a rate of about 1 mph while cars were loaded. Loading time for a train was typically 60 to 90 minutes. Adam Twombly photo 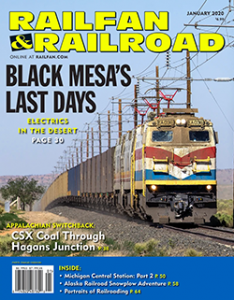 By Adam Twombly/photos as noted

Picture it: you’re standing in the middle of total desolation. The barren landscape hosts a few shrubs and grasses, but mostly the ground is sand that sinks beneath your feet. A gentle breeze wafts by. The moo of a distant cow is the only sound that disrupts the silence. Arizona heat begins to dissipate as a kaleidoscope of oranges, pinks, and purples streak across the sky. The perfect circle of the sun’s glow is interrupted only by a few small clouds hovering just above the horizon, and it outlines them in a brilliant gold. This is perhaps one of the most peaceful places on Earth.

Beside you sits a perfectly manicured right-of-way. Heavy welded rail shines under the last rays of light. Clean concrete ties rest in a bed of deep gray ballast. Within sight are dozens of evenly spaced wood poles lining the tracks, holding up catenary wire that stretches for more than 78 miles end to end.

Finally, the last slice of sunlight slips away. The blue hour has fully taken hold. But as one source of light disappears to the west, another glow appears in the east. Within seconds, a trio of lights pops out from behind a rock formation and a long train slithers toward you. Four sleek locomotives roll past followed by scores of loaded coal hoppers. The only sound is the smooth whir-r-r of wheels on rails. There is no roar of diesel prime movers brought to their knees; there are no flat spots; there are no squealing flanges.

This is a snapshot of what life was like on northern Arizona’s Black Mesa & Lake Powell Railroad. The operation made its last run on August 26, 2019. 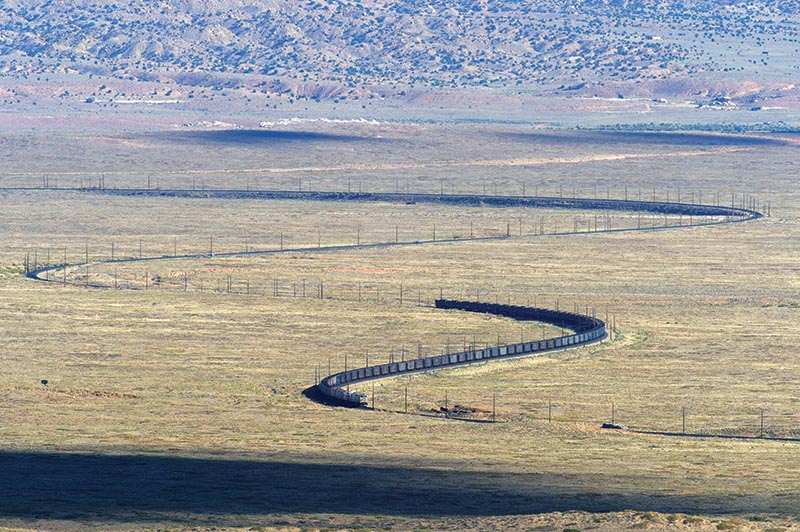 The only siding and the only substation on the line that actually had a name, Midway, was located some 42.5 miles from the Navajo Generating Station. The head end of another loaded westward train set negotiates the multiple reverse curves near milepost 49.0 on September 17, 2018, as seen from the top of the White Mesa. Philip A. Brahms photo

Power to the People
Construction of the Navajo Generating Station near Page, Ariz., began in 1969, and the station’s first unit began producing electricity five years later. In total, the plant had three units, each with the capability of producing 750 megawatts for a total of 2,250. The NGS was one of the largest power plants in the West. Run by the Salt River Project, the plant served four utilities in Arizona and Nevada. It also supplied the vast majority of the power needed for the Central Arizona Project, a canal diverting water from the Colorado River hundreds of miles southward toward Phoenix and Tucson. The power plant was even used to supply electricity for the railroad’s 50,000-volt a.c. overhead catenary.

Construction on the railroad began in February 1971. Although it was 78 miles long, the track layout of BM&LP was similar to many run-of-the-mill model railroads. At the Page end of the line was the railroad’s small yard, locomotive and car repair shop, and a loop track that passed through the power plant where hoppers were unloaded. Another loop sat beneath the silos and coal loadout at the eastern end of the railroad. A single passing siding was stationed between the two points. In keeping with a classic trait of railroads of the American West, the entire right-of-way was fenced in to keep grazing cattle, horses, sheep, and other animals off the tracks, and cattle guards were in place at every crossing. One of the most unusual characteristics of the railroad, however, was that it was completely isolated from any other rail line. 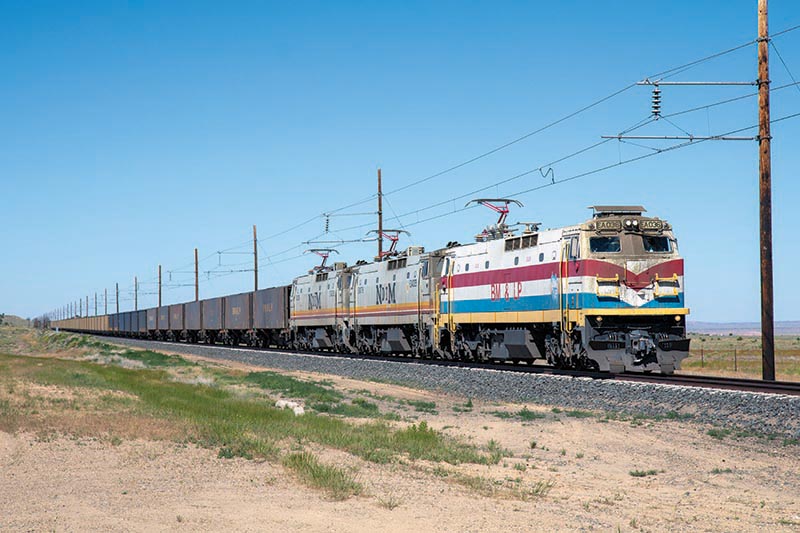 A morning mine train passes through Shonto, Ariz., with the only former NdeM unit painted into a Black Mesa & Lake Powell scheme leading a pair of sister NdeM motors. Charles Freericks photo

Opening in August 1973, BM&LP was built to transport coal from the mine and loadout near Kayenta, Ariz., to the massive Navajo Generating Station power plant nearly 80 miles to the northwest in Page. Once the power plant reached full capacity in the mid-1970s two trainsets ran between the mine and the plant simultaneously. In more recent years, typical operations usually saw three round trips between the power plant and the mine per day — one in the morning, one in the afternoon, and one overnight. Wednesday mornings were often an exception, with that time frame being reserved for track maintenance. Most loaded coal trains were made up of 60 to 90 cars…

Read the rest of this article in the January 2020 issue of Railfan & Railroad!