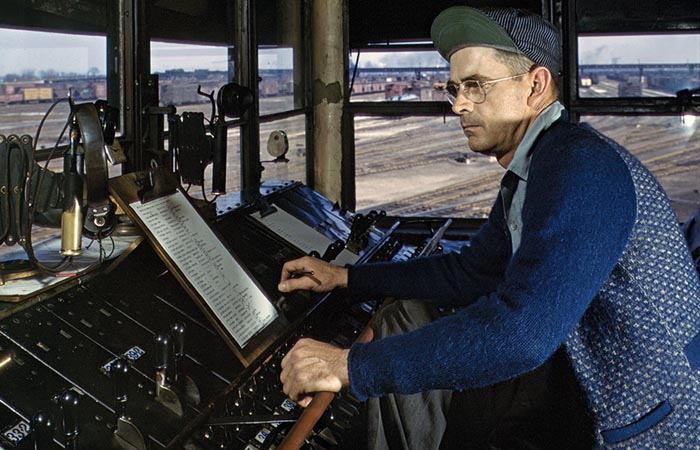 Jack Delano was tasked with photographing railroaders working hard to keep homefront supply lines moving during World War II, such as Robert W. Mayburry controlling the hump tower at Proviso Yard in May 1943. This photo and many more are the subject of a new exhibit sponsored by the Center for Railroad Photography & Art that will be installed at the Chicago History Museum this spring. Photograph by Jack Delano and courtesy of the Library of Congress, LC-USW36-588

By John Gruber/photos as noted

Founded in 1997, the Center for Railroad Photography & Art has become America’s foremost organization for interpreting the intersection of railroad art and culture with America’s history and culture. The Center’s largest project to date, Railroaders: Jack Delano’s Homefront Photography, opens at the Chicago History Museum on April 5, 2014. The project reveals the humanity, heroism, and diversity of the Chicago railroad community whose work was instrumental to the war effort during World War II. In 1942, photographer Jack Delano was tasked by the federal government to capture images of the rail community to rally support for the war effort. The result was three thousand images, many of which highlight Chicago’s primacy to the North American rail network. The dignity of everyday work and the stories of individual railroaders and their descendants are explored in more than 60 photographs by Delano.

When I first started thinking about this project, I did not even dream about such a magnificent presentation, one that would equal other major railroad art and photography exhibits of the last decade. This exhibit follows Railroad Vision (2002, Getty Museum, Los Angeles); Tracks (2008-2009, George Eastman House, Rochester, N.Y.); and Art in the Age of Steam, (2008-2009, Nelson-Atkins Museum of Art, Kansas City). I am confident that the new Railroaders exhibition will be remembered as equally groundbreaking. Spanning cultures and classes, Jack Delano’s iconic phots will be brought to life at the Chicago History Museum this spring. 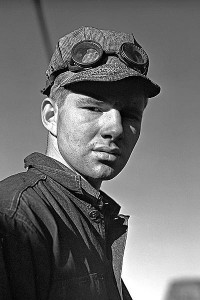 The idea started simply enough in 2008 with a call to Elaine Vander Schilden, widow of Illinois Central signal maintenance helper Harry A. Vander Schildren (1924-95), photographed in November 1942. Yes, we had the right person, she said, but the name was slightly skewed. That should have been our first warning, but we forged ahead regardless. We posted examples of Delano’s work on the Center’s website, railoadheritage.org. We selected creative work portraits with names attached to the portraits, ending up with 49 biographical sketches in the exhibit and catalog.

We did not know then that spellings of names, transcribed from the photographer’s handwritten notes would have errors. Finding the correct spelling of family names was the first of many challenges in writing the sketches. Mayberry turned out to be Mayburry, Gerdee was Jerdee, for example. But with census records, city directories, and other genealogical techniques, and with help from librarians and with cold calls to descendants, we located the families of 48 of the 49 portrait subjects. Jack Holzhueter helped from the beginning, and when Scott Lothes took over as president of the Center, he also took over primary responsibility for the project. As a result of our work to learn more about the people in these photographs, my wife and I were invited to a gathering of the family of Frank Williams (1887-1967), an African American who worked for the Illinois Central in Chicago.

Jack Delano (1914-97) made these iconic photos as part of an assignment to document the story of the nation’s railroad industry for the Farm Security Administration-Office of War Information (FSA-OWI). He and his wife, Irene, spent several months in the Chicago area in 1942 and 1943. While Delano photographed infrastructure and rolling stock, he also concentrated on the people who did the work of railroading. Roy Stryker, head of the photographic surveys for both FSA and its successor OWI, instructed Delano to document in pictures the importance of the railroad industry during wartime and the contributions made by railroaders and their families to World War II on the home front. Delano complied as he photographed children collecting scrap metal for recycling into war supplies, posters in public and private places promoting the sale of war bonds, and the ubiquitous flags that honored service men and women. 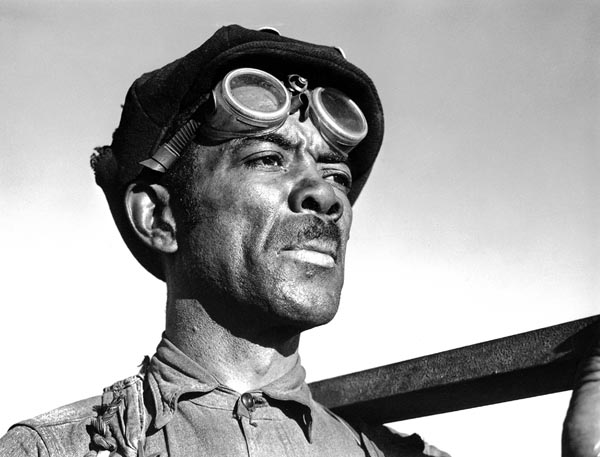 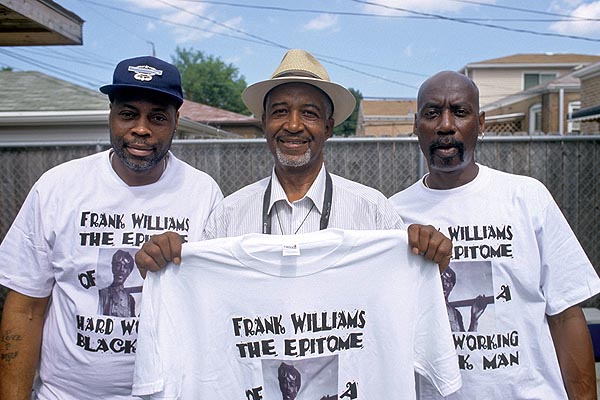 Delano and his wife appear to have had a gift, tempered by luck, for selecting portrait subjects who reflect America’s and Chicago’s variety of ethnic groups and social classes. Gary Sinise, a grandson of Italian-American Indiana Harbor Belt conductor Daniel Sinise, is a television celebrity who keeps his grandfather’s railroad watch under a glass dome on his mantel. 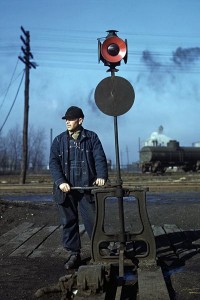 Indiana Harbor Belt conductor Daniel Sinise throwing a switch at Blue Island, Illinois, in February 1943. Daniel was the grandfather of actor Gary Sinese. Photograph by Jack Delano and courtesy of the Library of Congress, LC-USW36-722

In only a few short months (November 1942 through May 1943) Delano created perhaps the best overall portrait of railroading and its people and culture of any photographer in the United States. Indeed, the volume of photographs may constitute the largest such project in the world. The existence of Delano’s 2,500-plus railroad photographs in the FSA-OWI collection at the Library of Congress is hardly a secret. They were used in 1977 in James E. Valle’s The Iron Horse at War, a book that emphasized locomotives and operations.

After the war, Jack and his wife, Irene, moved to Puerto Rico. Their son Pablo Delano, born in Puerto Rico, photographed Chicago area descendants of his father’s portrait subjects for exhibition and catalog. Working with a Chicago area friend, Pablo arranged an exhibition of his father’s Puerto Rico railroad photos at the Segundo Ruiz Belivs Cultural Center, from April 5 to June 1, and also at the Chicago Public Library-Humboldt Park Branch from June 4-30, 2014.

The Railroaders exhibition demonstrates that the railroad industry—like ethnic, religious, and neighborhood enclaves—fostered its own communities and networks that cut across ethnic and religious lines. Through the stories of the lives of the men and women of railroading, the exhibition and accompanying programs and catalog demonstrate how the people of one industrial community represent, in microcosm, the vastness of Chicago society and, by extension, American society as a whole.

“Museums with photographic archives, take heed!” said Gary T. Johnson, president of the Chicago History Museum. In his introduction to the exhibit catalog, Johnson wrote, “There is much talk these days about the techniques of ‘micro history’—telling history from the ground up by examining what we can learn about individuals. This is a living example of that very approach, one whose inspiration lies in a collection of photographs.”

The Chicago History Museum is a destination for railroad historians. Its permanent exhibition, Chicago: Crossroads of America, has Chicago’s first locomotive, the Pioneer, and Chicago’s first “L” car, no. 1. The collaboration with the museum provides for more than “pictures on a wall.” The exhibition will also include artifacts belonging to the portrait subjects, modern photographs of their descendants, and even sound bites of interviews. Generous support of individuals and foundations alike has made this project possible. Sponsors include Bon and Holly French, the North American Railway Foundation, the Union Pacific Foundation, the Candelaria Fund, and David and Cynthia Kahler. Installed in the 2,000 sq. ft. Green Gallery, the exhibition will be open through August 10, 2015.

I have been interpreting Delano’s railroad photographs since Focus on Rails (1989) where I cited Delano’s work as an example of creative photography for railfan photographers. It continues a Center tradition, started with support of the North American Railway Foundation, of telling the human side of railroading. As I retire from the Center’s day to day activities, I plan to continue writing about railroad work and about Delano, who made the photos in wartime but whose railroad photography evokes many other themes, which may be more important and universal.

John Gruber is a founder of the Center for Railroad Photography & Art and previously served as president and editor of its journal, Railroad Heritage. He has been a free-lance railroad photographer since 1960, and received a railroad history award from the Railway & Locomotive Historical Society in 1994 for lifetime achievement in photography. He is author of several books related to railway history and art. He also edited Vintage Rails magazine from 1995 to 1999.