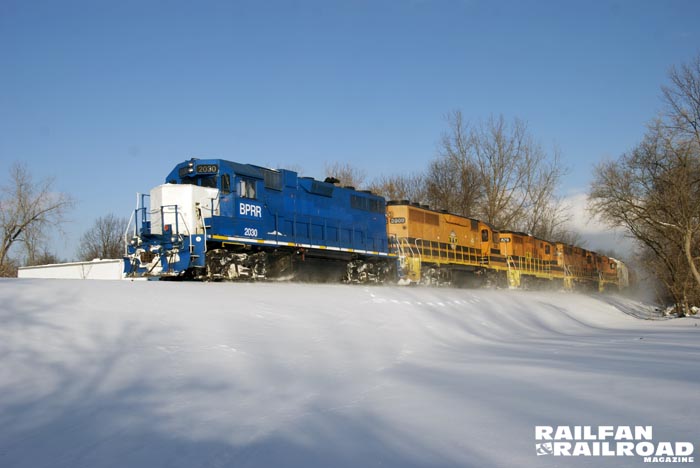 Rochester & Southern Train GW-1 hustles southbound empties back to the salt mine on former B&O rails just south of Scottsville, New York. Part of the Genesee & Wyoming family, the R&S was the company’s first expansion that would eventually lead to the development of an international empire of short lines. Photo by David Scheiderich

A survey team drilling for oil discovered large salt deposits around New York’s Wyoming County in 1878. Geologist Carroll Coker surmised that large pockets of salt could be found in Livingston County along the shores of the Genesee River, a worthwhile investment for any financier. The Genesee & Wyoming Valley Railroad was incorporated in 1891 to haul out mined rock salt to interchange. The line grew and was later reorganized as the Geneseee & Wyoming Railway and purchased by Edward L Fuller in 1899. The operation at Retsof, N.Y., would grow to become one of the largest rock salt mines in the world, creating a steady stream of traffic for the G&W.

In 1977, the grandson of the original owner purchased the G&W. Aside from family tradition, Fuller had a vision for the small railroad that went far beyond the borders of New York State. Genesee & Wyoming Industries was founded later that year, with the railroad becoming its first subsidiary. With the deregulation that followed the passage of the Staggers Act in 1980, the big railroads began shedding unprofitable branch lines to new operators. The G&W’s first step towards expansion was made in 1985 with the formation of the Rochester & Southern, operating over the former Baltimore & Ohio tracks from Rochester to Salmanca, N.Y. This was followed a few years later with the purchase of additional ex-B&O track from CSX forming the Buffalo & Pittsburgh to connect its namesake cities in 1988.

Of course, operations on the original railroad continued as they had for nearly 100 years. In 1994, the Akzo Nobel mines at Retsof flooded, and all operations were suspended a few months later. American Rock Salt re-established mining operations at nearby Hampton Corners, and a new branch line was built to serve it. Loadouts resumed in 1997, though by this time the G&W was no longer dependent on a single commodity for survival. 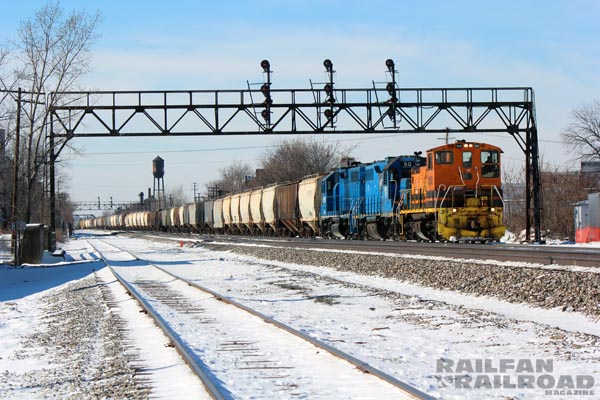 Loads of salt cross over at the former B&O-New York Central interchange at CP 373 on the west side of Rochester, N.Y., on January 30, 2014. The train is eastbound on the CSX main line, and will deliver a hundred cars to nearby Goodman Street Yard. Photo by Elliot Courtney

Today’s Genesee & Wyoming family of short line operations spans more than 10,000 miles of track across five different countries (including Australia and the Netherlands). Yet the roots of the company are firmly planted in western New York State, where the original Genesee & Wyoming hauled salt from mine to interchange over a 14-mile route. The original Genesee & Wyoming Railway was merged into the Rochester & Southern in 2003, though this was more of an operating formality than anything else. In 2012, G&W completed the acquisition of RailAmerica, forming the largest short line operator in North America.

Yet despite all of the growth and success, rock salt remains big business for the G&W. During a the winter months, a daily transfer run drags hundred-car trains of salt hoppers from the Rochester & Southern’s Brooks Avenue Yard directly to CSX at their Goodman Street Yard in downtown Rochester. The salt mined in Livingston County is destined for municipalities throughout New York and New England, including New York City.

Railfans lament as G&W’s orange and black colors take over colorful short lines around the country, yet each line manages to retain a unique identity. The original salt-hauling railroad continues to perform the job it was first built for way back in 1891. Despite the worldwide growth of G&W over the last 30 years, it is sometimes hard to believe that it all began in a hole in the ground in Livingston County more than 100 years ago.