The merger between Canadian Pacific and Kansas City Southern would create the first railroad to touch the United States, Canada and Mexico. Photo by Steve Barry.

On Sunday morning — just hours after news first leaked that a merger was in the works — the two Class I railroads announced their intentions to create the first rail network connecting the U.S., Mexico, and Canada. The new railroad will be called Canadian Pacific Kansas City.

The deal is worth $29 billion and will need the approval of the U.S. Surface Transportation Board. According to a press release, the boards of both companies are backing the deal.

“This transaction will be transformative for North America, providing significant positive impacts for our respective employees, customers, communities, and shareholders,” said CP President and Chief Executive Officer Keith Creel. “This will create the first U.S.-Mexico-Canada railroad, bringing together two railroads that have been keenly focused on providing quality service to their customers to unlock the full potential of their networks. CP and KCS have been the two best performing Class I railroads for the past three years on a revenue growth basis.” 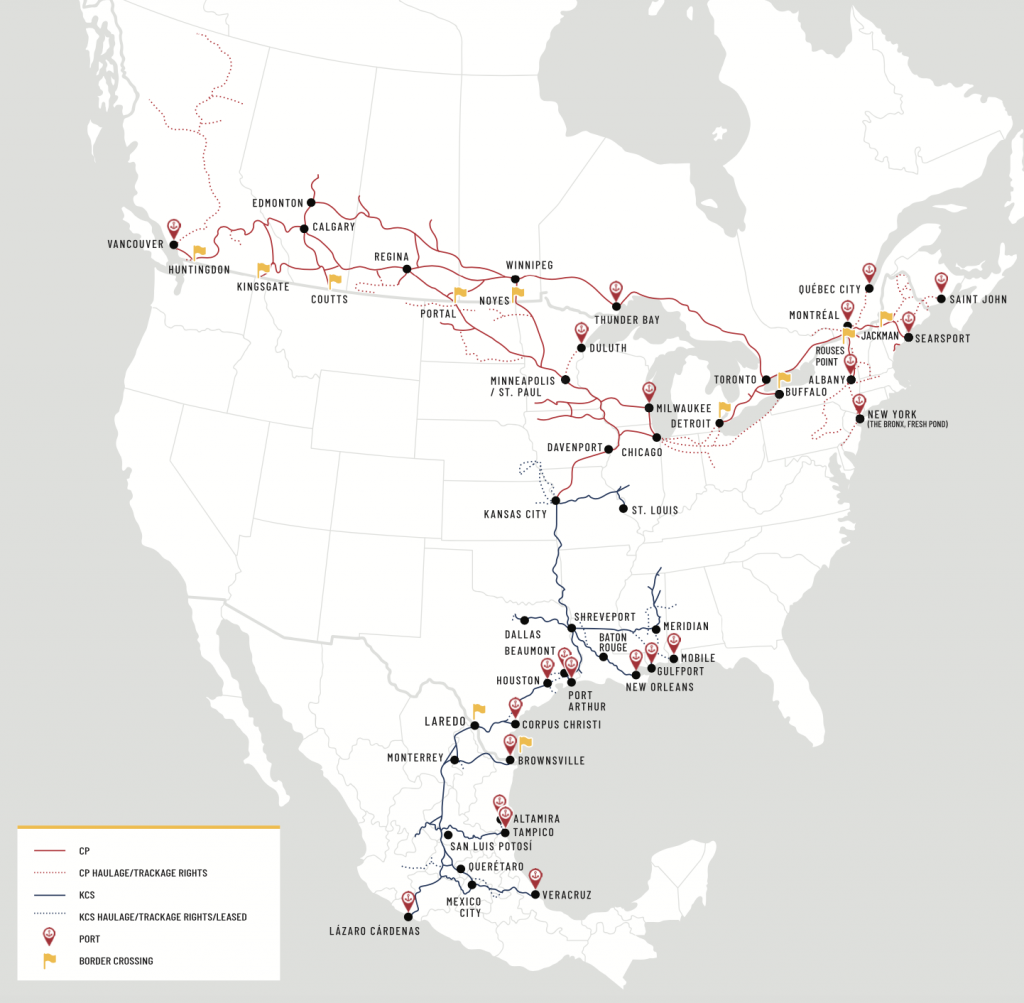 A map of the combined Canadian Pacific and Kansas City Southern network.

The deal values KCS at $275 per share, a 23 percent increase over its closing price on March 19. Following the closing of the sale and the formation of a voting trust, common shareholders of KCS will receive 0.489 of a CP share and $90 in cash for each KCS share held.

Calgary will be the global headquarters of CPKC, and Kansas City, Mo. will be designated as the U.S. headquarters. The Mexico headquarters will remain in Mexico City and Monterrey. Creel will serve as CEO. It was also announced on Sunday that CP had extended its contract with Creel through 2026.

“Today’s announcement speaks to Keith’s leadership and bodes well for the continued long-term success of CP, to the benefit of its employees, customers, communities and shareholders,” said Board Chair Isabelle Courville. “Furthermore, this solidifies Keith’s role in overseeing and leading the successful integration of CP with Kansas City Southern (KCS) and all of the benefits that transaction will bring.”

CP plans on establishing an independent voting trust to acquire KCS shares during the second half of 2021. KCS will remain in trust and its present board will continue to manage it until the STB approves the deal. CP officials expected the deal to be approved sometime in 2022.

The two railroads presently connect at Kanas City and the merger would create a railroad that stretches across three countries. Officials note that the merger will also allow some freight traffic to bypass the congestion around Chicago via CP’s route through Iowa. The railroads were also touting the environmental benefits of the deal, noting that the two railroads would have a direct connection between Chicago and Dallas, which could take hundreds of trucks off the highways.

“KCS has long prided itself in being the most customer-friendly transportation provider in North America,” said KCS President and Chief Executive Officer Patrick J. Ottensmeyer. “In combining with CP, customers will have access to new, single-line transportation services that will provide them with the best value for their transportation dollar and a strong competitive alternative to the larger Class Is. Our companies’ cultures are aligned and rooted in the highest safety, service and performance standards.”

This story will be updated.